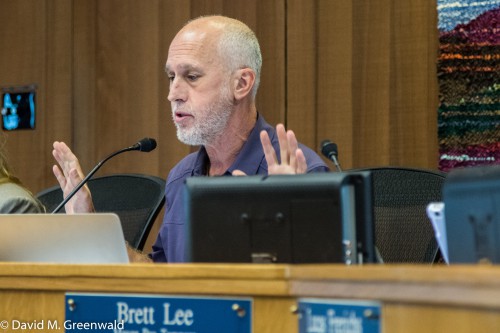 For months we had heard that the city’s fiscal situation had improved – and in some ways it certainly had – but beneath the good news was trouble.  The city’s infrastructure needs were critical and last spring the number of $655 million emerged.

One of the council goals has been to create a resilient fiscal budget, and yet the word we heard this week was not one of resilience or renaissance, but “insolvent.”  Insolvent in the sense that the city right now cannot meet basic infrastructure needs.  Insolvent in the sense that the city is going to have increasing difficulty meeting its pension and retiree health obligations.

We were dismayed to see city staff once again playing down these challenges, while we were encouraged to see the Davis Enterprise offer a front page story of the city’s growing unfunded liabilities.  Broad swaths of this community are unaware of the impending problems we face – the worst part is the problems are multipronged, long-term, and have no simple solution.

This situation is actually a good deal worse than it seemed last spring.  Mayor Robb Davis called the situation “urgent” and, despite efforts at cost-containment, there was a huge jump in the city’s unfunded liabilities for pensions.  That situation is only going to get worse because CalPERS (California Public Employees’ Retirement System) has not been able to sustain their targeted annual rate of return.

The biggest problem we face is that if we do nothing new in terms of salaries and benefits, the cost of maintenance increases.

As Mayor Robb Davis points out, if salaries grow by 3 percent, which is the level that CalPERS assumes and a level that keeps up with a traditional cost-of-living increase, “the pension contributions will require an additional $5.3 million per year.”  That is on a $60 million or so general fund.

Mayor Davis told the Vanguard, “If the average annual General Fund revenue growth of the past 15 years continues for the next five (the 15-year trend is 4.8% per year), fully a quarter of the increases will be consumed uniquely by pension and retiree medical cost increases.”

“Something must give,” he said.  “Thus, I am less sanguine than our City staff.  In fact, it is not clear to me at this point how we are going to cover everything over the next five years, given that we are not even covering critical infrastructure backlogs now.”

That is just one area of concern.  We have been hitting on the roads analysis for quite some time.  One analysis I saw is that, at the current level of funding for roads, we can expect them to degrade to about a PCI (Pavement Condition Index – the standard for evaluating pavement conditions) level of 37.  At the start of the recession we had it at 71 and it is currently at 63, one of the worst in the region.

That is the problem – it is serious, multifaceted and there is no simple solution.

Mayor Robb Davis said, “I believe we must discuss cost containment—broadly writ—and put a revenue measure before the population in the next two years.”

What does that look like?  The mayor said, “It is no exaggeration to say that over the coming 5 years (and beyond) we need an additional $15-29 million each year to cover all these costs combined.”

Rich Rifkin has long advocated for a total compensation growth gap.  He suggests limiting the growth of salaries and benefits to 2 percent per year.

That would be tricky – and it might not be enough.  First, employee groups would have to agree to that provision through the collective bargaining process (CBA).  Second, we have noted that even keeping compensation steady will add to the budget and that a 3 percent salary increase adds about $5 million to the budget annually.

The short-term answer is probably going to look like this.  First, some sort of cost-containment strategy.  The Vanguard was really critical, first that the city gave out small raises in the CBA to five bargaining units last year at this time.  The Vanguard has also been concerned about overly-rosy language coming from both elected officials and city staff, that plays down the severity of the city’s fiscal problems.

Second, as the mayor stated, we are looking at tax increases.  We have already increased sales tax by one percent since 2004.  There was talk about a parcel tax for roads.  There is already a small parcel tax for parks that is at $49 a year, but that is about a quarter of our current needs – which are expected to rise.

Third, the council sees TOT (transient occupancy tax) as the quickest revenue enhancement.  They have already approved Embassy Suites and the Hotel Conference Center, which settled its suit this week.  On Tuesday, they look to approve the Residence Inn, and in two weeks it will be Hyatt House.

But, at most, that is perhaps $1 million in TOT.  The bigger tickets were innovation parks and other economic development.  This is clearly the direction that they will ultimately have to head toward.

The biggest component will be bringing the community along – because, until now, the community has not been aware of just how “urgent” the situation is.