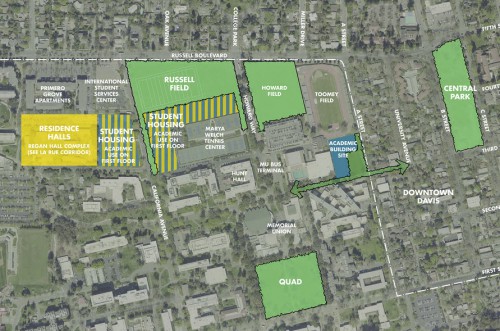 In Saturday’s column, I presented the full summary of the city’s response to the university’s Long Range Development Plan (LRDP).  For the most part, the city council subcommittee’s expressed position jibes well with the views the Vanguard has expressed over much of the last six months.

In terms of housing – the Vanguard has strongly agreed that UC Davis needs to provide more housing on campus than they have.  The city hits this point hard and unequivocally, saying, “Request UC Davis commit to more aggressive accommodation of on campus housing commensurate with anticipated growth and to balance community-wide housing needs.”

We need to remember, the city is not a party in this, it can only make requests.  However, there are some who believe that the city and community should focus all their energy on pushing UC Davis to provide more housing and that any housing provided in the city will let UC Davis off the hook.

Our view has always been a more balanced approach – UC Davis should build more housing, but the city should provide some housing in order to deal with current shortages.  The response puts forth this as well: “City to continue to pursue consideration of all infill and apartment housing proposals within the City (with emphasis on student oriented housing proposals within 2 miles of campus in order to facilitate ease of access).”

This has been somewhat controversial – perhaps surprisingly – but it seems like a solid moderate approach.

A few other strong points here.  First is the pushing for the university to maximize land efficiency and higher density, which goes along well with the commitment to preserve open space, conservation of ag land and a reduction of carbon footprint.

Another important point is to encourage the elimination of master leases of apartments by UC Davis within the city – these have been problematic because they reduce the city’s property tax take.

Finally, the council through this – if approved – would recognize “the community interests expressed in preserving the physical and cultural attributes of the Russell Fields as a key City/Campus edge and ‘shared community space,’ request that UC Davis withdraw the proposed conversion of field areas to housing from the LRDP and shift housing units to other areas of campus.”

The Vanguard strongly supports this – however, as a reader noted yesterday, the city council should go one step further and request that UC Davis refrain from putting housing or any buildings on the athletic fields.  That would seem an important addendum.

More controversial, I suspect, will be the statements on Nishi.  First, “City to revisit Nishi proposal with consideration of increasing housing option onsite.”  Second, “Request that UC Davis include evaluation of potential future bicycle/ped/transit/vehicle connection to the Nishi site in the LRDP and EIR.”

Nishi, of course, was defeated by the voters, narrowly, back in June.  From the city’s perspective, by requesting the campus connection to Nishi, that puts the decision making in the hands of the city and voters, rather than UC Davis.  Opponents of Nishi will likely cry foul at the former.

With Sierra Energy’s expansion plans at Area 52 and the investment by Fulcrum Property in University Research Park, it probably makes more sense now to focus Nishi on housing rather than R&D space (although we need more of the latter too).  The opponents of Nishi will object on the grounds of traffic as well as air quality.  The city should proactively study and address the latter issue.

The report hits on two key objectives with respect to commercial space, noting, “Increase availability of limited supply of commercial/R&D space within City for private companies,” and a reduction in the “impact of property tax base by UCD owned/leased space within City.”

Finally, on the circulation issue, the report makes reference to some of the key points that the Vanguard has raised with regards to Richards Boulevard.

The key item there is: “Evaluate options to route vehicle trips to and from campus away from Richards/Olive and to alternatives such as Old Davis Road and Hutchison. Partner with Caltrans to assess ideas such as reader board directory signs and real-time congestion monitoring and routing, including pricing access to downtown via Richards undercrossing of UPRR using dynamic pricing options.”

The report also requests “that UC Davis evaluate alternative connection configurations at Russell/Howard Way and Russell/California and Orchard Park/Russell Avenue for ‘right in/out only’ (except for transit).”

Along with that, the city and UC Davis should explore the potential of making the campus entrance at A Street and 1st Street for transit and bicycles only.  That would assist with routing vehicle trips away from the Richards Blvd. corridor.

Overall, there is a lot to like with this response, as it incorporates a number of themes the Vanguard has been pushing for several months.  We urge the council to go a little further on the items we have brought up with respect to the Russell fields (precluding buildings in addition to housing), Richards Blvd. (adding an A St./1st St. limitation), and finally pushing for the World Food Center at a university-city-private research park.

A lot of this will have broad community support, but there is likely to be pushback both on the infill apartment proposal and the Nishi one.