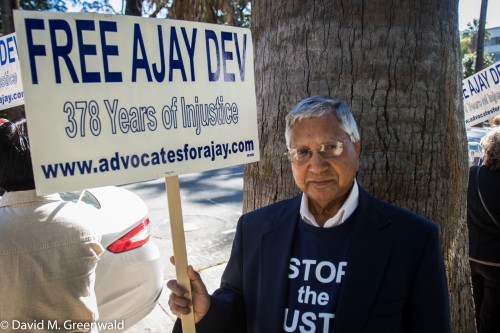 Earlier this month the 3rd District Appellate Court denied the appeal by Ajay Dev and his attorney for a new trial.  However, as we noted, in the oral hearing the ruling itself and Attorney General’s Brief misstated a number of facts that the defense is attempting to address through a Petition for Rehearing.

As we have noted a number of times, almost the entire case hinges on the translation of a recorded pretext call.  The jurors have told the defense, and even written on social media, that they found the testimony of the alleged victim (“AV”) in this case unconvincing, however the pretext call purports to show that Mr. Dev admitted to having sex with the alleged victim and that became the sole basis for conviction.

However, the key phrase in question, the defense believes, was misinterpreted.  The statement in question is translated from Nepalese to “because you have f–ed me after 18 years of your age.”  The prosecution has taken that to literally mean to have sex rather than the more generic version which would be “to screw over.”

This came out during the oral hearing when Michael Dolida, a Deputy Attorney General, argued, “When you have him saying ‘I f–ed her after she was 18’ … his whole defense falls apart.”

The defense points as evidence to this misinterpretation that the alleged victim’s response was, “ok so?”  By omitting the “ok so” and instead adjoining “that means you have given me consent” creates a complete misrepresentation of the entire conversation, as though to suggest that Mr. Dev made one uninterrupted comment.

Indeed, later in the conversation, the alleged victim clearly did not seem to believe this was an admission.  She later asked him, “Because I want you to talk to me.  I want you to say it.”

The appellate court would write: “In addition to the victim’s testimony regarding the sexual offenses, there is evidence of a recorded phone conversation between the victim and defendant in which defendant made statements that he deserved to be put in prison, that he threatened to kill the victim and himself, that the victim’s life would be ruined because she had sex with defendant after she turned 18 and thus had consented, that they met together at a motel, and that nothing would happen because the victim had no proof.”

But much of this represents a misstatement of the facts, or taking the facts out of context.

For instance, the court writes, “Defendant did not deny (AV’s) accusations that he fathered the babies she aborted.”

This is inaccurate.  Mr. Dev expressly denied these allegations on repeated occasions.

The alleged victim starts with the allegation that she went to her school counselor and admitted to having three abortions, but refused to tell the counselor who the father was.  She said, “I did not really tell her anything about us….  Should I tell her, about you and me daddy?”

But, in contrast to the opinion, he stated, “it’s wrongly accused.”

She responds, “How is that wrongly accused?  Didn’t you do that to me, when.”

AD:         You are lying. This is the worst possible accusation I could possibly have.

The opinion states that defense expert Shakti Aryal translated a portion of the pretext call as Ajay stating:  “But you kissed me when you were 18.”  While accurate, this is not what the defense expert testified to at trial.  Here he not only ruled out the possibility that the AV’s translation was correct, but testified that the start of the word in dispute starts with a “K” or a hard “Ca” sound.

Given that, he suggested that the word may have been the English word “kissed” rather than Nepali.  However, he did not hear the word “kissed” and, given that the rest of the sentence was in Nepali, not English, this translation is questionable.

The court states, “(AV) testified that defendant raped her again after she moved out of the Dev home.  According to (AV), defendant asked (AV) to meet him so they could talk, but he took her to a Motel 6 and raped her.  Motel 6 records showed defendant checked into the motel on December 10, 2003, and on January 2004.  (AV) said the Motel 6 incident was the last time defendant had sex with her.”

However, the jury did not convict on the Motel 6 rape allegation.  Instead, what happened is that Mr. Dev and his adopted daughter negotiated concrete terms to continue their familial ties.  This fact is corroborated by the contract signed by Mr. Dev and his wife with the alleged victim to ensure her success as a respectful member of the family who would continue her studies and live independently with continued, but renegotiated, financial assistance from the Devs.

The court also repeats the allegation that Mr. Dev showed the girl pornography, stating that he “also showed her pornography from the time she was 15 until she was 18 or 19.  Defendant showed (AV)  five to six pornographic movies on his Dell laptop and on a Dell desktop computer.  All of the movies featured extremely young looking girls.”

However, as we have noted before, the jury acquitted Ajay of these very specific charges in Counts 64 and 65.

These are just a few points that are raised.  Ultimately, this case will go the habeas route to consider the fairness of the trial.  As we saw in a previous analysis, the court ultimately punted on a number of issues that they argued had not been raised in trial court and therefore were forfeited in the appellate court.