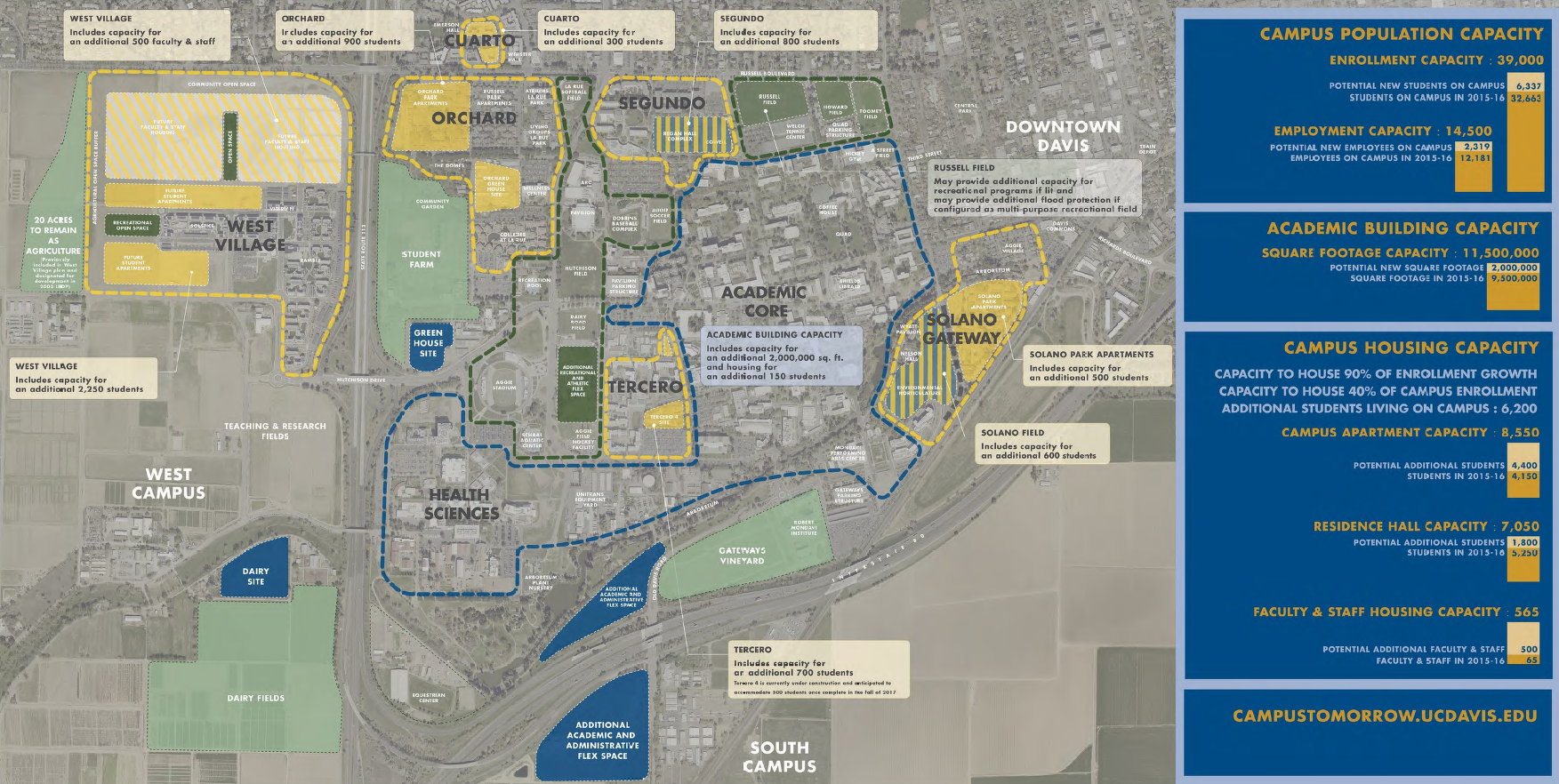 Last Thursday, ASUCD Senate voted unanimously to pass SR #7, a resolution to serve as a comment letter on the LRDP EIR process, which asks that a “50/100” equal weight alternative plan be included in the EIR. “We have worked with City Council and Mike Webb, Assistant City Manager, to develop this resolution, and plan to work with the city as is necessary in the weeks to come,” a release from Sara Williams, ASUCD External Affairs Commission Chair stated.

An ASUCD Senate Resolution to submit comments on the Notice of Preparation for the UC Davis Long Range Development Plan, specifically suggesting that housing 100% of enrollment growth and 50% of the total student population on-campus be included as an equal weight alternative in the Environmental Impact Report.

WHEREAS, the Long Range Development Plan (LRDP) serves as a comprehensive policy and land use plan that identifies potential campus population growth and examines the physical changes and possible repercussions of such changes required to accommodate these growth projections; and,

WHEREAS, the “scoping” period required by the California Environmental Quality Act (CEQA) was initiated by the university on January 4, 2017 upon the release of a Notice of Preparation (NOP); and,

WHEREAS, this “scoping” period serves as an opportunity to gather responses to the LRDP which identify significant environmental issues, reasonable alternatives, and mitigation measures that should be explored in the Environmental Impact Report (EIR); and,

WHEREAS, an EIR is a disclosure document that allows project stakeholders to examine the realities and repercussions of said plan, thereby serving as a tool to help mitigate potential impacts for relevant project decision makers; and,

WHEREAS, students have a direct and vested interest in the policies outlined in the LRDP, and therefore the concerns of students should be expressed and examined during the “scoping” process; and,

WHEREAS, housing quality, affordability, and availability is of utmost concern to current and future UC Davis students, as the apartment vacancy rate in Davis is currently 0.2%; and,

WHEREAS, the current LRDP would provide housing for 90% of the projected enrollment of all new incoming students and 40% of the total UC Davis student population; and,

WHEREAS, the City of Davis believes that such a plan would force students and staff to live in surrounding communities outside of Davis, thus increasing the potential for significant air quality impacts and greenhouse gas emissions; and,

WHEREAS, the City of Davis believes “the potential for urban decay from the crowding and/or deterioration of housing units in the City, as a result of a lack of on-campus housing”; and,

WHEREAS, Davis City Council has suggested that UC Davis analyze an equal weight “50/100” housing plan in the EIR in which 100% of the projected enrollment of all new incoming students and 50% of the total student population could be housed on campus.

THEREFORE LET IT BE RESOLVED THAT, the Associated Students, University of California, Davis (ASUCD) agrees with the direct and indirect impacts the current housing projections included in the LRDP will have on the Davis community as outlined by Davis City Council, including increased emissions from commuting, urban decay and crowding, and displacement of students, staff, and Davis residents; and,

THEREFORE LET IT BE FURTHER RESOLVED THAT, the ASUCD believes both the City of Davis and UC Davis should plan and/or prioritize projects that provide affordable housing options to students, staff, and community members in order to combat this housing crisis and its current and future repercussions; and,

THEREFORE LET IT BE FURTHER RESOLVED THAT, the ASUCD joins with Davis City Council in strongly suggesting UC Davis include an equal weight “50/100” housing plan in the EIR; and,