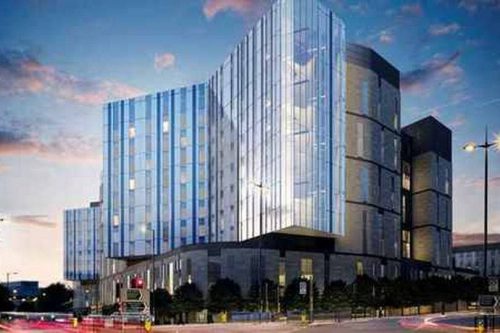 On Sunday 1/29/17, renowned local gynecologist Tia Will announced the grand opening of a new hospital in Davis, California. Dr. Will stated that she was inspired by recent events in Washington to build this great new hospital which she expects will be a fabulous addition to the community of Davis.

Dr. Will explained that the new hospital, of which she will be the Chief Medical Officer, will be beautiful. It will include a major regional trauma center including life flight, a cancer center, be a hub for complicated neurosurgical procedures with associated rehabilitation center, and closest to her heart, a full Women’s and Children’s hospital with a high risk Labor and Delivery service and intensive care units.

After a marvelous ribbon cutting ceremony attended by the mayor and mayor pro tem of Davis, county supervisors and a host of other elected officials, Dr. Will took questions from the press.

When asked by reporters about her inspiration to build the hospital, Dr. Will pointed to the current president’s clear signals that bigger is better and that we need to improve our infrastructure and provide huge numbers of new jobs. Dr. Will responded curtly to a second question about her qualifications to head such a facility stating that, although she had never built, staffed, or operated a hospital before, she is a very smart person who will surround herself with all the best advisors. Besides, she stated, I have had two children and been hospitalized myself three times and thus have all the experience that I will need. One of her children, who has been designated as a senior advisor, added that Dr. Will “is a woman of action so the press should just get used to it.”

A final question from the reporter from the Davis Enterprise inquiring about why Dr. Will was making this announcement in front of an empty field, having just cut a small length of ribbon held by her children, was deflected by David Greenwald of the Davis Vanguard. Mr. Greenwald explained to the Enterprise reporter, “Dr. Will is a known believer in alternative truths, has been greatly inspired by Kellyanne Conway…. and besides, we find it best not to contradict Dr. Will while she is holding a scalpel.”