Once again if the perpetrator of an attack on the Davis Islamic Center was hoping to sow fear and division in the community, the community response by an extremely diverse group of people on Friday showed them otherwise.

The event on Friday afternoon, organized by Kate Mellon-Anibaba with support from the Davis Phoenix Coalition, drew hundreds of people, and included a diverse group of speakers including Muslim community and regional leaders, city and county officials, and two rabbis.

Ms. Mellon-Anibaba told the crowd, “I wanted to show marginalized groups that they have strong allies that support them.

“Many have said, this is not our town,” she said.  “The reality is this is not the first time that this has happened.  And unfortunately it may not be the last.”

She said it would be more accurate to say that this is not what we want our town to be.  “In this community, diversity is celebrated, black lives matter, women’s rights are human rights, immigrants and refugees are welcome, disabilities are respected, water is life, love is love, and Islam is peace.”

Davis Islamic Center’s Imam Ammar Shahin said, “It’s very hard to speak now when you see all of this support from the community.”  He said the love and support “was expected from Davis.”  He said, “This is a very clear message that we have to feel like we’re always together.  If we stand as a group, then most likely all this will stop.”

Hamza El-Nakhal a resident of Davis since 1969, said he has already forgiven the perpetrator.  He said that “if we ever get to catch this woman, we just want to talk to her.  I really have forgiven her in my heart.  After you see all this love, in fact, I’m grateful to her.”

“In my heart I’m completely at peace, I already have forgiven her,” he said.  “I just want to talk to her.   I don’t know what she feels in her heart, definitely she feels something not good.”

The Internal Vice President of the Muslim Student Association, Nida Ahmed, said, “I’m not going to lie, these past days have been really difficult.”  She said she and her team had been raising money to build wells for Flint, Michigan, when the next day, “we woke up to the news that our beloved place of worship, our mosque, had been vandalized.  I remember hearing the news and my heart dropping.

“I’m still trying to process everything,” she said.  But the reaction has been amazing she said, with flowers and love.  “It was with a sense of gratitude, because this is the Davis that I love and have seen throughout my years here.

“Being visibly Muslim for the last year has not been easy,” she explained.  “The rhetoric that has been going around in the media about Muslims has been difficult to cope with.”  But the response “gives me so much hope.”  This will get us through it all, “because together we rise,” she said.

“Davis for me as a Muslim woman has been a safe and accepting place,” a professor from San Francisco State who lived in Davis for years stated.  “Sadly even while there is great love here, at the night of one our nation’s largest acts of unity and protest, the Women’s March, someone harmed our community.  They committed an act of hate, targeting the Islamic Center, in other words, the Muslim house of worship.

“There are a couple of things that the perpetrator of this act of hatred did not know,” she said.  “She did not know that Islam is a religion of peace.  Most importantly, they did not know that for Muslims, the entire earth has been made a place for prayer.”

She said, “You can try to destroy our house of worship, but God lives in the hearts of people and no one can tear down our hearts.”

Mayor Robb Davis was overwhelmed with emotion, explaining to the crowd that when he got the news on Sunday, he had “an overwhelming feeling of shame.”  He said, “Shame, it’s probably a word that doesn’t make you feel comfortable.” 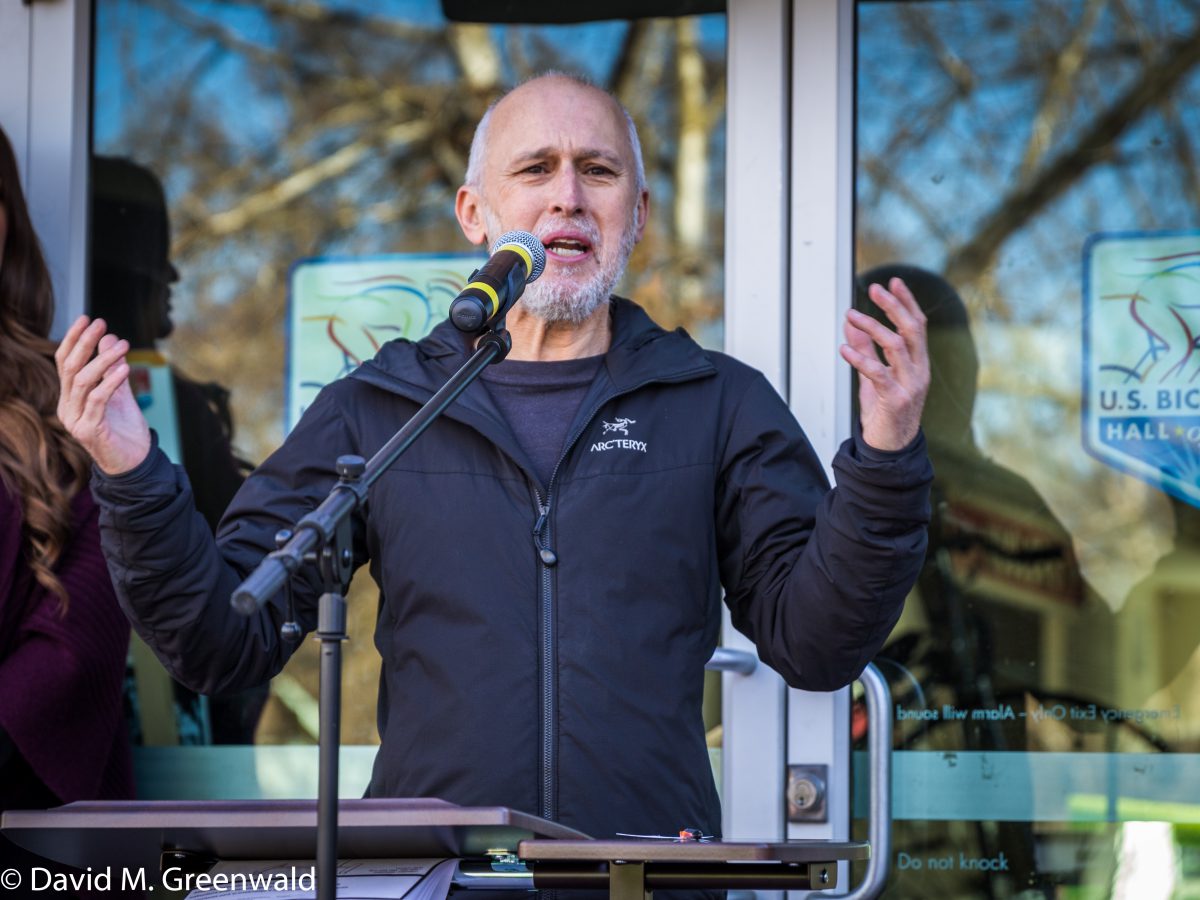 He said, “Maybe what I’m talking about is a collective sense of shame.  It wasn’t abstract for me.  It was how can I face my brother Hamza…  It was a sense of collective shame for this community.”

He said that people can respond that this was an act of an individual, a person filled with hate, a person “who has some problems.”  He asked, “Why a sense of collective shame?  A response like that, it’s the act of an individual, that’s a culturally appropriate response.  We believe that – it’s a very American response.  I sometimes wonder, if that response, appropriate culturally as it is, isn’t at the root of the wilderness march at which we find ourselves today. 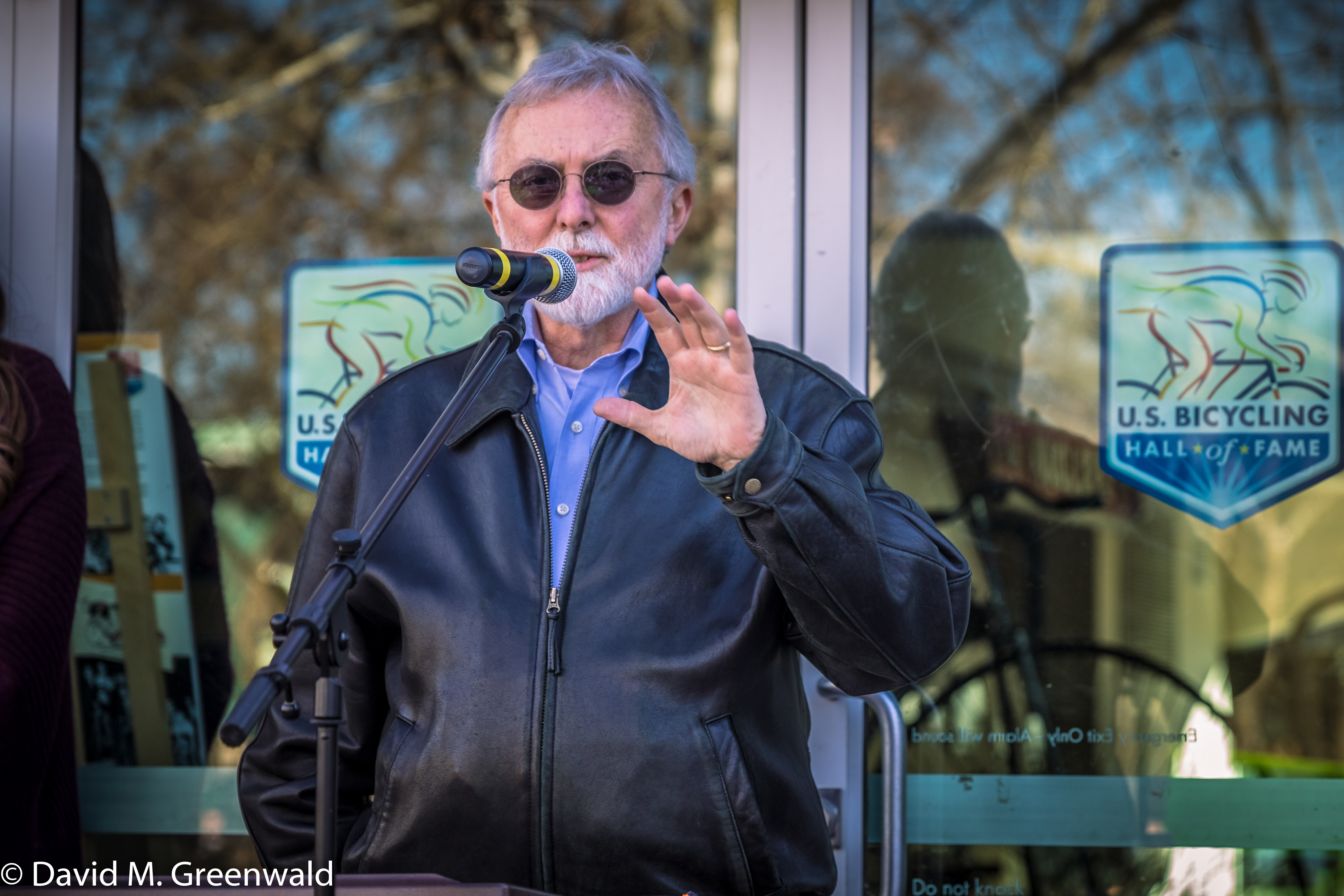 Yolo County Supervisor Don Saylor said, “This is the biggest crowd from this vantage point.  I have never seen a crowd this big.”  He quipped that “there are five million people.  I can see the Lincoln Memorial from this place.”

He described the attack as a “very stepped, deliberate action.”  He said, “They know not what they do.”  He said, “[T]hen the most gross insult they could come up with, in their twisted mind, and I’m not yet at the spiritual place that Hamza is, I’m sorry, the most gross insult that they could come up with, they left bacon, they left bacon.”

Basim Elkarra, the head of the Sacramento chapter of CAIR (Council on American-Islamic Relations) said, “Davis and Islamic Center of Davis, you are not alone.”  He said they had a press conference with all sorts of elected and religious leaders across the spectrum to stand up against the wall and the Muslim ban.

“We actually thought that the wall and the Muslim ban would come on the same day, but Donald Trump wanted to terrorize Muslims and Latinos on separate days and he’s keeping us in suspense.”  He said, “It’s not about the Muslim ban, it’s not about the Islamic Center of Davis or our community, this is about a struggle that the 1964 Civil Rights Act did not finish.  Because hate was swept under the rug, today in 2017, we have an historical opportunity to address what happened in the past and fix what happened in the past.”

Hate, he said, has popped “its ugly head” and is “threatening… every community.”  He said, “All of us working together, we have to fight for the soul of this nation.”

Photos from the event… 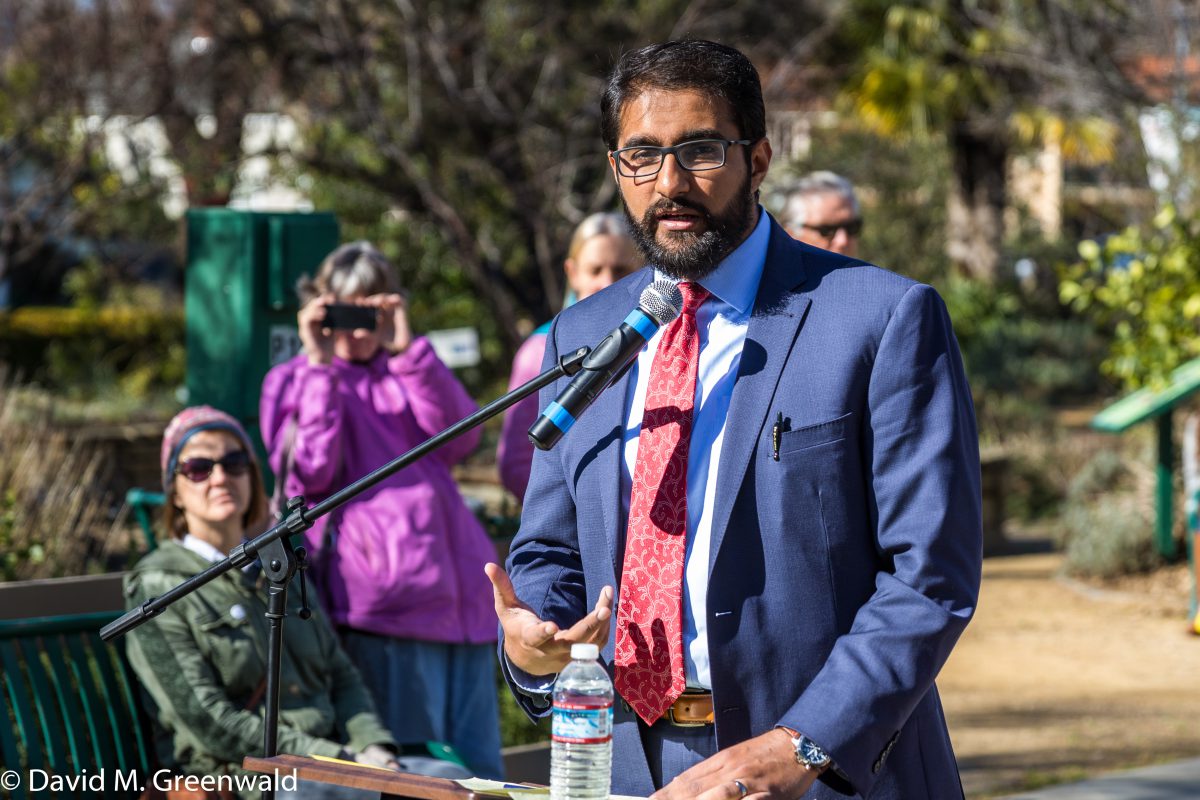 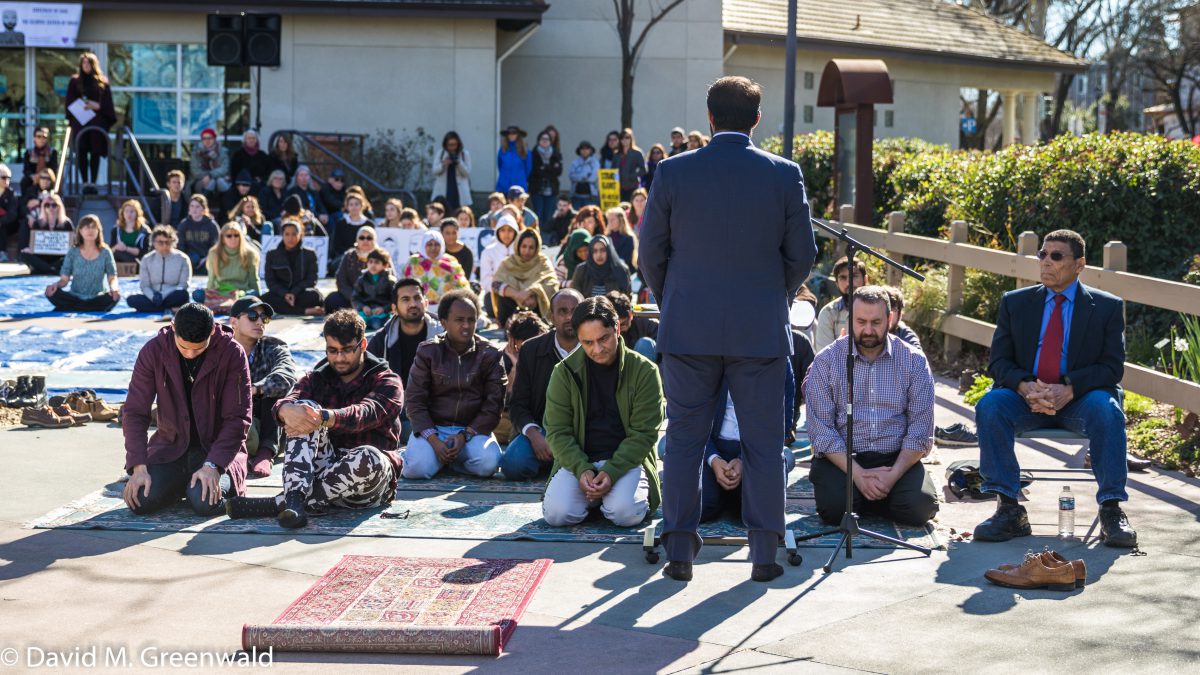 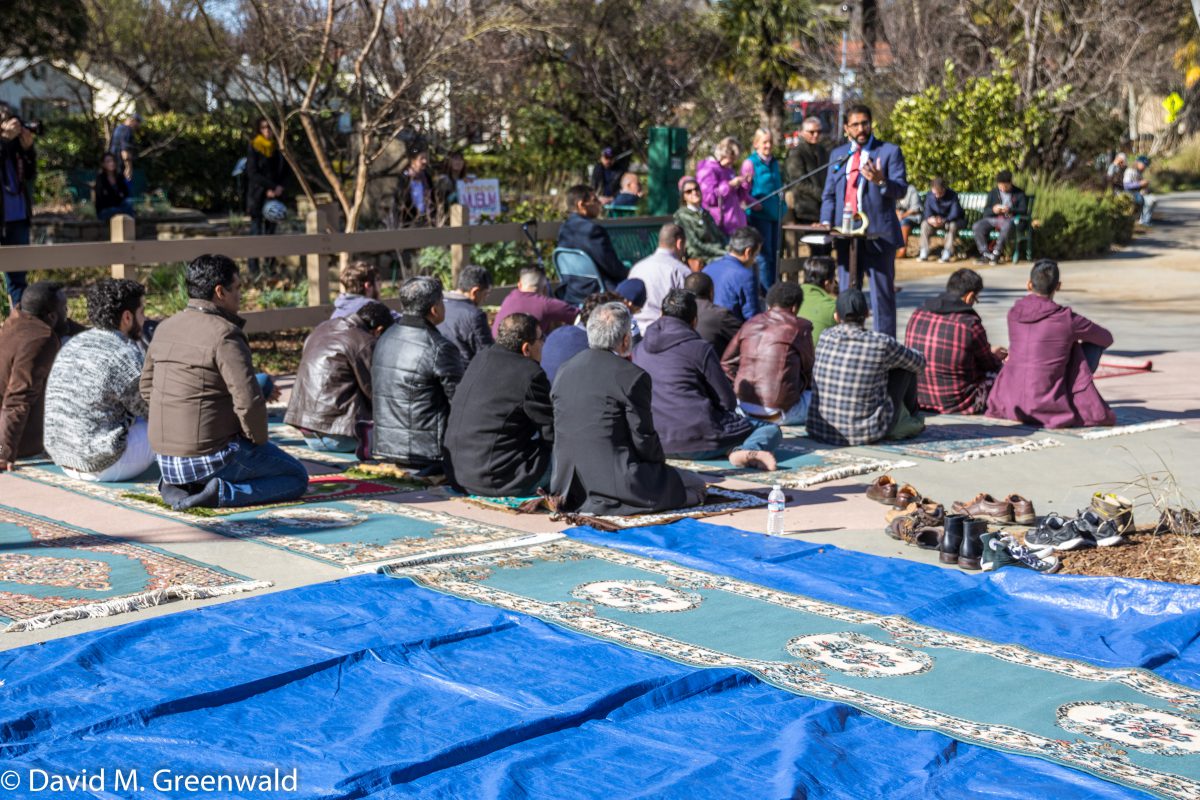 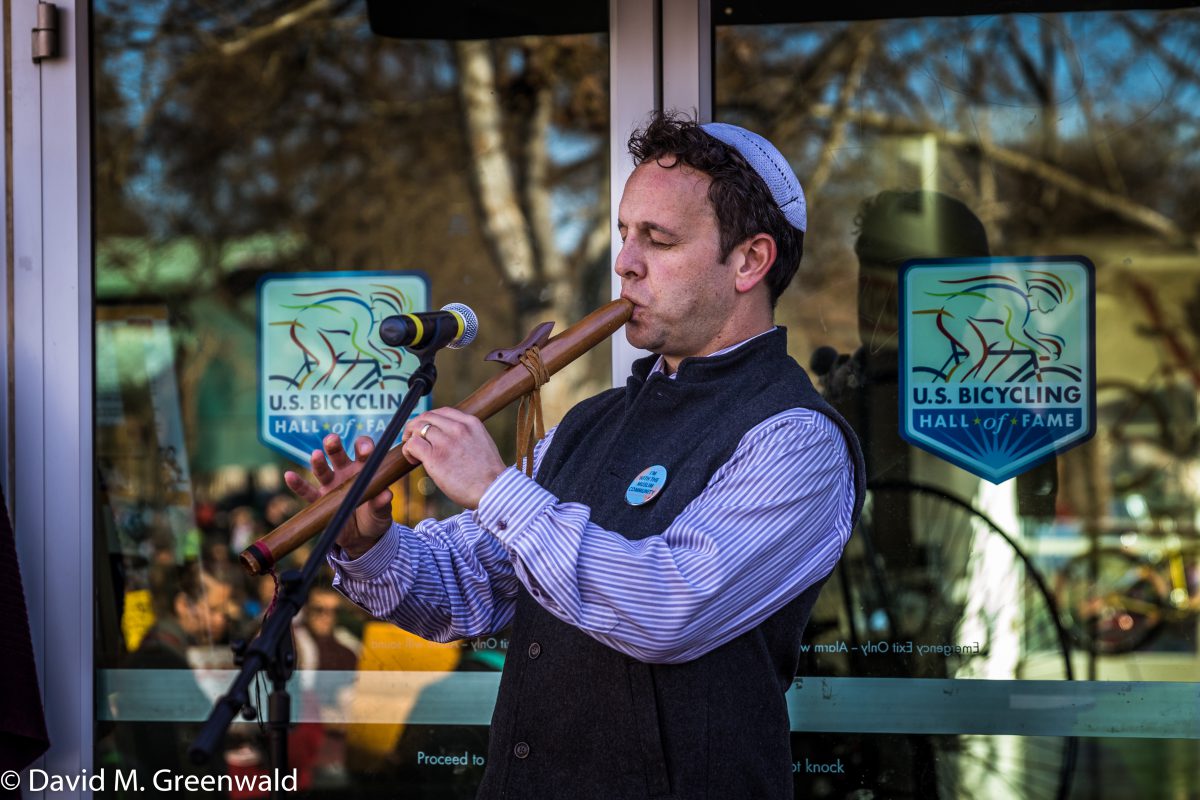 Various shots of the signs in the crowd 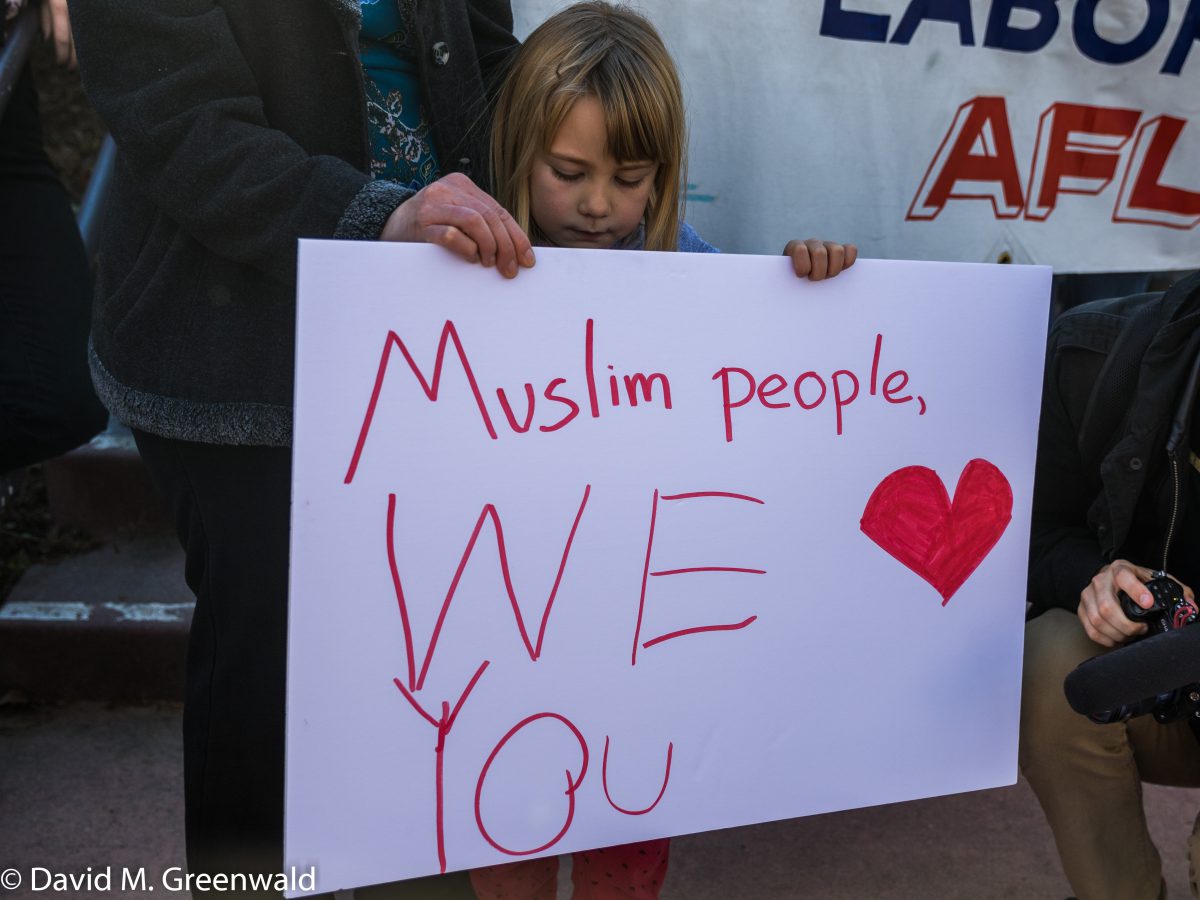 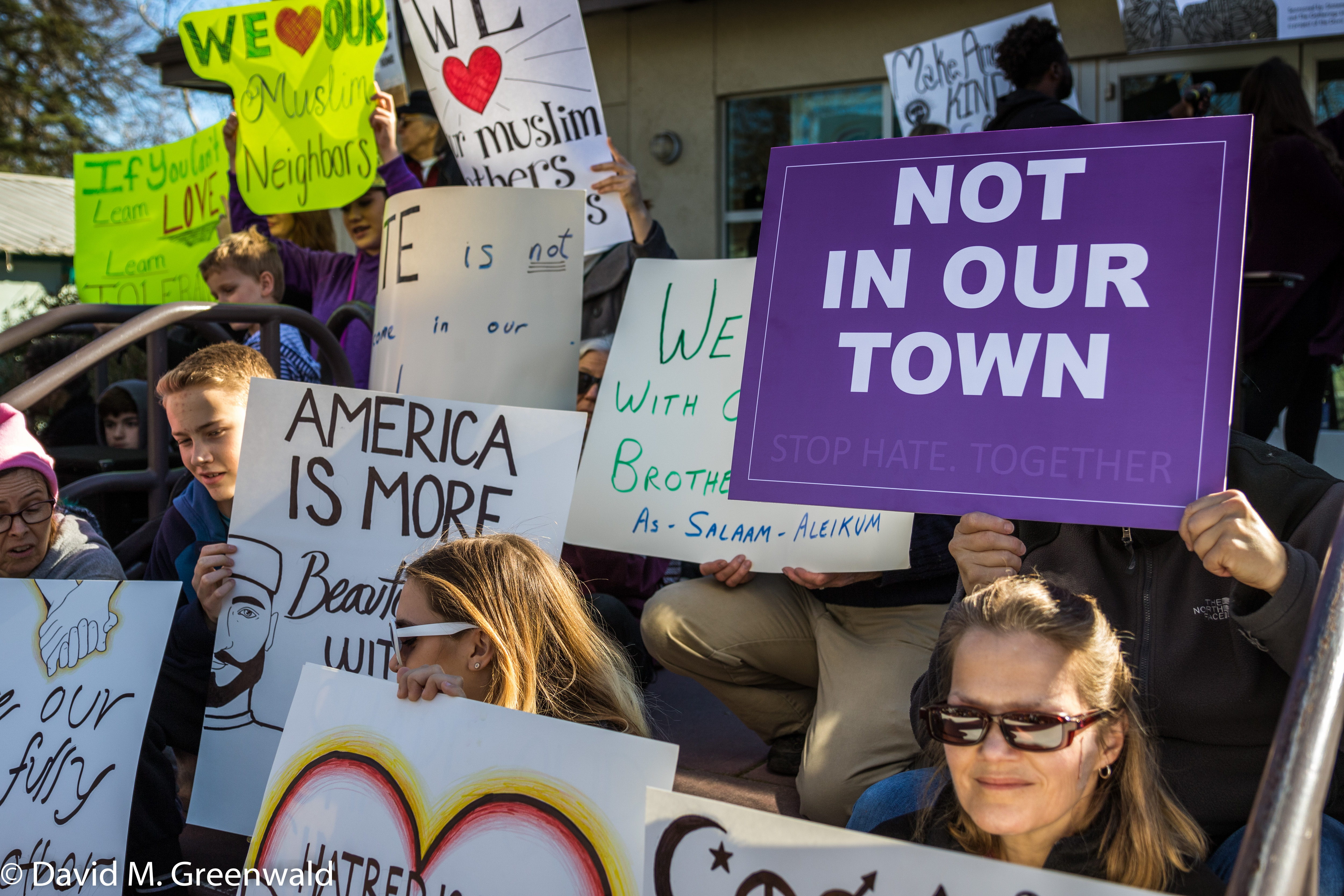 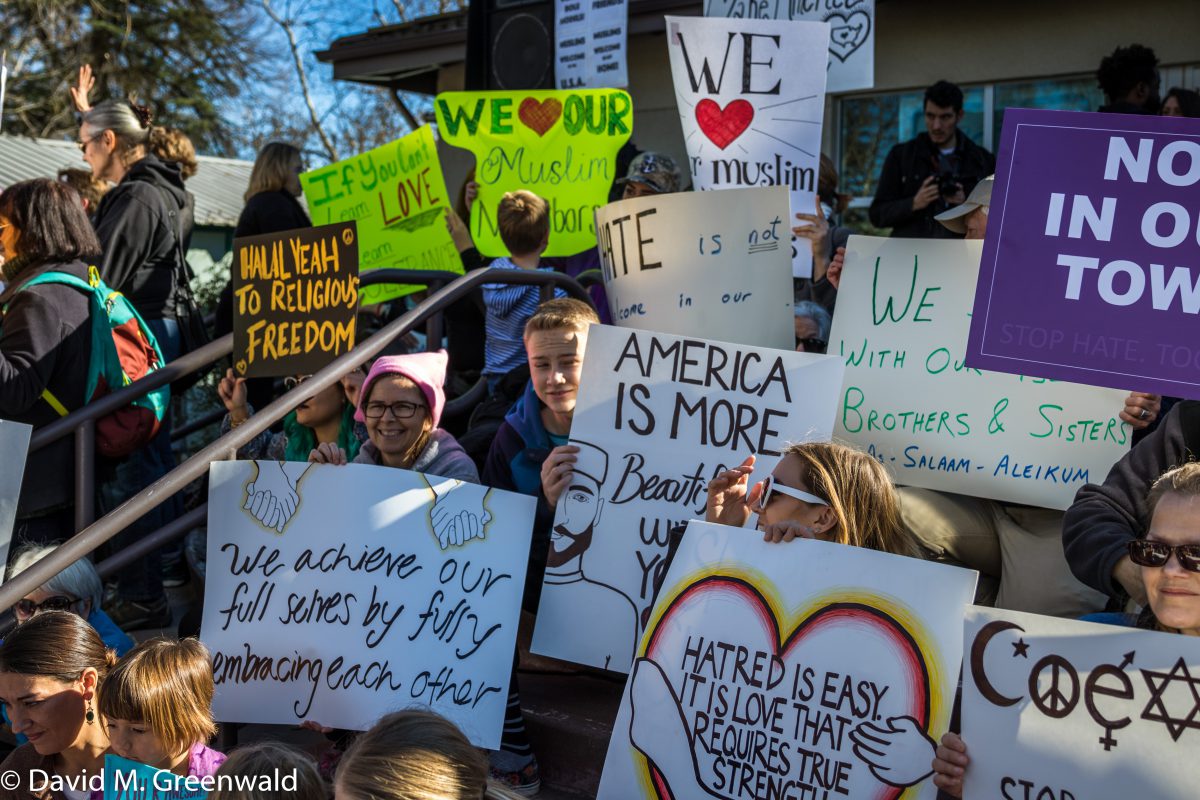 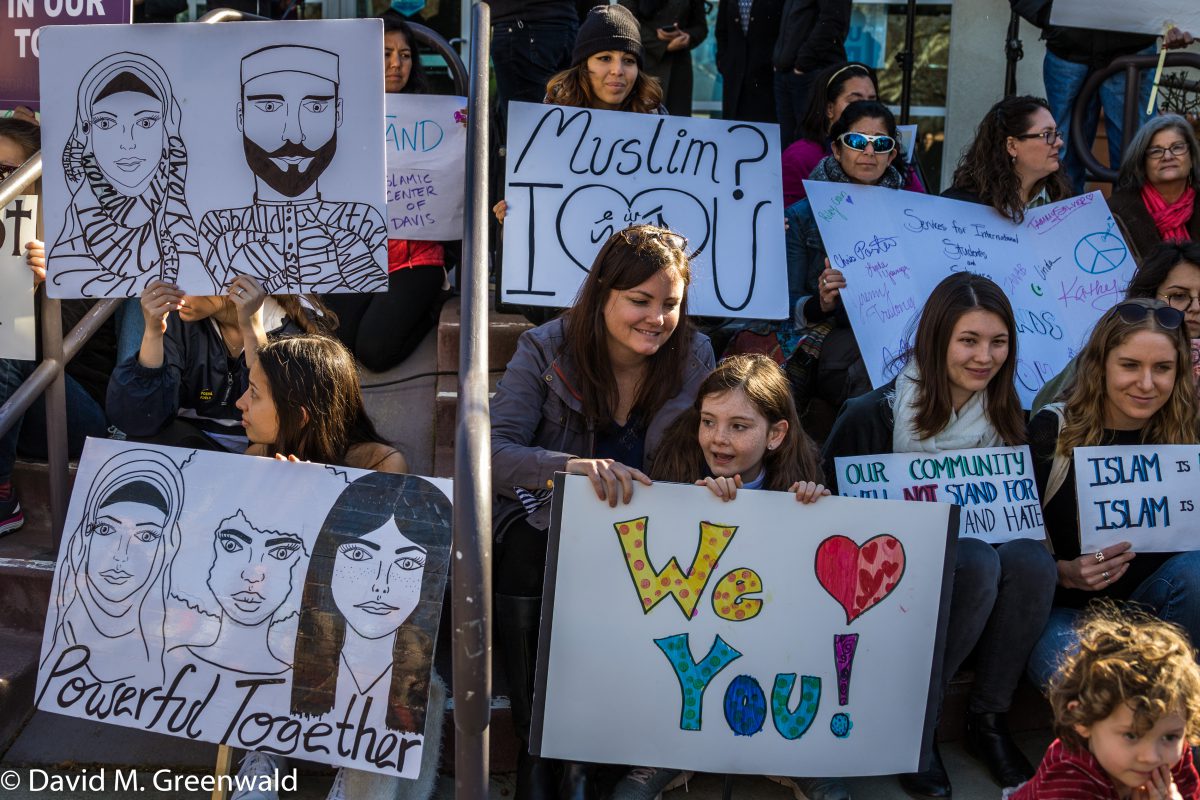 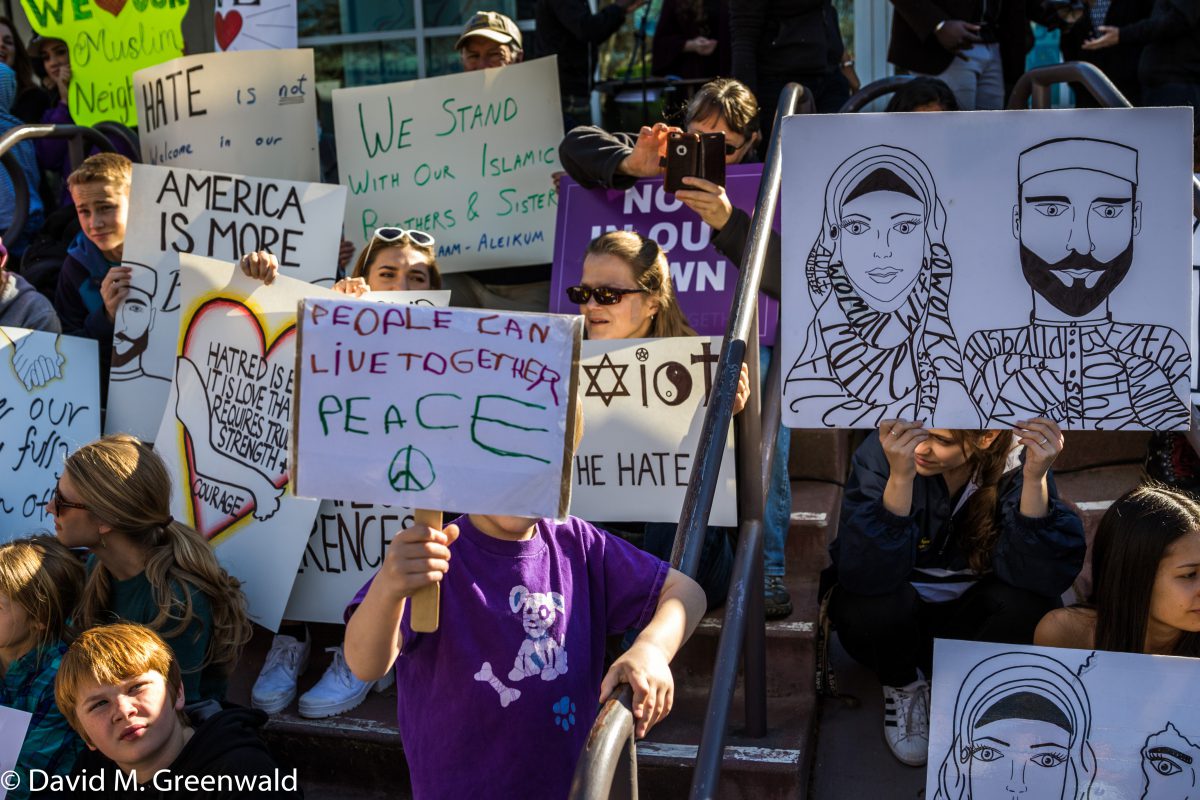 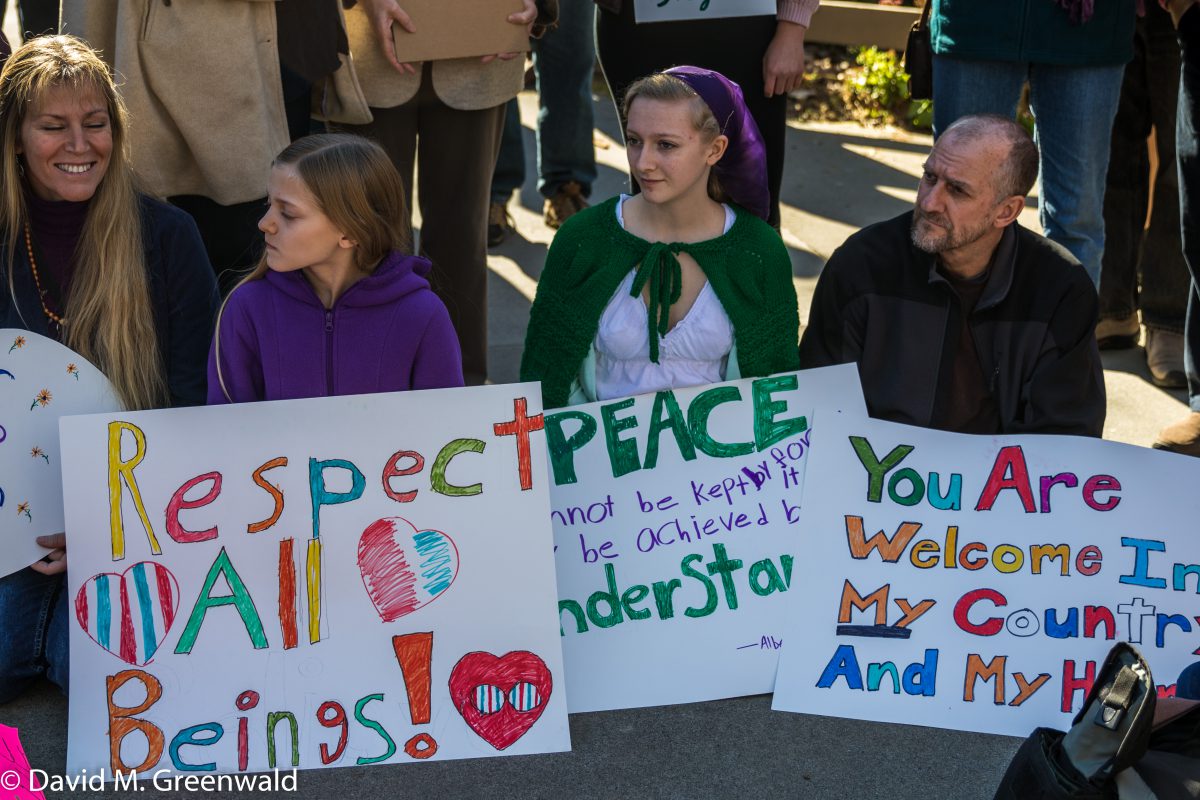 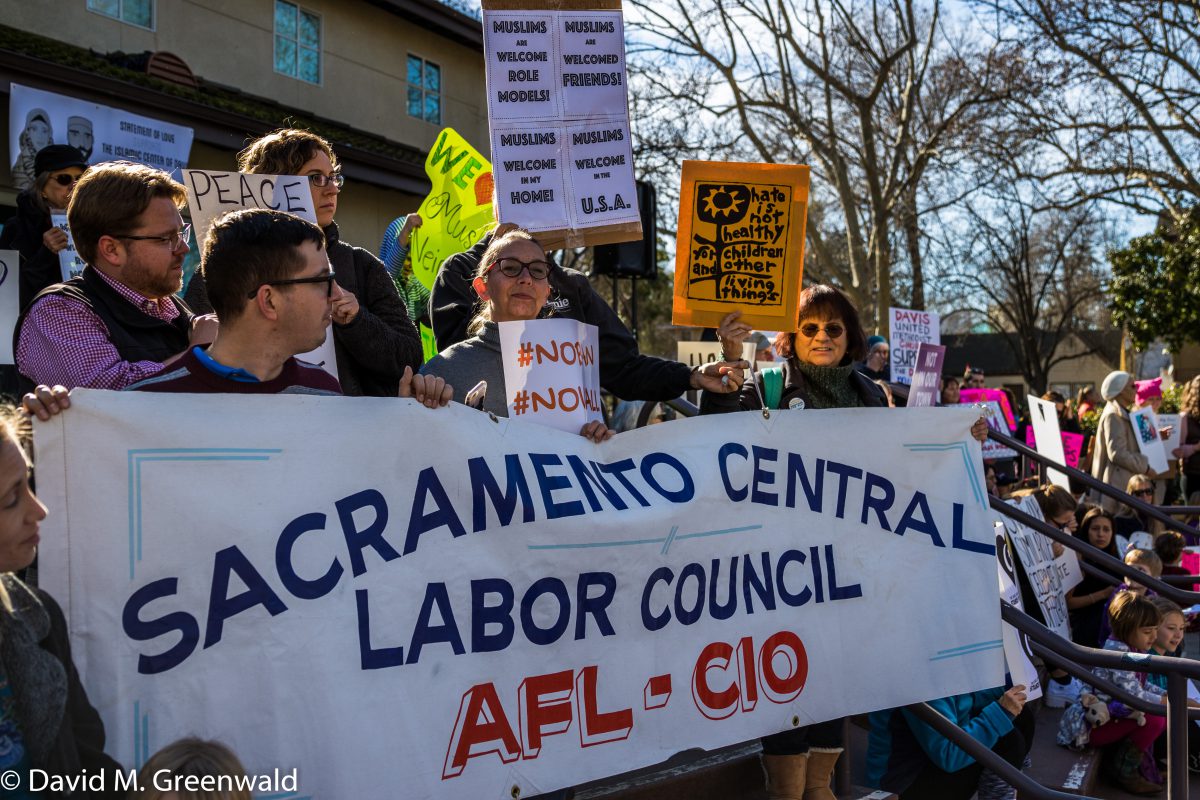