After several months of discussions about the Hyatt House, the council will finally consider approval of the extended stay hotel proposed for 2750 Cowell Blvd, with 120 guest rooms and a four-story structure, which after negotiations with neighbors will be reduced to 118 rooms and three and a half stories, with the elimination of the fourth story facing the neighbors.

At the last public meeting on November 1, 2016, the council directed a city-sponsored professionally facilitated conversation between the project applicant and neighborhood representatives. The meeting was held on November 29 and facilitated by Orit Kalman.  According to the staff report, “The meeting consisted of identifying issues and concerns from the perspectives of the neighborhood and the development team.”

While there was some headway in that meeting, issues of lighting, noise, parking and size remained.  A second meeting occurred on January 10.

Staff reports, “Progress was made on a number of items by jointly agreeing to project modifications and developing conditions of approval to deal with the concerns surrounding noise, parking and lighting which will be elaborated on later in the staff report.”

At this point two issues remained: size of the building and a contribution to support local neighborhood improvements.

At the January 10 meeting, “the development team presented a redesigned building that eliminated all fourth floor rooms that faced south towards the neighborhood by incorporating a single-loaded corridor at the rear of the fourth floor with the remaining guest rooms facing north with views towards Cowell Boulevard.”

While the redesign significantly reduces the massing on the rear and reduces the overall room count to 118 rooms, “[t]he neighborhood representatives expressed appreciation for the development team’s efforts but also voiced disappointment that the entire building was not reduced to three stories.”

On the second issue, “After reviewing the redesigned building, the neighborhood representatives requested the applicant consider if there is anything that could be done to help address neighborhood concerns regarding a potential change to their quality of life and property value by making a contribution to targeted park and greenbelt enhancements within the Rose Creek neighborhood.” 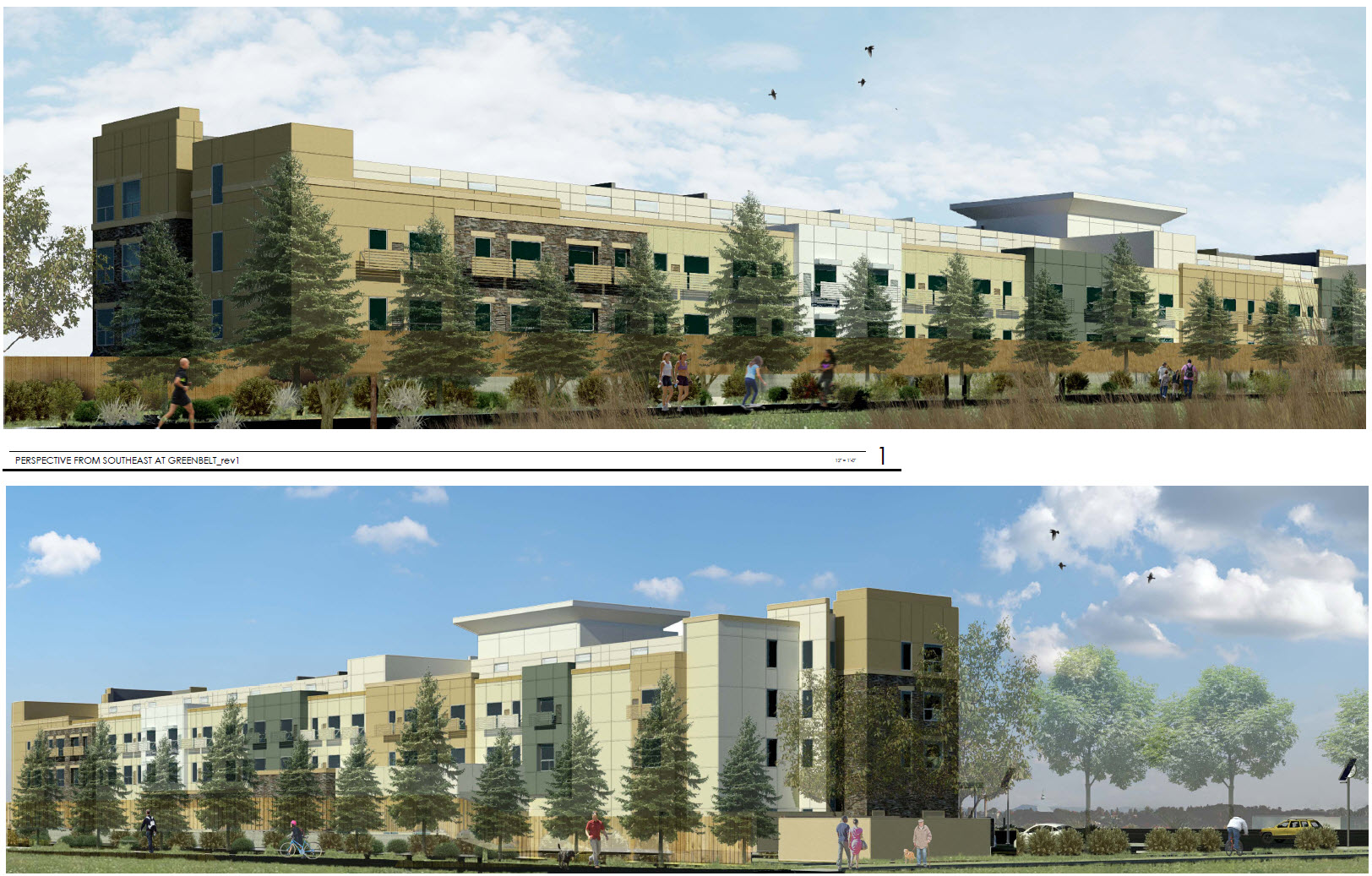 The applicant has created a proposed Rose Creek Neighborhood Park and Greenbelt Enhancement Fund. The fund contributions would be calculated based upon a formula of $1.00 per night for each guest room sold. The fund would be administered by Parks and Community Services.

The neighbors “desire a one-time contribution to redesign and reconstruct a greenbelt mini park at the end of Brentwood Place and to utilize any remaining contributions at Village Park.” The neighborhood also “desires the funding commitment to be binding and either be made by the City through the use of fees generated from the project or if that is not possible, by the applicant directly.”

In addition to the one-time contribution, ”the neighborhood desires the Rose Creek Neighborhood Greenbelt and Park Enhancement Fund proposed by the applicant be increased from $1.00 per night, to $2.00-$3.00 per night and have the term continue as long as there is a hotel operating in the project location.”

Staff writes, “In reviewing the requests associated with the park improvements, staff concurs that the playgrounds referenced are nearing completion of their useful life and staff supports playground replacement, pending identification of funds through the budget process.”

Staff notes the new design: “The building height facing the neighborhood to the south is reduced to three stories and 37 feet. The northern portion, facing Cowell Boulevard, would remain at four stories and 48 feet (and a higher tower element). Room count would be reduced from 120 to 118 guestrooms. The fourth floor hallway facing south would have clerestory windows and motion controlled, bi-level lighting, with a condition of approval (COA# 66) that reduces or eliminates the exterior view of corridor lighting.

“The screening for the south-facing windows proposed earlier would be added to the second story guestrooms, as well as the third-floor rooms.

“The building redesign allows for the previously ground mounted photovoltaics to be relocated to the roof on the third story increasing optimal efficiency addressing previous concerns voiced during public comment.”

Staff adds, “In addition to reducing potential noise by limiting the parking in this area to employees, it also ensures that there is parking available to employees which helps address a concern about offsite employee parking.

“While this requirement reduces guest parking flexibility, neither the applicant nor staff is concerned with the adequacy of guest parking given the proposed transportation program that would be provided by the hotel coupled with the increasingly car free travel patterns of business travelers,” staff continues.

The existing bike path connection from the greenbelt to Cowell will be located to the western edge, which staff believes “would reduce the likelihood of hotel guests or employees parking on Albany, as well as provide greater convenience to hotel guests with UC Davis or downtown destinations.”

Finally, the city staff report notes, “To address concerns with privacy and building screening, the property owner would revamp and maintain the greenbelt plantings adjacent to the property as long as a hotel or building of similar mass remained on the site (COA#111). This would be enforced through a covenant recorded on title to the property.”

The question is – the applicant and city have made a concerted effort to address neighborhood concerns about noise and privacy.  They clearly do not go as far as the neighbors wanted by reducing the project to three stories, but they have gone a long way towards addressing neighbor concerns.  Will this be enough to get neighborhood support or at least non-opposition?  Or will the neighbors continue to oppose the project at the meeting on Tuesday?

Share:
Tags:HotelsHyatt Houseland use
Previous : Paging Bernie Sanders: New Mini-dorm Law & Protecting the Davis Middle Class
Next : My View: Do We Have a Great and Vibrant Downtown?

79 thoughts on “Is Hyatt House Ready to Go Forward?”