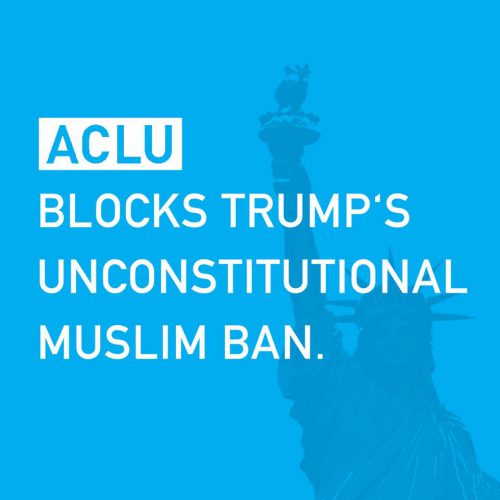 This is a remarkable day. When Donald Trump was elected president, we promised that if he tried to implement his unconstitutional and un-American policies that we would take him to court. We did that today. And we won.

Yesterday President Trump signed an executive order that suspended resettlement of Syrian refugees indefinitely, suspended all other refugee resettlement for 120 days, and banned the entry of nationals from Iraq, Syria, Iran, Sudan, Libya, Somalia, and Yemen for 90 days. All seven countries are predominately Muslim countries. We have no doubt that the motivation behind the executive order was discriminatory. This was a Muslim ban wrapped in a paper-thin national security rationale.

The executive order went into effect immediately and so did its destructive intent. At John F. Kennedy International Airport last night, Hameed Khalid Darweesh arrived and was immediately detained. Darweesh worked as interpreter for the Army’s 101st Airborne Division and, according to Brandon Friedman, a platoon leader in Iraq, saved countless U.S. service members’ lives. We don’t know how many other refugees and foreign nationals with green cards or visas might have been detained when they tried to make their way into the United States today, but we intend to find out. We are asking anyone with any information to get in touch with the ACLU.

The ACLU with other organizations immediately sprang into action and challenged Trump’s executive order in court as violating the Due Process and Equal Protection Clauses of the U.S. Constitution. We immediately got a hearing and argued our case. At around 9 p.m., Federal District Court Judge Ann M. Donnelly issued a stay, blocking President Trump’s discriminatory policy from taking effect and preventing refugees and immigrants from being deported. She did not rule on the constitutionality of the order, but for now, the men and women who would have been deported are safe. When I and staff attorney Lee Gelernt emerged from the courthouse, we were met with a sea of people cheering and chanting.

I cannot express how humbling and inspiring this moment is.

The United States is a nation governed by the rule of law and not the iron will of one man. President Trump now has learned that we are democratic republic where the powers of government are not dictatorial. They are limited. The courts are the bulwark of our democracy that protects individual rights and guards against the overreaching of an administration that confuses its will for the American public’s.

Tonight was one of the most incredible experiences of my life, one that demonstrates that the people united will never be divided. This is only the beginning. This is merely the first skirmish in a long battle to vigorously defend the Bill of Rights from the authoritarian designs of the Trump administration.

Anthony Romero is the Executive Director of the ACLU

A federal judge granted the American Civil Liberties Union’s request for a nationwide temporary injunction that will block the deportation of all people stranded in U.S. airports under President Trump’s new Muslim ban.

The ACLU, along with several groups, filed a lawsuit this morning on behalf of two Iraqi men who were en route to the United States on immigrant visas when President Trump issued an executive order banning many Muslims from entering the country.

One of the men, Hameed Khalid Darweesh, was traveling on an Iraqi special Immigrant Visa and had worked as an electrical engineer and contractor for the U.S. government from 2003–2010. Brandon Friedman, a former Obama administration official who commanded a platoon during the invasion of Iraq, said Mr. Darweesh had worked for him as an interpreter. He said on Twitter yesterday that Mr. Darweesh “spent years keeping U.S. soldiers alive in combat in Iraq.”

The other, Haider Sameer Abdulkhaleq Alshawi, had been granted a Follow to Join Visa. His wife and 7-year-old son are lawful permanent residents residing in Houston, Texas, and were eagerly awaiting his arrival. Mr. Alshawi’s son has not seen his father for three years.

Immigration officials at John F. Kenndy Airport said there was no other reason than President Trump’s executive order to detain the men.

Why Trump’s Executive Order on Refugees Violates the Establishment Clause

According to the Supreme Court, “the clearest command of the Establishment Clause is that one religious denomination cannot be officially preferred over another.” But that command is apparently not clear enough for President Donald Trump.  On Friday he signed an executive order on refugees that imposes a selective ban on immigration from seven Muslim-majority countries as well as establishes preferential treatment for refugees seeking asylum who are identified with “minority religions” in their country of origin. In case there was any doubt about the latter provision’s intent, Trump told Christian Broadcast News that it was intended to give priority to “Christians” seeking asylum over “Muslims.”

In both respects, the executive order violates the “clearest command of the Establishment Clause.” First, as I developed in an earlier post, the Constitution bars the government from targeting Islam. One of the lowest of many low moments in Donald Trump’s presidential campaign was his December 2015 call for a “total and complete shutdown” of Muslim immigration.  The proposal treated as presumptively suspect a religion practiced by about 1.6 billion people worldwide, nearly a quarter of the globe’s population. Trump soon retreated to talk of “extreme vetting,” but he never gave up his focus on the religion of Islam. Friday’s executive orders are of a piece with his many anti-Muslim campaign promises.

As I wrote earlier, one of the critical questions with respect to the validity of executive action challenged under the Establishment Clause is its intent and effect. If intended to disfavor a particular religion, it violates the Establishment Clause. Here, there is copious “smoking gun” evidence that the president intended to disfavor Muslims on the basis of their religion.  It includes:

The executive order, of course, does not say in express terms that it is favoring Christians and disfavoring Muslims. But Trump is the signatory, and he has said so explicitly. Moreover, even absent that evidence of Trump’s invidious intent, the order on its face favors refugees from “minority religions” over those from “majority religions” in any given country. That distinction independently violates the principle of denominational neutrality, even if in some countries it means we will be privileging Christians and in other countries Muslims.

The law struck down in Larson v. Valente did not name any particular denominations, but it simply imposed differential registration and reporting requirements on religions that received more than half of their total contributions from members and those that did not. Even though the law did not single out a specific religion by name, it failed to treat all denominations the same and therefore violated the Establishment Clause. Thus, even if Donald Trump hadn’t admitted his unconstitutional purpose on TV, the executive order would be unconstitutional.

The notion that it is improper to use religions litmus tests at the border has wide appeal.  When Trump initially proposed his Muslim ban in December 2015, Sen. Pat Leahy (D-Vt.) introduced a resolution expressing “the sense of the Senate that the United States must not bar individuals from entering into the United States based on their religion, as such action would be contrary to the fundamental principles on which this nation was founded.”  It passed 96-4.  (Jeff Sessions, Trump’s nominee for Attorney General, was one of the four holdouts.) It will be interesting to see whether the Republicans continue to oppose religious discrimination now that it’s the official policy and practice of their president, not just the proposal of a a maverick candidate.

The ACLU has already filed suit to challenge the executive order, working with the International Refugee Assistance Project at the Urban Justice Center, the National Immigration Law Center, Yale Law School’s Jerome N. Frank Legal Services Organization, and the firm Kilpatrick Townsend & Stockton.  The suit was filed on behalf of two Iraqi refugees stopped at John F. Kennedy International Airport on the authority of the executive order, and it argues that the order violates due process, equal protection, international law, and immigration law.  We are also preparing an Establishment Clause challenge.  As we told President Trump two days after he was elected, if he pursues the many unconstitutional measures he proposed during the campaign, “we’ll see you in court.”