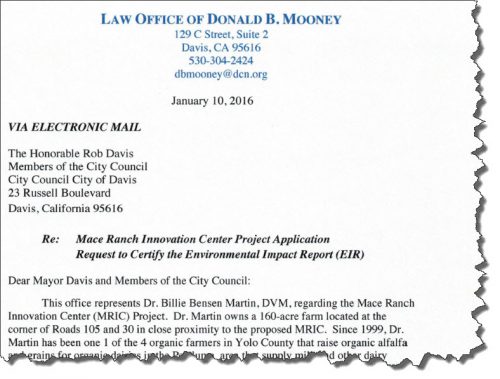 On Tuesday evening, Mayor Robb Davis at the Davis City Council meeting announced that the developers at the Mace Ranch Innovation Center had asked that the item requesting certification of the EIR be pulled from the agenda.

The Vanguard learned that the city had received a letter from Attorney Don Mooney.  The request has not been withdrawn, however, the developers are acting on the side of caution and wish to accurately address concerns expressed in the letter before going forward.

The letter from Don Mooney represents Dr. Billie Bensen Martin, who owns a 160-acre farm located at the corner of Roads 105 and 30 in close proximity to the proposed MRIC.  The letter describes, “Since 1999, Dr. Martin has been one 1 of the 4 organic farmers in Yolo County that raise organic alfalfa and grains for organic dairies in the Petaluma area that supply milk and other dairy products to local stores.”

Dr. Martin’s comments in the EIR “addressed concerns at the Project impacts to burrowing owls and polluted drainage from the Project that would negatively impact her 160-acre organic farm.”

MRIC had proposed a mix of industrial, commercial and retail uses totaling 2.7 million square feet on the 218-acre site located on the east side of Mace Boulevard near the Second Street intersection.  The EIR prepared included “an equal weight analysis of the project as proposed and an alternative that included housing.”

The draft EIR was released in August 2015, with the final EIR and response to comments back in January 2016.

In a letter dated October 5, Dan Ramos based his request for certification on the notion that “[o]ver the course of the next year and one-half, City staff, technical consultants, City commissions, the applicant team, your Council and the Davis community spent considerable time and energy participating in that effort which resulted in a very thorough environmental impact report (EIR).

“A certified EIR should accordingly serve as a tool for economic development as certification signals to potential users that this site, though not approved for any development, has undergone the most substantial part of the entitlement process and that the City of Davis is serious about keeping and attracting innovation employers,” he stated.

Don Mooney’s letter states, “On behalf of Dr. Martin, we respectfully request that the City Council reject RAMCO’s request to certify the Final EIR. First, RAMCO fails to provide a timeline for any future project approval. Thus, if the City moves forward with certification, the Final EIR could sit on the shelf for an indefinite period of time.”

Second he noted, “It is simply not in the public interest or good public policy to certify a Final EIR when the applicant cannot provide a timeline for project approval nor can identify the project that it intends to pursue. Thus, RAMCO’s request for certification is simply an attempt to preclude any further public discussion and participation on the Final EIR.”

In Dan Ramos’ letter to council, he acknowledged “that any future approval action may require further environmental analysis.”

He clarifies, “Changed circumstances only trigger the requirement for supplemental or subsequent environmental review if they are substantial and could lead to new or more severe significant impacts.”

He adds, “Changed circumstances do not require subsequent or supplemental environmental review if the resulting environmental impacts are already addressed in the Final EIR.”

In short, the request for certification, writes Mr. Mooney, exists even though “RAMCO recognizes that there may be substantial modifications to the Project or changed circumstances regarding the Project. Changes and modifications so significant that they would require subsequent or supplemental environmental review.”

Mr. Mooney also rejects the notion of market certainty, arguing, “This argument fails in part because RAMCO acknowledges that there may be need for additional environmental review due either a major modification for the Project and/or changed circumstances that may lead to new or more severe significant environmental impacts. Thus, RAMCO cannot offer the certainty that it seeks to offer.”

Therefore, Mr. Mooney writes, “It makes no sense from a public policy point of view to certify a Final EIR when RAMCO acknowledges the potential for future environmental review. Prior to certification of the Final EIR, the City Council should request that RAMCO submit a specific project so that it can be evaluated in light of the current Final EIR.”

Or fill out the form below to become a monthly subscriber

Share:
Tags:CEQAEIRMRIC
Previous : So, What Now?
Next : Commentary: Litigation Appears to End Hope of a Davis Hotel Conference Center