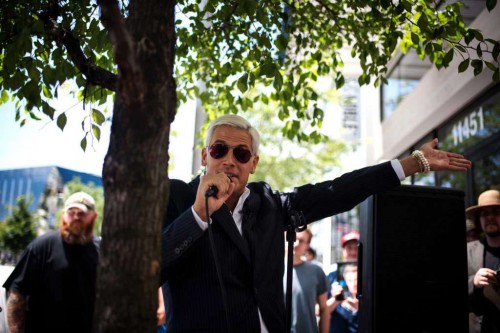 Being committed to building inclusive communities to prevent hate motivated violence is a tough business these days. The Davis Phoenix Coalition’s commitment to this mission was spurred by a Davis hate crime which was primed, as most hate crimes are by the perpetrator using derogatory language about the victim’s sexual orientation. The perpetrator followed his victim for two block shouting homophobic slurs. The follow up to this use of free speech was a broken body and spirit that thankfully, however slowly, recovered.

This week Milo Yiannopoulos will speak at UC Davis. Milo is famous for sensationalizing provocative ideas about gender, race and identity. His signature tactic of crossing the line of civility to elicit laughter and rapt attention falls in line with what has become common place entertainment.

Many dismiss his “performance” as not much more than that, a performance, designed to highlight the point, that open expression is at risk at the expense of political correctness. Indeed so much uproar over his speaking and debate about what constitutes free speech has occurred that the University developed a webpage titled Express Yourself, dedicated to; What does the First Amendment protect?, How do the UC Davis Principles of Community relate to the First Amendment?, What is hate speech, and is it illegal?, What is academic freedom?, When does speech become harassment?

In Alan Brownstien’s article in the Enterprise “Close-minded regarding free speech” he rightly states that now is not the time for censorship and that now more than ever our right to free speech will be of utmost importance. In the information recently released from the University under “What is hate speech?” this information is given; Legal scholars have supported the idea that the best way to respond to hateful or offensive speech is not to attempt to limit it but instead to encourage more speech.

For example, as Justice Louis Brandeis famously wrote, “[i]f there be time to expose through discussion the falsehood and fallacies, to avert the evil by the processes of education, the remedy to be applied is more speech, not enforced silence.” Whitney v. California, 274 U.S. 357, 377 (1927). The University Website goes on to say that “where racist, sexist, and homophobic speech is concerned, the ACLU believes that more speech—not less—is the best revenge. This is particularly true at universities, where the mission is to facilitate learning through open debate and study, and to enlighten.”

The Davis Phoenix Coalition has written the University to express our condemnation and concern over the hateful rhetoric promoted by Mr. Yiannopoulos visit and the unsafe climate these types of speakers breed.

While fully understanding and believing in the power and importance of the First Amendment, we also know that language informs human action. Most hate crimes are primed, as was the one that prompted the formation of the Davis Phoenix coalition, by the perpetrators using language to dehumanize their victims.

Likewise the use of satire to downplay the dehumanizing of people’s identity allows our society to cross boundaries by calling into question the validity of people’s dignity. That dignity, which should be sacred and the responsibility of all to uphold, is often dismissed as an overwrought preoccupation.

So if our only recourse to keep our democratic freedoms intact while promoting a world where all people are safe, respected and free from violence is to speak up against hateful rhetoric then we implore our community to speak up loudly, to join us in condemning intolerance, to renew our commitment to civil discourse and the respectful bridging of common values and differences in ideas.

Many deplorable ideas in our history have been done away with because we as communities and as a Nation collectively spoke up and changed our values. Changed what was acceptable; what was considered right.  What is more troubling than this speakers coming to campus, is the fact that this speaker was acceptable to the college Republicans who are hosting this event.

When they had so many stellar representatives of their group to choose from as speakers no one in their group called out the inappropriateness of this speaker. The calling out and questioning of what is acceptable; what is right is what will keep us moving towards a civil, just and democratic society.

Or fill out the form below to become a monthly subscriber