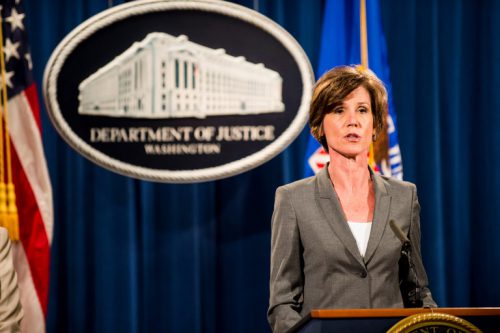 In what critics are likening to former President Richard Nixon’s “Saturday Night Massacre” in 1973, President Trump acted quickly to fire acting Attorney General Sally Yates, who had served as deputy attorney general under President Barack Obama, and replaced her with Dana J. Boente, the United States attorney for the Eastern District of Virginia, saying that he would serve as attorney general until Congress acts to confirm Senator Jeff Sessions of Alabama.

Ms. Yates announced on Monday she would not defend the President’s executive order closing the nation’s borders to refugees and people from predominantly Muslim countries.  The president subsequently fired Ms. Yates, stating that she had “betrayed” the administration.

The statement went on to say, “Ms. Yates is an Obama Administration appointee who is weak on borders and very weak on illegal immigration.  It is time to get serious about protecting our country. Calling for tougher vetting for individuals travelling from seven dangerous places is not extreme. It is reasonable and necessary to protect our country.”

“I am honored to serve President Trump in this role until Senator Sessions is confirmed. I will defend and enforce the laws of our country to ensure that our people and our nation are protected,” said Dana Boente, acting attorney general.

Ms. Boente issued a statement of his own, “On January 30, 2017, Acting Attorney General Sally Q. Yates issued a memorandum barring Department of Justice Attorney’s from presenting arguments in defense of the President’s January 27, 2017, Executive Order entitled ‘Protecting the Nation from Foreign Terrorist Entry Into the United States.’ At approximately 9:00 p.m., I was asked by the President to serve in the capacity of Acting Attorney General.”

He continued, “After having dedicated the last thirty-three years of my life to this Department, I am humbled and incredibly honored to serve as Acting Attorney General. Based upon the Office of Legal Counsel’s analysis, which found the Executive Order both lawful on its face and properly drafted, I hereby rescind former Acting Attorney General Sally Q. Yates January 30, 2017, guidance and direct the men and women of the Department of Justice to do our sworn duty and to defend the lawful orders of our President.”

Earlier in the day it was Ms. Yates who issued a stunning announcement when she refused to defend the president’s executive order blocking all refugees and certain foreign nationals.

“I am responsible for ensuring that the positions we take in court remain consistent with this institution’s solemn obligation to always seek justice and stand for what is right,” Ms. Yates stated.  “At present, I am not convinced that the defense of the executive order is consistent with these responsibilities nor am I convinced that the executive order is lawful.”

The Justice Department had said that the Office of Legal Counsel at the DOJ “had cleared the language” of  President Trump’s executive order.

However, as Ms. Yates explained, “My role is different from that of the Office of Legal Counsel (OLC), which, through administrations of both parties, has reviewed Executive Orders for form and legality before they are issued. OLC’s review is limited to the narrow question of whether, in OLC’s view, a proposed Executive Order is lawful on its face and properly drafted.”

She stated, “Its review does not take account of statements made by an administration or its surrogates close in time to the issuance of an Executive Order that may bear on the order’s purpose. And importantly, it does not address whether any policy choice embodied in an Executive Order is wise or just.”

She wrote that “my role as leader of this institution is different and broader. My responsibility is to ensure that the position of the Department of Justice is not only legally defensible, but is informed by our best view of what the law is after consideration of all the facts. In addition, I am responsible for ensuring that the positions we take in court remain consistent with this institution’s solemn obligation to always seek justice and stand for what is right. At present, I am not convinced that the defense of the Executive Order is consistent with these responsibilities nor am I convinced that the Executive Order is lawful.”