Donald Trump’s victory has been nothing but good news for the private prison industry.

The day after the election, shares of the two biggest private prison corporations — Corrections Corporation of America (CCA) and GEO Group — jumped 43 and 21 percent, respectively.

And share prices continue to soar. Since Election Day, CCA and GEO’s stock value has increased by 75 and 54 percent.

Investors have good reason to believe that Trump will rely heavily on private prison companies. When asked how he planned to reform the country’s prison system during a town hall in March, Trump stated: “I do think we can do a lot of privatizations, and private prisons. It seems to work a lot better.” 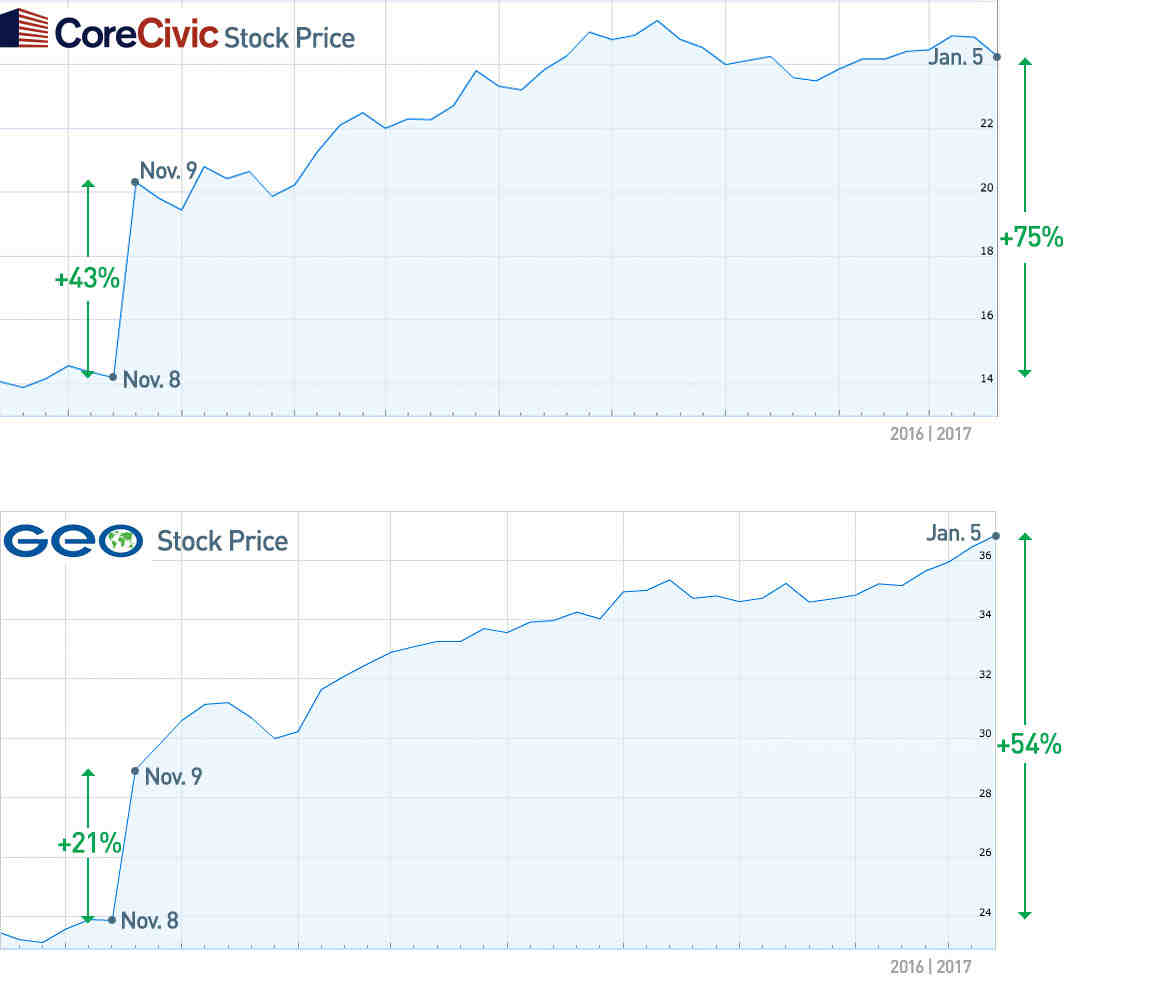 , a gap that private prison companies are more than eager to fill. If Congress fully funds Trump’s proposal to round up and deport 2 to 3 million immigrants in the first year of his presidency, the immigration detention population will more than quadruple — requiring the construction of scores of new jails for immigrants. 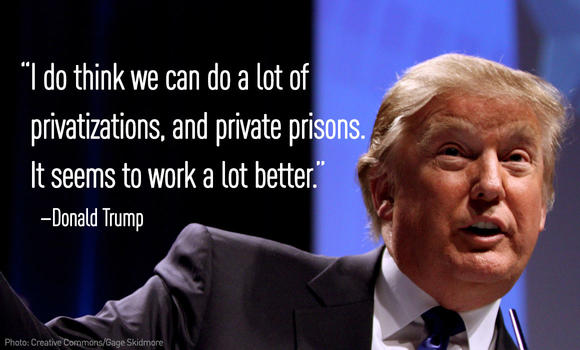 But the fact that the president-elect has selected Sen. Jeff Sessions as his nominee for attorney general gives the private prisons business even more to celebrate.

In October, according to Politico, GEO Group hired Sen. Sessions’ former aides David Stewart and Ryan Robichaux to lobby in favor of outsourcing federal corrections to private companies. GEO Group is the same private prison company that was accused of illegally donating to a Rebuild America Now, a pro-Donald Trump super PAC, earlier this year.

The ACLU does not endorse or oppose any nominee for public office, but we do analyze their track records. We are alarmed that if Sessions were confirmed as attorney general, the private prison lobby could have direct access to the head of the Department of Justice and tremendous influence over the Trump administration.

By their nature, private prisons depend on and profit from the mass imprisonment of human beings. And decades of experience have shown that handing people in government custody over to for-profit companies is a recipe for abuse and neglect. For example, at one GEO-run immigration detention facility in Colorado, Evalin Ali-Mandza, a 46-year-old immigrant from Gabon, died of a heart attack after medical staff waited nearly an hour to call an ambulance. One of the nurses even chose to prioritize filling out paperwork over dialing 911.

Federal officials have recognized this reality.

Publicly traded for-profit prison corporations like CCA and GEO owe a fiduciary duty to their shareholders — the public, the human beings in their custody, and their own employees be damned. And they have demonstrated their priorities time and time again.

In one ACLU case, a federal court found CCA in contempt because the company did not implement court-ordered improvements that would have made the prison safer. The year after a CCA employee was killed in a prison riot, company executives refused to hold a moment of silence in his honor at the annual shareholder meeting. Apparently, trying to mislead the public and escape this record of scandalous behavior, CCA recently rebranded itself “CoreCivic: A Diversified Government Solutions Company.”

Families and communities have suffered terribly from the mass incarceration binge. Yet year after year, the private prison industry and its stockholders have made billions off of this human misery. If implemented, Trump and Sessions’ hardline stances toward criminal justice and immigration have the potential to massively increase federal incarceration and immigration detention rates in the United States. And with direct access to Sessions from his former aides, it seems the private prison industry stands to gain tremendously if he is confirmed as attorney general.

Share:
Tags:ACLUJeff SessionsPrivate PrisonsTrump
Previous : My View: Council and Community Need to Get Behind a WFC in Davis Movement
Next : Should Council Certify MRIC EIR in Absence of a Project?

18 thoughts on “Trump and Sessions: Great for the Private Prison Industry, Terrible for Civil Rights”