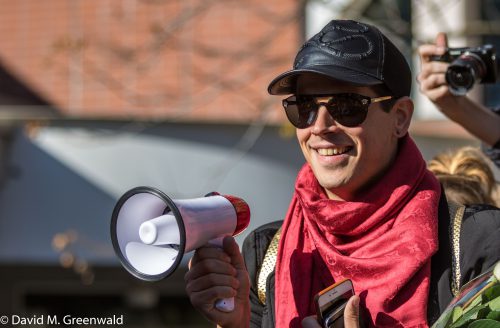 From the start the narrative emerging from the cancellation of the Milo Yiannopoulos event was a little too convenient – with the Breitbart columnist able to claim that the university pressured the Davis College Republicans into shutting down the event amid safety concerns.

“My event at UC Davis tonight has been cancelled after violence from left-wing protesters,” read a post on Yiannopoulos’ Facebook page. “There are reports of hammers, smashed windows and barricades being torn away. The campus police can’t guarantee anyone’s safety so I’m not being allowed anywhere near the building. Stay safe, everyone.”

The university denied that report from the start – issuing a statement that “there were no broken windows or other property damage during the protest. Earlier in the evening, one person was arrested inside the venue. No further arrests were made.”

The narrative then changed the next day at the protest on the quad.  Milo called the university administration “liars” in describing what happened and the events that led to the cancellation.  As he told the crowd and after that clarified to the Vanguard, it is true that the College Republicans had cancelled the speech, but that was because “they were told by police that they would be responsible for property damage.”

He told the Vanguard he was hoping with the march: “I want the university to admit that they intimidated those students into cancelling the event in violation of their First Amendment responsibilities.”

My view is that the Davis College Republicans, instead of being forced to shut down the event due to concerns about liability, chose to shut it down in order to be able to claim victim status.

The Vanguard still has pending records requests on communications between the university and students.

What we have obtained shows that the College Republicans had a $2 million general liability insurance policy for the event, which likely would have covered them in the event of property damage from protesters – by the way, not a clearly foreseeable occurrence, therefore unlikely that the university could have held the student group to be liable as claimed by Milo.

The Vanguard was told as well that the university has its own insurance that would have covered a lot of the damage.

So the idea that the university would threaten the students as implied, but discounted by university spokespeople in conversations with the Vanguard, seems unlikely.

Actions speak louder than words.  We need to consider what happened after the cancellation to have an indication of motivation.

As we now know, the College Republicans took out a standard $2 million general liability insurance policy for the January 13 event.

But there was no insurance and no police presence the next day.  As it turns out, the protesters largely (there were a few there) didn’t show up on the 14th, but there is no way that either Milo or the College Republicans knew or could have known this in advance.

In short, if they really feared liability – the far more risky path was to go out the next day with no insurance, and no police or Aggie Host presence.

So, they get shut down due to safety concerns, but yet take the more risky path the next day without insurance, Aggie Hosts or police?

That doesn’t seem to make a lot of sense if their chief concern on Friday night was liability, or even safety.

There are a lot of questions I would want to ask about the security for Friday night, as well.  For instance, why wouldn’t the police and Aggie Hosts rope off a path to the entrance of the facility so that the protesters couldn’t block it?

But that is probably not the College Republicans’ call.  What we do know is that Milo gave two accounts that were somewhat in contradiction with each other – one on Friday night where he said, “They keep saying that the College Republicans were the ones to shut down the event last night. Not true. My staff were in meetings with the campus police and university administrators last night and were told by them that the event could not proceed. “

All of this points to the idea that the College Republicans and Milo simply used the protests as an excuse to further their claim that the university was cowering to the activist crowd.

It also allowed them to play victim.  When the Islamic incident occurred, they were quick to denounce it, while claiming victim status.  In a statement, they called themselves “fellow victims of violence and intolerance…  Our right to free speech was infringed when protesters became violent enough to force the UC Davis administration to stop our event.”

Notice they not only claimed common cause with the Islamic Center as “victims,” but they again perpetuated the unfounded statement of “violence” and again claimed that the UC Davis administration stopped their event.

It is certainly a convenient explanation – one that advances both theirs and Milo’s world view, but there are some holes forming in it that should call us to question that explanation.

We may never know for sure.  But we are continuing to examine it.

32 thoughts on “My View: Alternative Explanation on Milo Taking Shape”