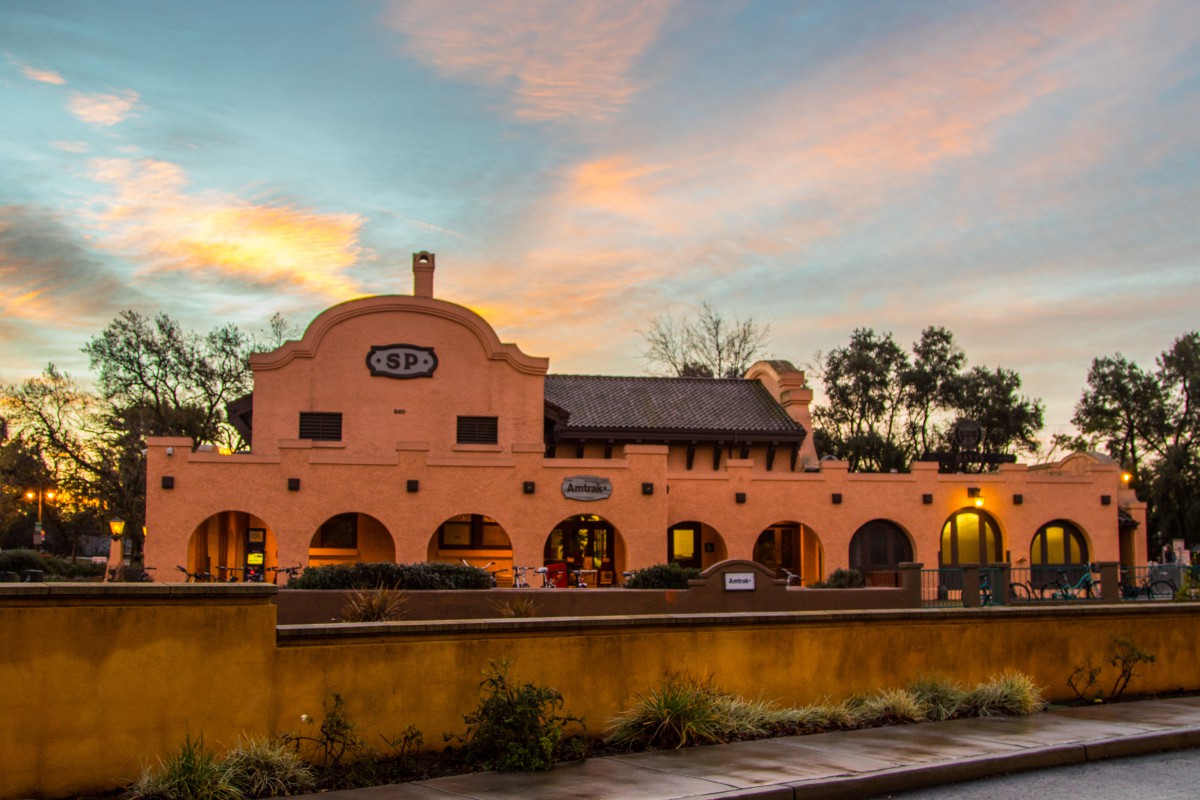 The city of Davis is taking on an update of the core area portion of the General Plan.  They initiated a visioning platform for downtown and conducted a community survey during much of the month of November, with 1467 people taking the survey.

What was interesting is they wrote: “We have a great downtown; it is the core of our City. To keep our downtown thriving and vibrant, the City is discussing ways to improve the atmosphere downtown.”

That, of course, raises a question: do we have a great downtown and is it thriving and vibrant?

Here are some survey results along with my commentary.  As someone who has worked in the downtown for more than five years, I agree with a lot of the results. 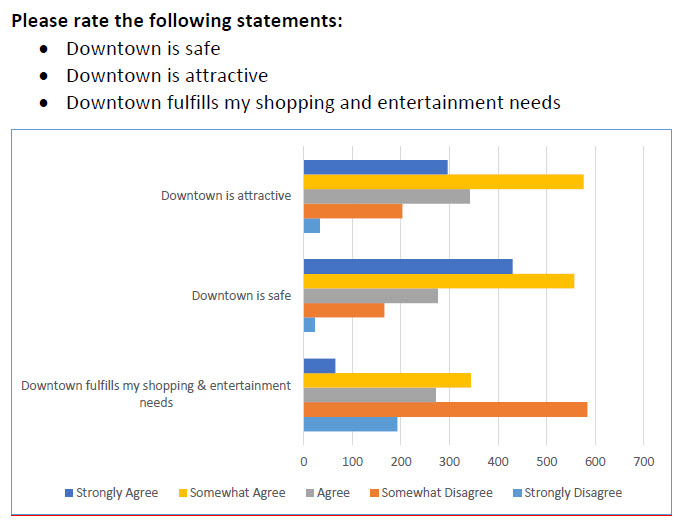 The vast majority of the people surveyed found the downtown to be attractive.  That is not a huge surprise – the downtown for the most part is well laid out, easy to walk, and aesthetically pleasing.

The second question is more interesting.  A huge majority of people agreed (ranging from somewhat to strongly) that the downtown is safe.  It might have been more interesting had they broken down the question to times of day.  After all, it was just in September 2015 that the murder at KetMoRee caused community discussion about the safety of downtown.

Of course, most of the day downtown has always been extremely safe.  Had they asked that question a year earlier, would the results have been different?  Is this a result of changes made to the downtown or do most people simply not experience Davis after 10 pm?  Hard to know and, without knowing that variable, it is hard to assess the answer.

Where Davis takes a huge hit, however, is on the issue of whether the downtown fulfills shopping and entertainment needs.  The answer there is a big no.  Nearly 800 of the respondents either somewhat or strongly disagree with the statement.

That is the big problem that Davis faces.  There is limited functional retail in the downtown.  And, as someone who eats in the downtown many times each week, I would argue that there is no downtown restaurant that I would drive 20 minutes to get to Davis in order to eat at.  That’s a problem.

This portion of the survey leads to me to this conclusion, Davis downtown is relatively safe, particularly during normal hours of operation, it looks nice, but it is not functional.

This is bolstered by the next section. 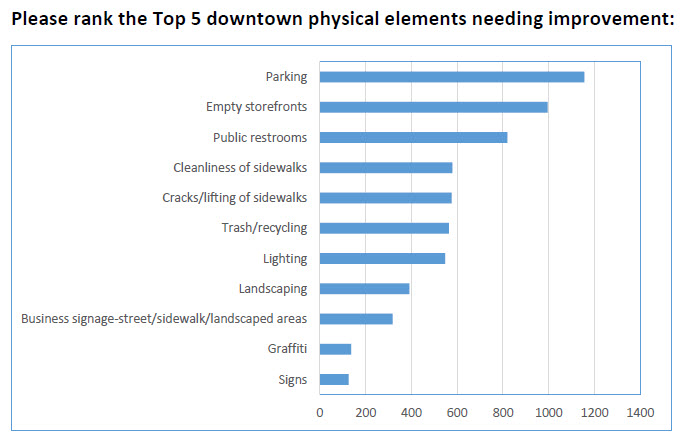 The respondents in my view really nailed the top three problems – after that I think it’s a matter of taste, although I really like that the issue of cracks and lifting of the sidewalks were raised.

I know the purists will argue that there is always space in the 4th and G parking lot.  But a lot of people view that as way out of their way – even though it’s a relatively short walk to most places, at least on the east side of downtown.

The reality is that most people don’t like dealing with the parking in downtown and, coupled with the lack of retail and entertainment options, many do not come downtown.

As someone who holds frequent meetings in a G Street office these days, people are often late from having to circle the block looking for parking.  Parking is an issue and one that we need to address sooner rather than later.

Empty storefronts are an increasing problem belying the lack of vibrancy of the downtown.  Retail has been bad for some time and has continued to take a hit.  Restaurants are mediocre.  So, unless you come downtown for drinks or coffee, there is not much going on.

Last week, during the panhandling discussion, the council discussed the issue of public restrooms – or the lack thereof.  Huge problem.  I remember going to Picnic Day a few years ago and I could neither find a drink of water or a public bathroom.  After some complaining, they started bringing portable restrooms out for that event.

As a parent, not having public restrooms creates a problem because kids need quick access.  Often it was hard to find a restroom.  Granted, most places don’t say anything if you are a non-customer rushing your kid to their restroom, but still.

Then there is the bigger problem – people drinking late at night and having to relieve themselves in public due to lack of open restrooms, and the homeless.  The council seems to acknowledge the problem and to have prioritized it.

Those are to me the biggest problems, but people have brought up the cleanliness and cracks in the sidewalk.  A year or two ago my daughter tripped over such a crack and scraped herself up, and that’s a general problem with our infrastructure that we need the resources to fix.  It has only gotten worse. 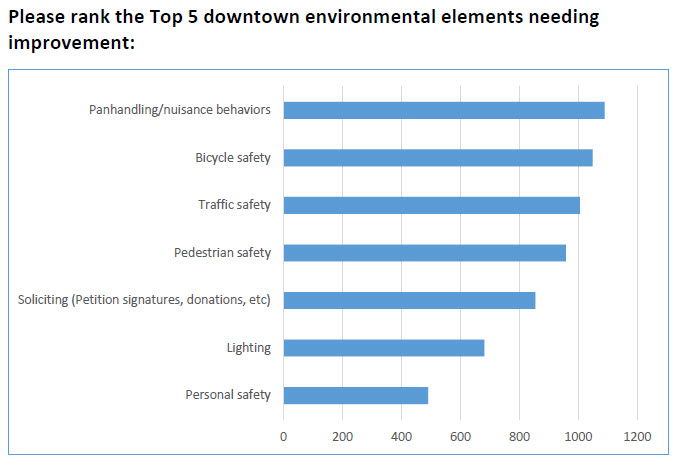 Last week we spent a lot of time talking about panhandling.  It is interesting that that is listed as the top priority, because for me the far bigger problems are the next three: traffic safety – bikes, pedestrians, and motor vehicles.

The city made every intersection a four-way stop in the core area a few years ago, which was an improvement over when the few non-four-way stops produced unpredictable driving patterns.  But, at busy times, the configuration creates conflict as three modes of transportation create 12 different effective cycles.

People complain about bikes jetting through intersections without braking, but cars drive too fast and are too quick to veer around double-parked vehicles.  A big improvement was the double-parking law, and finally that seems to be adhered to.  Pedestrians will dart into traffic as well, causing hazards.

I don’t have a good answer, but to me that is the biggest environmental element.

I like the fact that they listed the solicitation.  As a non-profit, I try to be understanding, but walking along Second Street, there are weeks on end you get hit up by solicitors every time you walk down the street.  It is a nuisance.  I think they end up hurting themselves with their aggressive tactics.

The vast majority of people who responded are Davis residents, but only a small number, maybe 100, were college students.  They had just under 200 who were downtown employees or business people and another nearly 400 were parents of school-aged kids.

The key question is what can be done to improve the downtown – we will talk more about that at a future time.

16 thoughts on “My View: Do We Have a Great and Vibrant Downtown?”