At a recent meeting of the American Geophysical Union, Governor Brown called on climate scientists to tell the truth in the face of “climate deniers, big oil and big financial structures at odds with the survivability of the world.”

He defended California’s leadership in reducing greenhouse gas (GHG) emissions: “We have the laws, we have the tools of enforcement, and we have the political will…And whatever Washington thinks they’re doing, California is the future!”

California has the most aggressive climate change laws in the nation, and they have just become more aggressive.  But the question remains whether Californians have the political will to withstand the likely negative impact these new laws will have on their wallets.

Most everyone is familiar by now with the California Global Warming Solutions Act (AB 32), signed by Arnold Schwarzenegger in 2006.  It requires state GHG emissions to decline to 1990 levels by 2020. 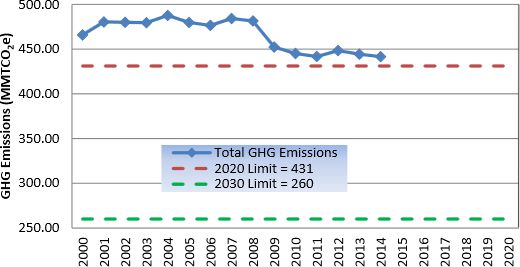 Both Brown and Schwarzenegger claim that state climate policy benefits the economy.  At a 10-year anniversary celebration of AB 32, Schwarzenegger said that leaders from all over the world are jealous of what California has accomplished. “We are a perfect example that you can protect the environment and grow economy simultaneously,” he said.

However, prominent energy market experts do not think the verdict is in yet.

Environmental economist Charles Kolstad of Stanford, who is a part of the UN Intergovernmental Panel on Climate Change and advisor to the state on AB 32, told Politifact that it may take another ten years to tell if climate change rules have helped or hurt the state economy.

More concerning are expert opinions like that of James Sweeney, Director or Standford’s Precourt Energy Efficiency Center.  He recently told the LA Times, “It is dubious as to whether the [2030] California goal will be achieved without large economic costs.”

The California Air Resources Board (ARB), the agency that administers state climate law, has been busy on its 2030 Scoping Plan.  This is the blueprint to meet SB 32 that ARB and other state agencies will adopt as regulations, incentives and other programs.  The final plan is scheduled to come out this month.

Last summer, a Public Policy Institute survey concluded that Californians are willing to pay higher energy prices to achieve the 2030 goals.  But polls and surveys have limited value, as we learned from the presidential election.

So will Californians get behind the governor and the stricter rules experts say are necessary to avoid catastrophic climate change?

We will follow the rollout of new climate rules and their economic impact through 2017.  This promises to be an interesting ride.

Share:
Tags:AB 32Climate ChangeJerry Brown
Previous : Justice Watch: A Lot of Finger Pointing out of Chicago
Next : Monday Morning Thoughts: State of the City Needs to Be a Call to Action

11 thoughts on “Will Stricter Climate Change Rules in 2017 Propel or Choke the California Economy?”