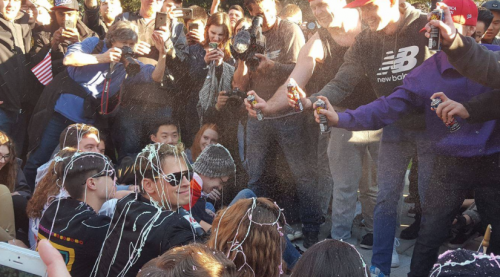 A lot has happened in Davis over the last few weeks. Milo, the hate crime at the Islamic Center, the rallies at Garamendi’s office, the outpouring of unconditional love and support of the Muslim community, and of course Trump’s Islamophobic executive order that left hundreds of people stranded across the country at airports. Somewhere, in the deep recesses of my consciousness, I have always felt that Davis was better about creating and fostering a community of tolerance and inclusiveness. While I still feel that is mostly true, I have to admit I am ashamed and angered that these kinds of things can and do still happen here, in this community that I love. There are still those in our community who would seek to do others harm only out of ignorance, intolerance, bigotry and racism. There are also those who seek to downplay or co opt the outrage of a hate crime in our community, by attempting to draw attention to themselves. Enter the Davis College Republicans.

Here is the quote from the Davis College Republicans Facebook page, discussing the hate crime at the Islamic Center:

“The Davis College Republicans condemn the actions of the criminals who vandalized the Islamic Center, breaking windows and leaving bacon on site. We do not condone violence and/or hate crimes. The Islamic Center of Davis is a peaceful organization, and one of the few proponents of open discussion and education about their culture and religion. As fellow victims of violence and intolerance, we stand with the Islamic Center as they search for the perpetrators of this crime, and hope that they find the criminals so that we all may live in a peaceful atmosphere.

“The ASUCD Senate has made a statement today implying that our Milo event caused the vandalism at the Islamic Center of Davis. Our right to free speech was infringed when protesters became violent enough to force the UC Davis administration to stop our event. ASUCD, the body representing our students, has claimed that ‘[a]s a student government, it is our collective duty to protect our students.’ As a student government, it is your duty to protect the rights of all students, not just those with whom you agree. You should have publicly defended our right to free speech. Instead, you have wrongly cast blame on an organization interested in diversity of thought, alienating a minority group of students on campus. You are part of the reason why conservatives feel that they cannot openly express their beliefs.”

Instead of simply expressing outrage at the hate crime committed, and the hurt and pain of the Muslim community, the Davis College Republicans sought out to make themselves the victims of this heinous act. They also manage to toss in a slight against Muslims everywhere by implying their faith and culture are closed to discussion and education about their religion. So if this is what they are saying in public, what are they saying in their club meetings?

I recently sat down and interviewed someone who attended the Davis College Republican meeting immediately following the Milo event. This person shall be known as “M” for the rest of this article. “M” took notes of who said what, and when. Here are some more hits:

“I know that Davis Phoenix Coalition was the one who was leading the charge against our event.” This accusation is particularly absurd, given the Phoenix Coalition’s mission of inclusion, engagement and tolerance.

If good governance is more your thing, then how do you feel about public funds being used to host Milo? “The total cost for the security was $405 and we actually worked something out with the university they were going to pay half of that. We actually got them recently to waive the fee,” a Davis College Republican said.

The College Republicans also complained about lack of diversity in their teachers – as evidenced by this quote saying “one student actually talked about how republican professors needed affirmative action and compared their fear of talking about politics with being closeted.”

To bring this full circle, they openly joked about the recent hate crime. While they expressed disdain for vandalism, it was clear they were not taking the incident seriously. College Republicans were joking about cooking the bacon left at the Islamic center and that the vandals were “very lazy.” Hate crimes are not to be taken so lightly.

So why write about this? It is no secret I hold the Davis College Republicans in contempt. They are hypocrites in every sense of the word. They complain loudly and clearly about their free speech being violated, yet when engaged by the community to discuss their views, they refuse to do so. Many open letters have been written to them, as have emails, and Facebook messages. All go noticeably unanswered. They say they are not sexists, but when an elected official from their party makes a blatantly sexist joke, they do not call him out on it. They rail against affirmative action, but advocate for affirmative action for professors with a conservative worldview. They complain about safe space culture, but that is exactly what they have created for themselves. They have created a little bubble, where everyone has homogeneous political beliefs and convictions. They petulantly whine when they are not the center of attention, as they did with the hate crime Facebook post. What is next? Do they feel the intense need to retreat to their participation trophy rooms and cuddle with their favorite confederate flag?

While some of this may seem hyperbolic, I think it is worth discussing. The Davis College Republicans are responsible for a lot of what has happened in the last few weeks. I want to be clear, I do not blame them for the hate crime at the Islamic Center, but I do think they were unhelpful at best in the aftermath by trying to make themselves the victims of that crime. The problems of the Milo event are purely of their doing. Their participation in the re enactment of the pepper spray incident only shows their callousness to the suffering of others in the community. It is as if they live in a completely different world, where they are somehow victims, and the people of the community are their oppressors.

As many of you know, I was raised in a conservative household. I have many Trump supporter friends and family. They, like the College Republicans like to tell people they need to have thicker skins, and that harm caused to “feelings” or, as Alt-Right millennials say, “the feels” should be downplayed. Usually this narrative ends with something like “the greatest generation never dealt with this” or a totally irrelevant narrative like “socialism never works.” My personal favorites are when they make ad hominem attacks instead of addressing the underlying issues. They will call their opponents “cupcakes,” “socialists,” “snowflakes.” But when called out for doing, or saying, something racist or sexist, they become angry and lash out at those who called them out. I think they are the real “snowflakes,” thin-skinned, vain and above all hypocritical. It takes strength of character to admit fault, and make amends for wrongdoing. The Davis College Republicans have caused a lot of hurt and anger in our community, and they still have a lot to answer for.  I would like to thank “M” for sharing their notes with me. I am sure there will be those who are upset with their dirty laundry being aired.

Sean Raycraft is a lifelong Davis resident, and Shop Steward.

55 thoughts on “Davis College Republicans are the Real Cupcakes”