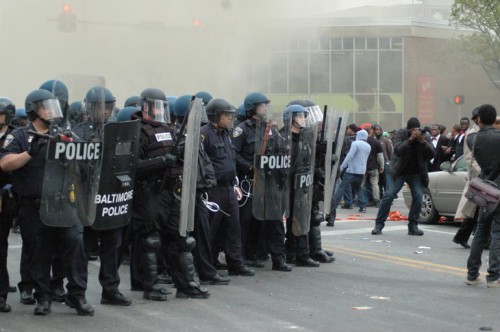 Something does not add up.

President Trump put an executive order into effect last week to, in his words, “stop crime and crimes of violence against law enforcement officers.” But when the facts about police, violence and victims are considered — real facts, not alternative facts — the math doesn’t work. Like Winston Smith in George Orwell’s 1984, we are being asked to believe that two plus two does not equal four.

Despite horrific videos of police violence combined with overwhelming evidence of decades of such abuse, Trump has chosen to focus instead on the far less frequent violence against police officers. Rather than work to save the public from unnecessary state violence, which would go a long way to improving the trust between police and the communities they serve, he has directed the Department of Justice and other federal agencies to consider expanding the criminal code and “establishing new mandatory minimum sentences for existing crimes of violence against law enforcement officers.” He does this even though laws already exist that impose the strictest penalties for killing a police officer.

If making America safe is the true goal, what facts led the president to decide that significant time, money and effort should go toward additional protections for police instead of protections for people of color, who are often targeted by police? Are police being killed at a higher rate than in the past? Is this why America is not safe?

Here are the facts: According to National Law Enforcement Officers Memorial Fund 1,439 officers have been killed in the line of duty over the past 10 years — that’s an average of 144 deaths per year.

Preliminary reports from the FBI show that 41 law enforcement officers were maliciously killed in 2015. That’s down almost 20% from 2014, when 51 officers were intentionally killed. Sixty-four officers were shot and killed in 2016, including the shootings that made national headlines in Dallas and Baton Rouge.

Every killing of a police officer is a terrible tragedy. But the bottom line is that officer deaths have dropped overall since the 1970s, with the number of officers killed on duty falling roughly by half during that time, according to the National Law Enforcement Officers Memorial Fund.

If the president wasn’t busy spinning fiction, he would have more time to pay attention to the mounting number of people of color being killed by police.

According to the Guardian, 1,146 people — armed and unarmed — were killed by police in 2015. The total number of law enforcement officer deaths from 2011 through 2015 was 662. In the world of real facts, these statistics may justify a federal examination of police violence, but that is not what the president proposed. Indeed, Trump has managed to make multiple speeches about violence in America with little to no mention of victims of police violence, in number or by name.

This is not about being anti-police or pro-police.

One police officer killed in the line of duty is one too many, and we know that policing can be a dangerous job. Of course there are steps that can be taken to make police officers and the communities they serve safer. Back in 2014, President Obama did just that with an executive order creating the Task Force on 21st Century Policing. Its mission? Fix the rifts between local police and their communities in Ferguson, Mo., and around the country. A sentence from the Obama administration’s task force announcement summed the goals up best: “As the nation has observed, trust between law enforcement agencies and the people they protect and serve is essential to the stability of our communities, the integrity of our criminal justice system, and the safe and effective delivery of policing services.”

The resulting task force included representatives from law enforcement and community organizations, and it produced robust recommendations to forge collaborative relationships between the police and the public to increase safety. They proposed training for police officers in de-escalation and racial bias. These steps are serious, fact-based solutions that are not easy but will have an impact.

Why not start with policies that have been put in place to solve problems that actually exist?

Creating a working group to address an imaginary trend is like telling you that two plus two is not four. George Orwell described it clearly.

The road to sane criminal justice policy is not paved with alternative facts. Two plus two is four, even if the president says otherwise.