Organizers describe that at least 170 people showed up at what appeared to be a last-minute protest in Davis in front of Congressman John Garamendi’s office, to protest Trump’s policies in general.  One by one, people who would be impacted by things like the repeal of the Affordable Care Act spoke about their personal experiences and their desire to see Congress fight these changes.

All present were invited to raise their most pressing concerns, and many of all ages did so.  Issues ranged from loss of health care, Medicare, last weekend’s immigration ban, ethnic and religious and racial profiling, infringement of science and research, religious freedom, and others.

Seth Sanders, a UC Davis Professor in Religious Studies, affiliated with the group, Indivisible Yolo, told the Vanguard that the group had not expected this level of turnout, with constituents coming from Winters and other rural locations to attend the event.

He told the Vanguard that the Garamendi staffers “had never seen this level of organization and energy – period.”  They were quickly able to get Congressman Garamendi on the phone to talk from Washington to the crowd.

Congressman Garamendi said, “Washington is in an absolute state of confusion and chaos.  The entire Congress is wondering what in the hell is he going to do next.  The man is just out of control.”

He said, in the last ten days, “everyone Democrat and Republican is just shaking their head, thinking oh my God, now what.”  He said that the Supreme Court announcement, which happened later in the day, would raise another raucous response.

“Just look at his inaugural speech, which was one of the darkest and meanest in history,” said the normally mild-mannered congressman.  He noted that millions of people will lose their health care and 5000 people in Davis are directly affected by the immigration executive order.

The congressman said he was going to be talking about the wall later in the day. “If he wants to spend $20 billion on a wall, I have $20 billion that could be spent usefully.”  He talked about the need to build bridges, roads, education and other programs where the money could be spent.

One of the people gathered told the congressman, “No shaking of heads, do something.”

The congressman responded, “My protest is going to take place here in Congress, on the committees, and specific action.”

Organizers for the event told the Vanguard that Indivisible Yolo is a group of concerned constituents that formed after the election, who are worried about the direction the Trump administration is taking the country.

“We believe his agenda will take America backwards and must be stopped. As Rep. Garamendi is our voice in the House of Representatives, we are making sure he hears what is important to us so he can fight for it,” they said in a statement.  “Many of us are new to political activism and are grateful to have a blueprint for engaging in the political process effectively.”

“I started our local chapter because I felt I couldn’t sit silent and watch our country slip into a xenophobic autocracy, and since doing so I have met so many others who felt the same. I have never seen this level of energy for activism in such a broad cross-section of people, and am excited at the multitude of people who care that are newly active,” said Emily Hill, founder of Indivisible Yolo.

She added, “Unfortunately, our representatives don’t have the power to set the agenda at the national level because they are part of the minority party, so they have to play defense. We expect them to put up a strong and unified opposition to this administration and will lobby them to do so.”

Seth Sanders told that Vanguard that they came to this event “because, while we were delighted to see our representative at the Women’s March and his strong statement on Trump’s political undermining of the national security council, to make it clear to the American people that their national security comes before partisan politics … but in this time of constitutional crisis we need more than statements.

“When Customs and Border officials are openly breaking the law, defying federal orders, we want to hear what he’s doing to make them follow the law. If he attended Trump’s inauguration to ensure a peaceful transfer of power, what did that get his constituents if the incoming administration acts unlawfully?” he said.

Mr. Sanders added, “We understand that, especially with a GOP majority in congress, reaching across the aisle is crucial, and he is an experienced legislator who can work on vital things like Veterans’ issues with Republicans. So what specific ways is he going to use his bargaining power?”

After the public event, members of the group spoke with Congressman Garamendi’s staff for over an hour.  Ms. Hill described that “(we) got assurances that the congressman held views very much in line with our own, but we need more than assurances. We need a vocal and unwavering representative for the fight ahead that does not compromise with a racist administration.”

She added that the Congressman’s staff was very welcoming and indicated his district office is always open to constituents.  The group plans to speak with them on a regular basis.

John Evalle, Garamendi’s district director, said “more to follow on the specifics of a pending meeting in March.”

Seth Sanders told the Vanguard that they asked the congressman about his plans with regard to the administration’s growing intimidation of immigrants including the Executive Order (EO), because, with UC Davis and Yolo, Garamendi represents a diverse district shaped and fueled by hard-working immigrants, from agriculture to tech research.

“We asked for a clear statement on if, unlike Rep. (Ami) Bera, we are told he will protect the city of Davis’ decision to be a sanctuary city for immigrants and refugees,” Mr. Sanders said.  “And we need to hear that he is addressing this constitutional crisis, with officials of the executive branch refusing to follow the rulings of the legislative branch.”

There were a dozen passionate speeches from constituents, ranging from Marine Corps veterans to longstanding pillars of the community, from places like Yemen, at the rally in front of the congressman’s office.

A Davis student began describing how his father sees the current atmosphere in America beginning to resemble what he saw under the communist regime in Afghanistan in the 70s and 80s . That atmosphere, “especially forced disappearance of political dissidents, has scared him to the point where he is scared of me – a 34-year-old man – being out after dark because he thinks the FBI would pick me up and disappear me.”

He spoke of Sunday, being at a family event: “All the people there could only speak about one thing – the Muslim Ban. Everyone was afraid that this is just the beginning. It would end with all Muslims either being deported – regardless of immigration status or citizenship – or locked up in internment camps. One relative said, ‘America used to mean freedom. Now, it has lost that meaning.'”

He added, “A Yemeni friend of mine who is a doctor on the east coast is on a green card. Today, he was informed by immigration authorities that his green card’s renewal will be put on hold. As he called it, now he’s in purgatory. This is a man deeply engaged in the community and busy saving  American lives. Yet, he is being treated like an enemy of America when he should be thanked and appreciated for his efforts.”

Ms. Hill added, “Today we talked about [the threats to] Davis’ students and world-class agricultural and scientific research from the Muslim ban and EPA freeze, and the danger to Californians’ health from ACA repeal.”

She said that one specific request was to meet with Congressman Garamendi himself when he is next in the district, and have a phone meeting before then, and they are working to schedule the face-to-face meeting in March.

She added, “We will continue to ask for a teleconference before then.” 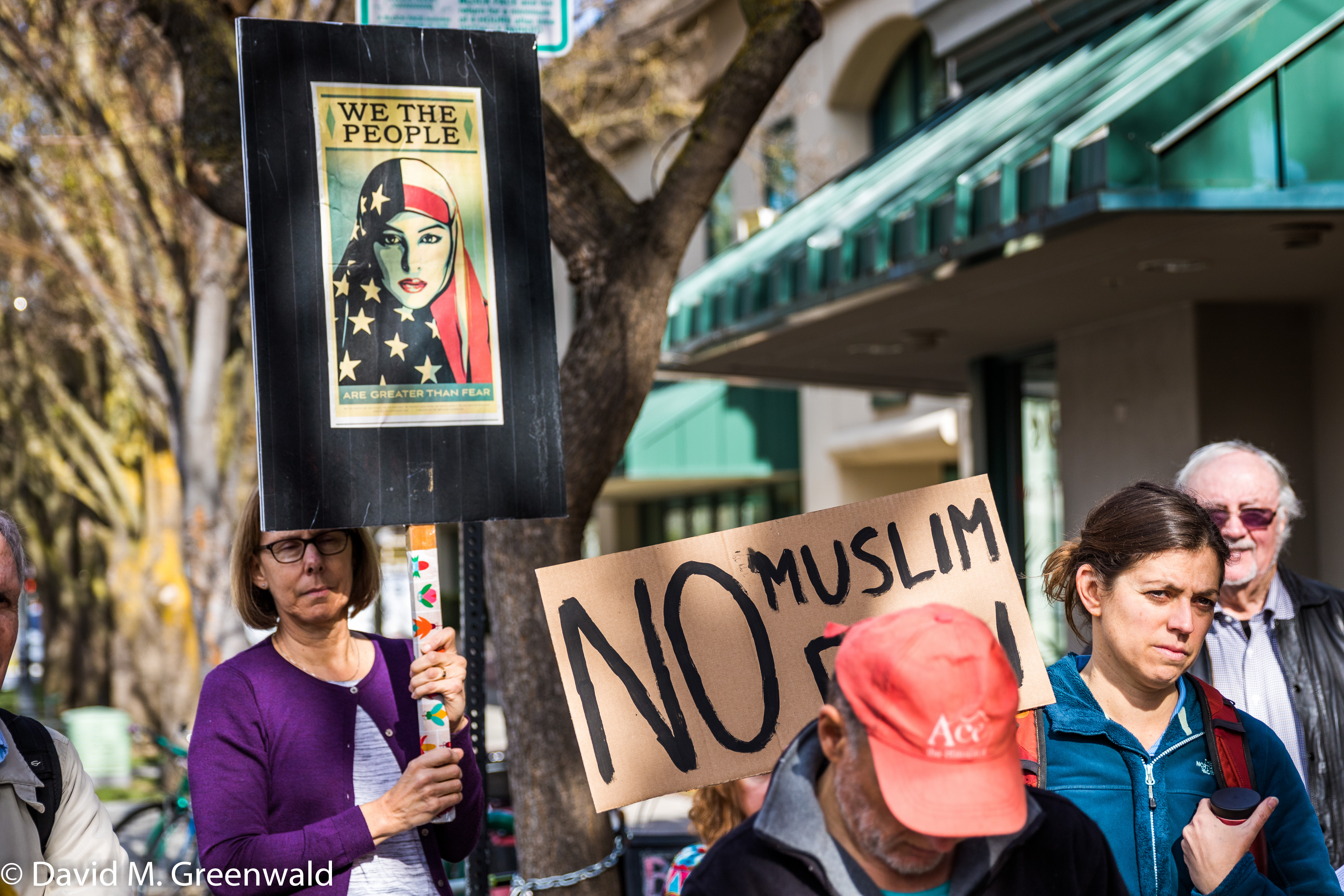 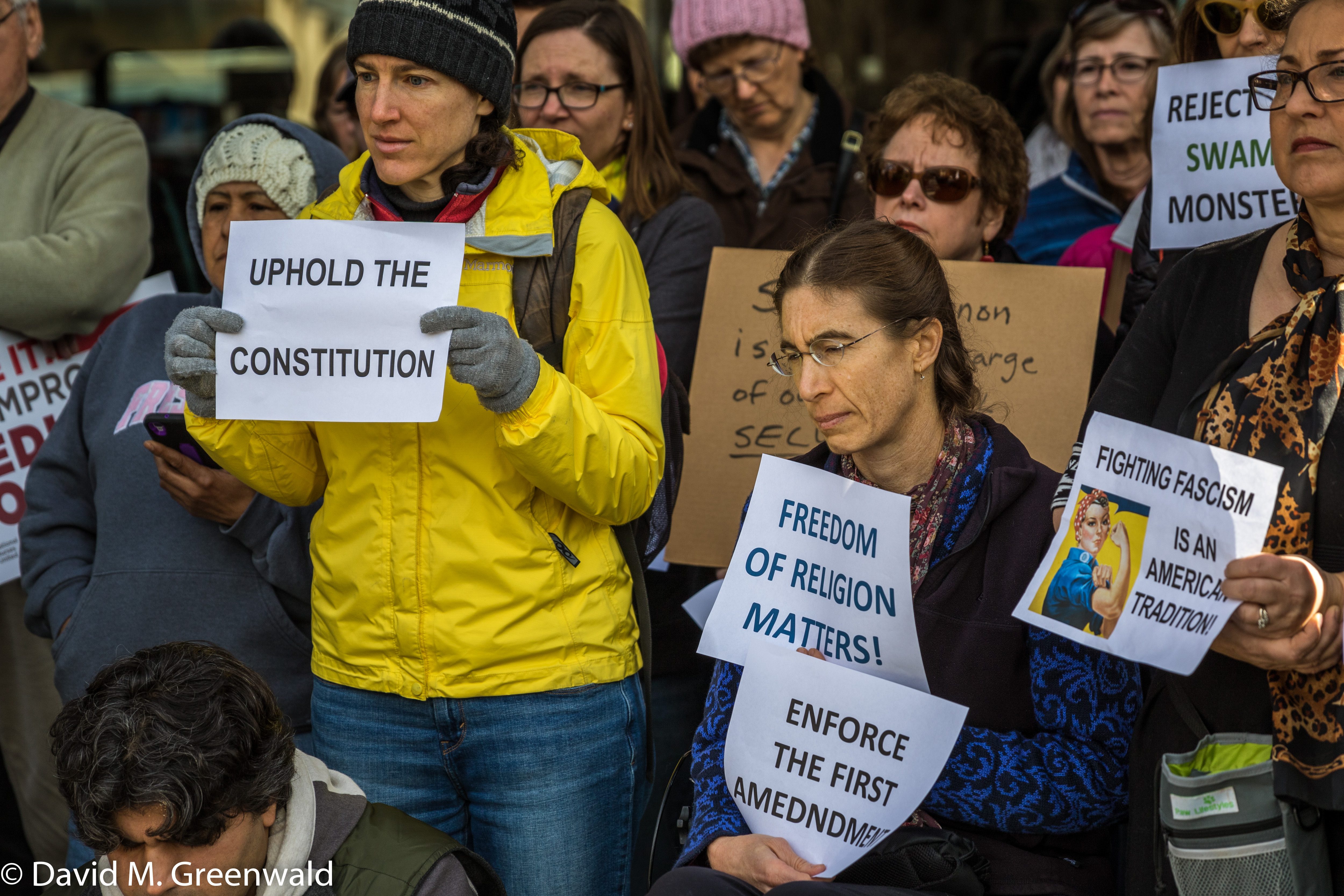 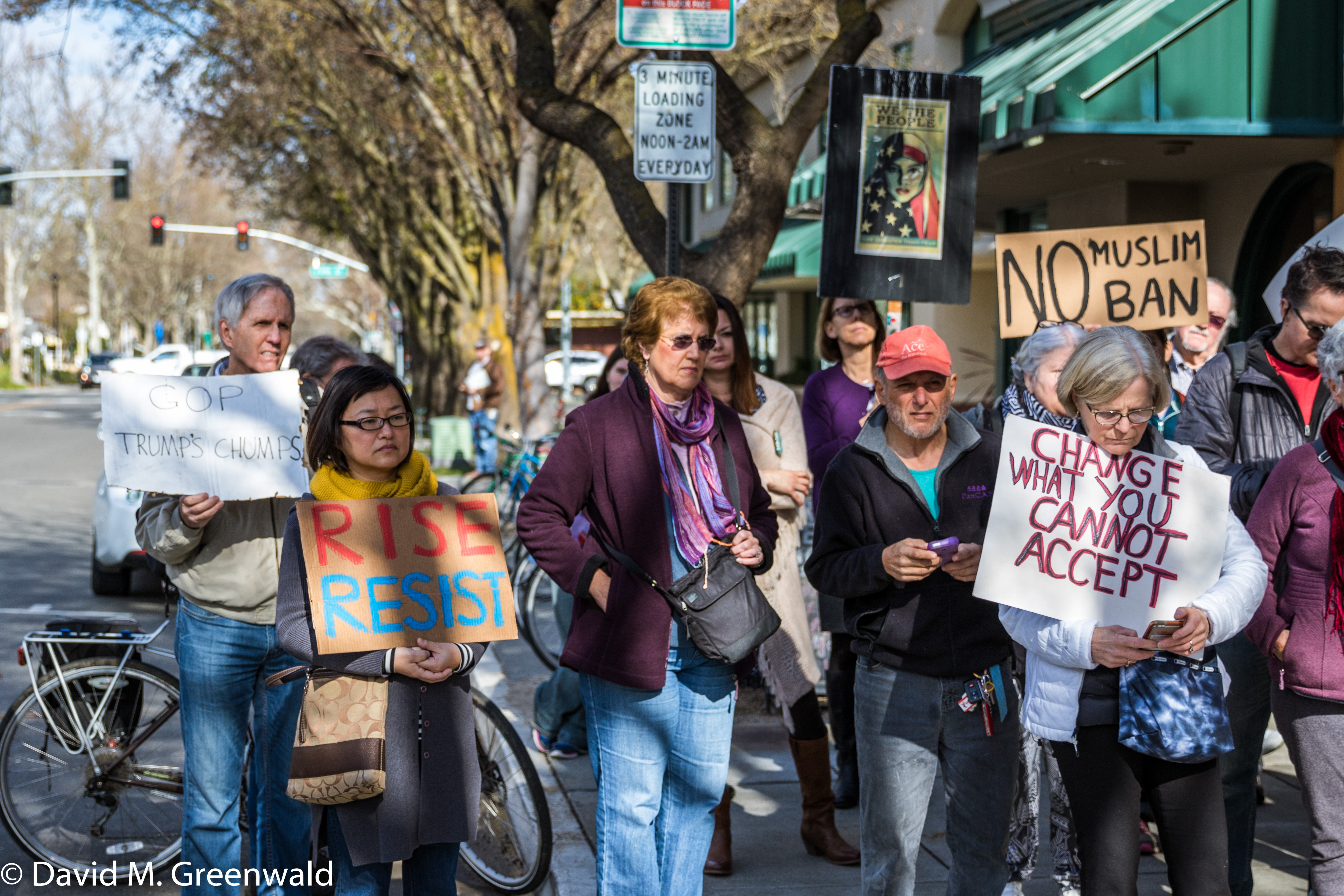 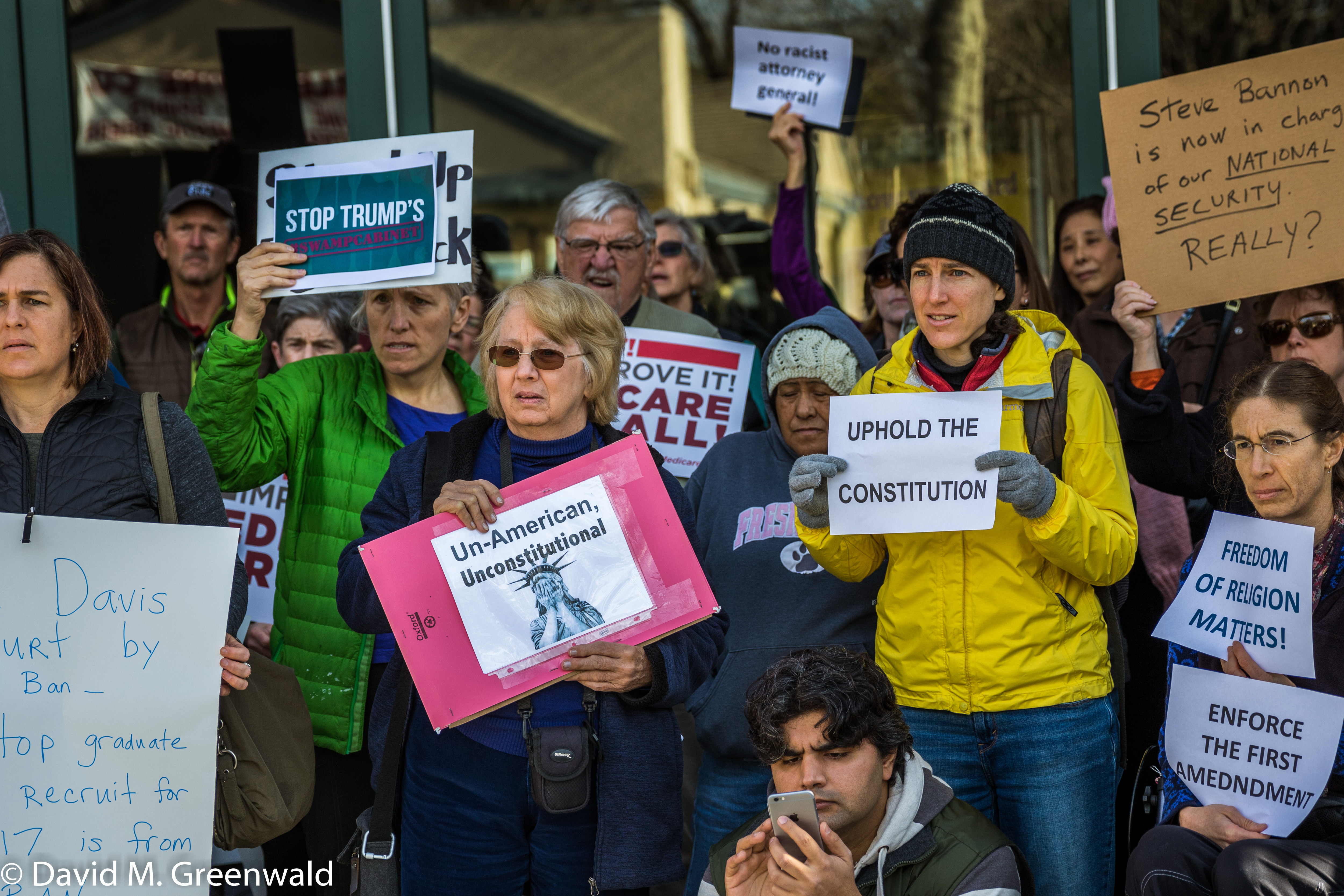 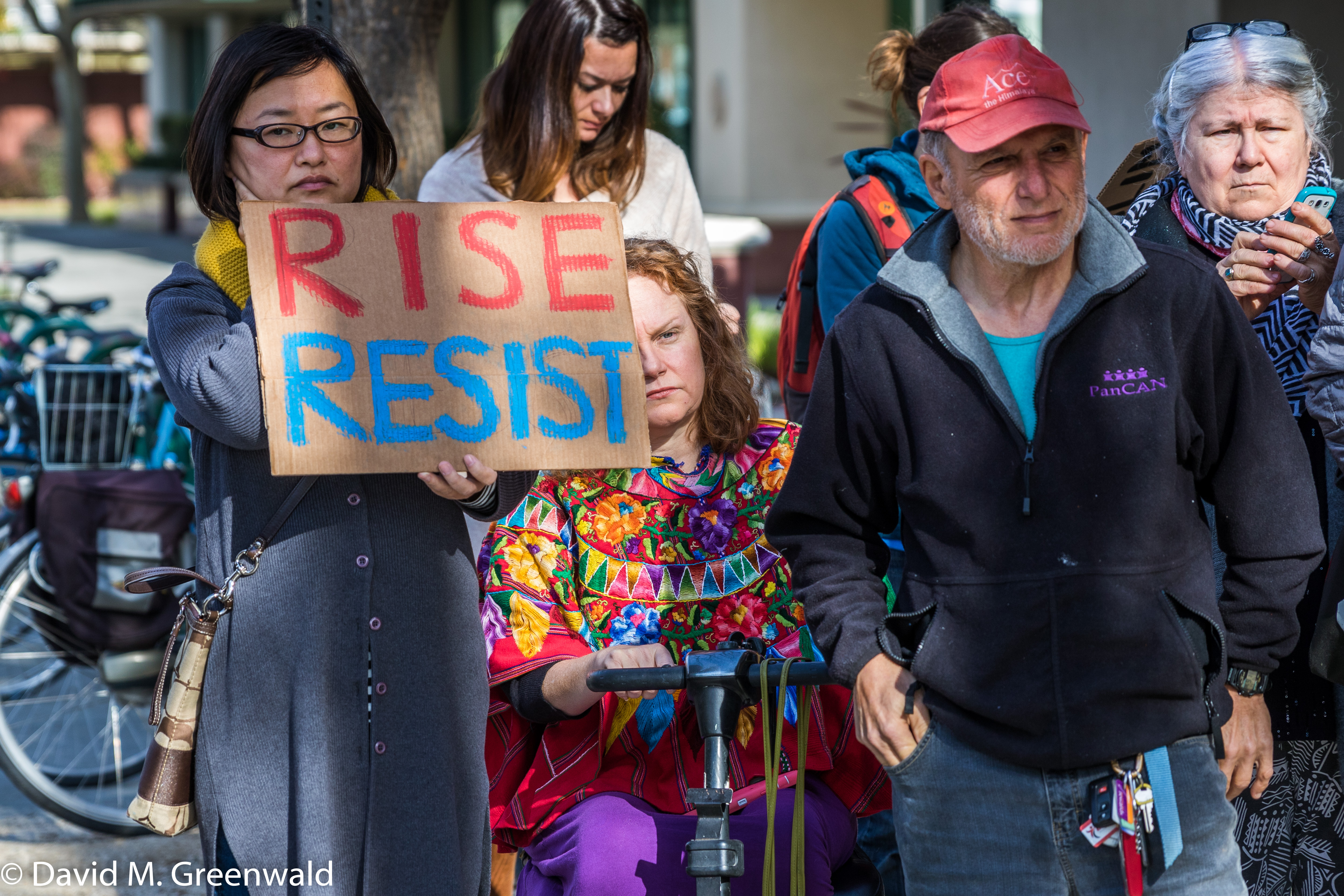 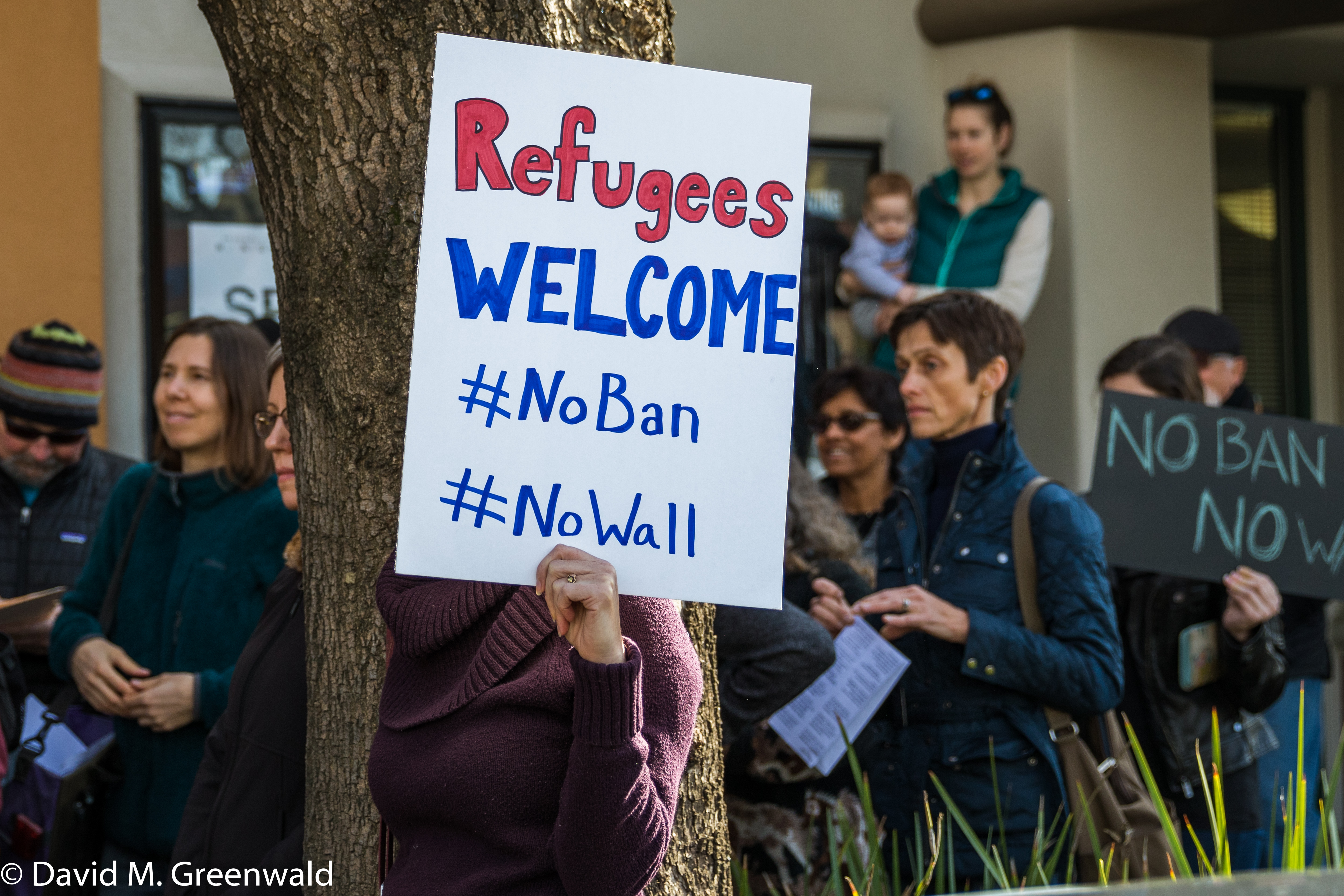 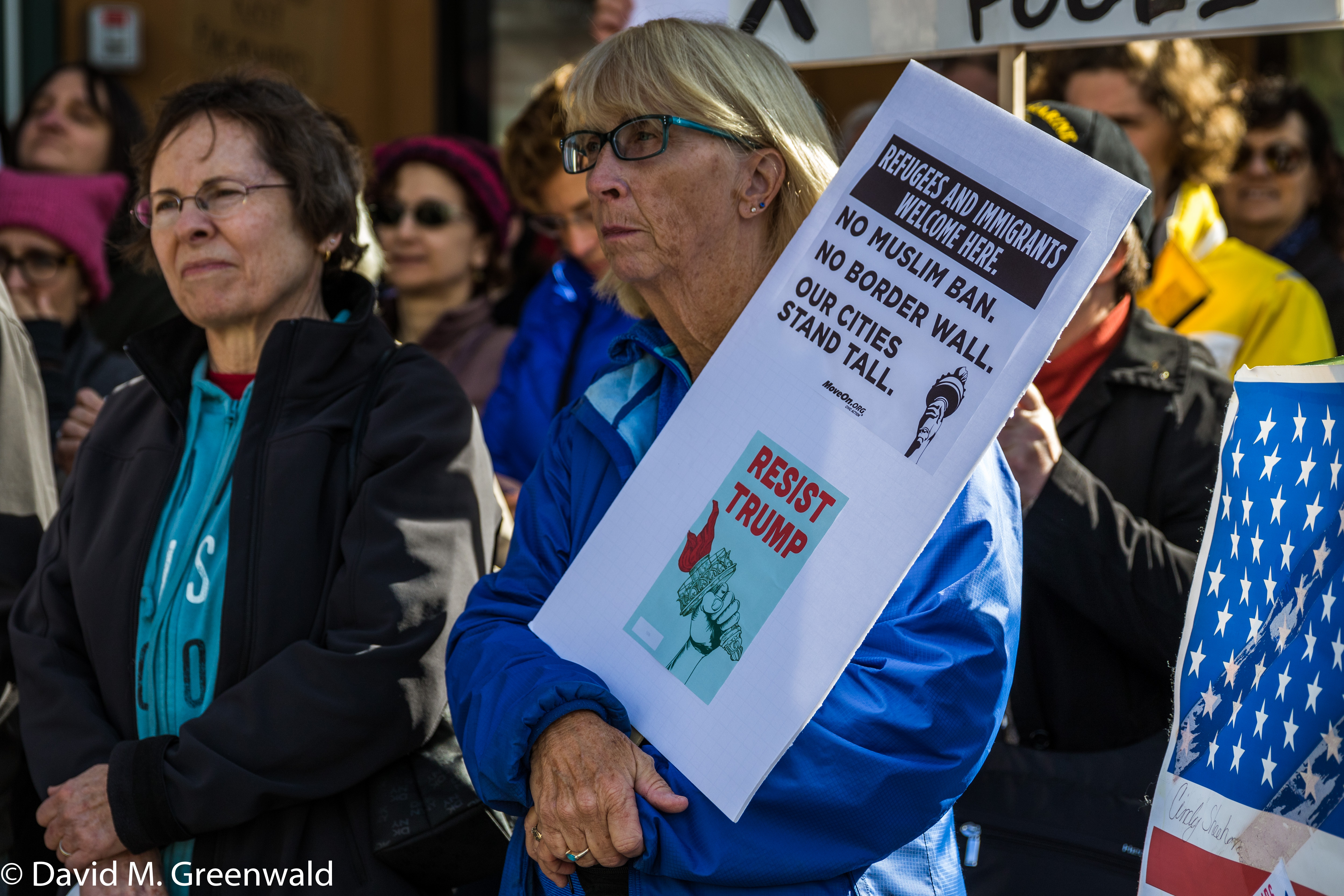 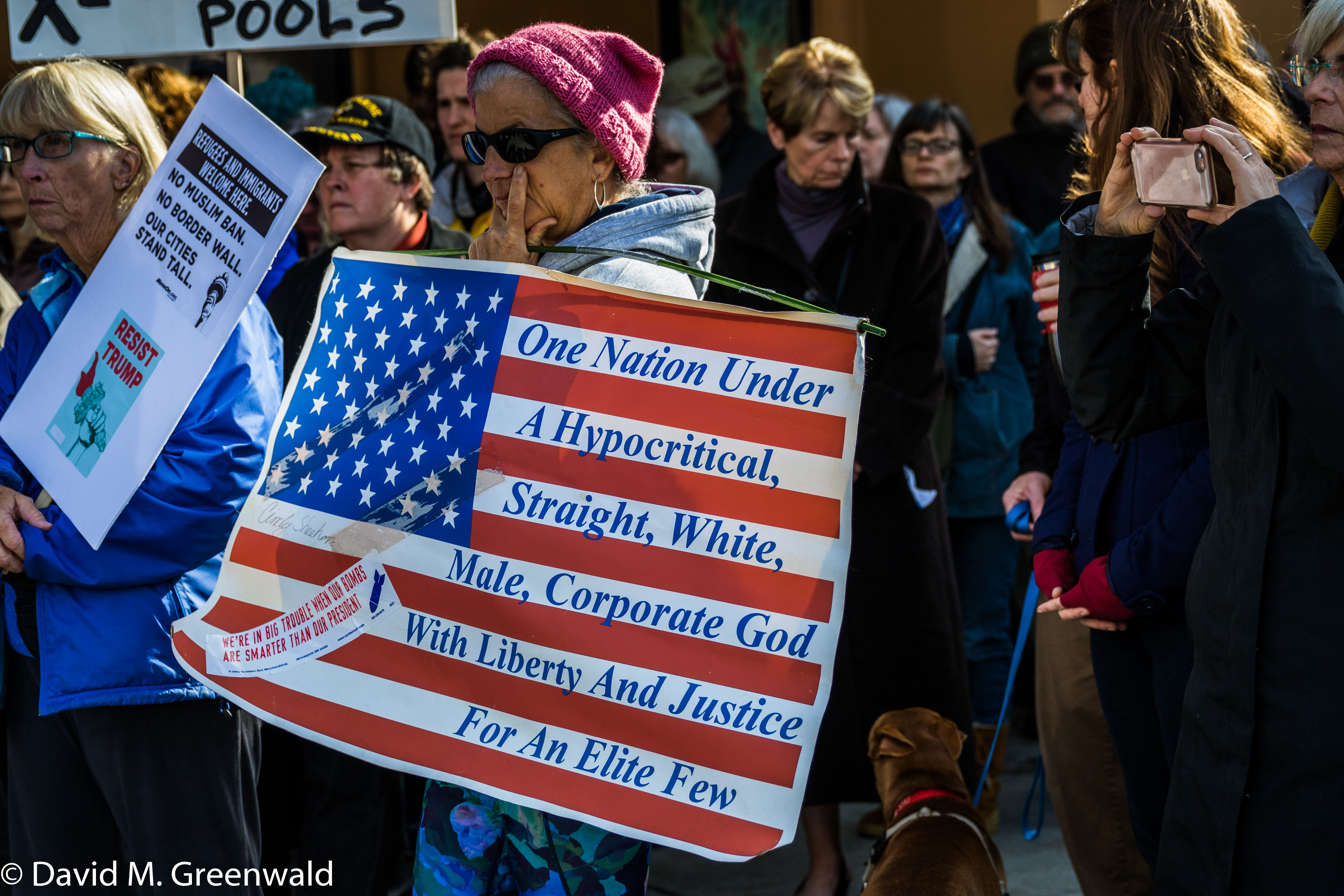