The large number of members of the public filled the room.  Of those who spoke during public comment, not a one came in support of the military vehicle that Sheriff Ed Prieto promised would be used only for defensive purposes, and not at all during protests.

The Board of Supervisors were more evenly split.  Don Saylor put forward a motion to deny the sheriff’s request for the MRAP (Mine Resistant Ambush Protected vehicle).  It would be seconded by Matt Rexroad, but that is where it got interesting.  Oscar Villegas voted straight up against the motion, while Jim Provenza and Duane Chamberlain were not ready to make a decision.

There was a second motion to bring it back on April 25 – that passed 3-2 with Don Saylor and Matt Rexroad dissenting.

That means the supervisors will again have to face a public ready to take a stance against the militarization of police.

The meeting started on a contentious note with a few protesters shouting down the sheriff as he made a presentation, and County Counsel Phil Pogledich threatening to clear the room.

The sheriff during his presentation said he doesn’t think this will cost any money to operate.  He talked to another chief who estimated “the cost will probably be less than $1000 a year.” 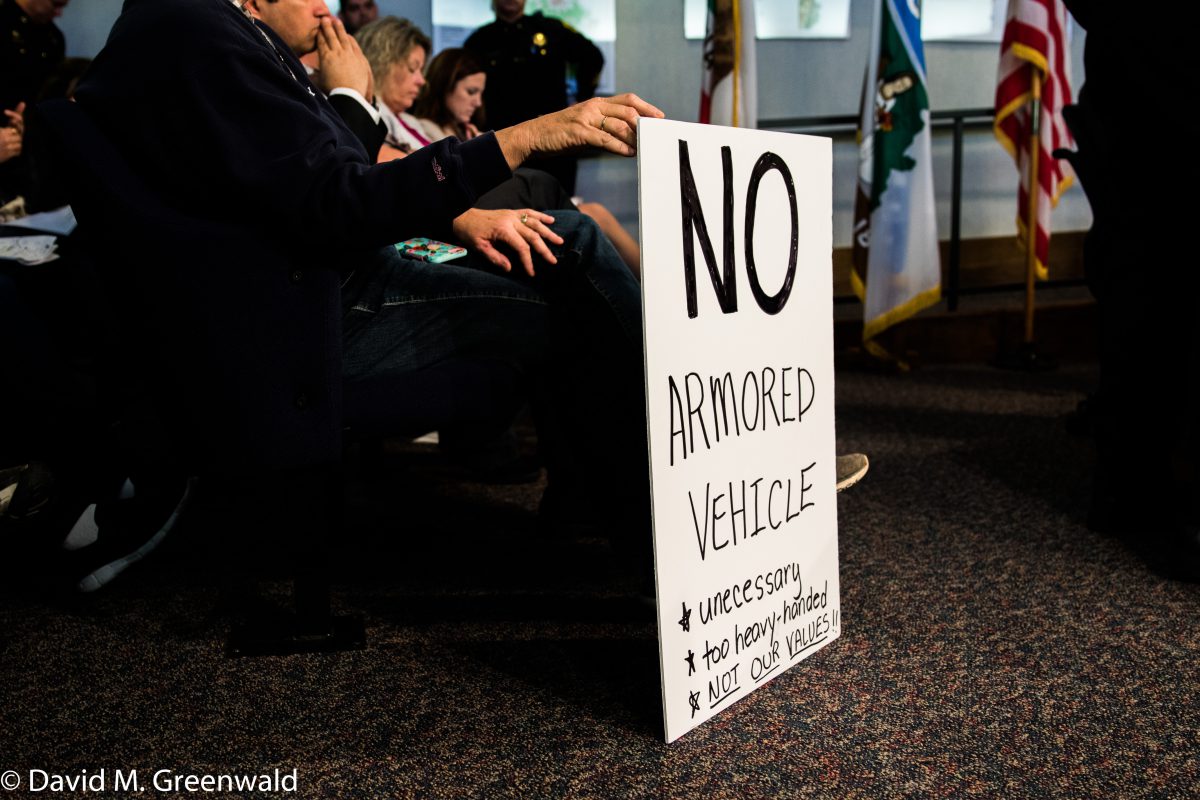 The sheriff said that, while people are focused on this being a military vehicle, the vehicle they are obtaining “is much smaller than the one Woodland has, and West Sacramento,” he said.  “I don’t think the size of the vehicle matters so much as how it is going to be used.  I think my reputation speaks loudly in support of civil rights.”

He said he would absolutely not use the vehicle to oppose protests.  “Nowhere on the list is anything indicating that we’re going to use it for crowd control or opposition to any marches,” he said.

“This is not a political issue,” he said, stating that he believes people have the right to protest and that he has been supportive of some of the movements against the new administration.  “We are doing this strictly for community safety.  That’s the number one stress for us.”

He added, “Our officers are put at harm’s way on a daily basis.”  He pointed to his 48 years in law enforcement, including during riots in LA, and he said, “I can honestly say there’s probably very few people in this crowd, very few people that are opposing this that have been in harm’s way to the level that many of us have been.”

He brought up recent bomb scares.  He also reiterated that he does not work for ICE (Immigration and Customs Enforcement) and, in fact, has refused to cooperate with ICE holds in the past.

During questions, Don Saylor pointed out that on the list was Homeland Security.  Sheriff Prieto said that he was not going to get involved in any Homeland Security issue that involves deportation of undocumented immigrants.

However, during public comment, several commenters noted that Ed Prieto, who is approaching 74 years of age, will not be sheriff forever and, while he may have no intention to use the MRAP in protests or to assist Homeland Security or ICE, that doesn’t mean that the next sheriff won’t have different views on the appropriate use of the vehicle.

A large number of people spoke during public comment.  Here is a 15-minute video clip that captures some of the flavor of those comments:

Supervisor Don Saylor said, “Under any circumstance, I would not be able to move forward without knowing exactly … what the scope of this would be.”  He said, “I do think there are costs associated with this item beyond zero, beyond $1000 a year.”

Mr. Saylor found it “chilling to me,” the description of children wanting to be photographed with the MRAP.  “That does echo some of the public comments of militarization and the way that affects our communities and the impressions that are planted in the minds of children.

He said he would like us to “not escalate the arms race.”  He concluded that he sees “no justification presented that would support my vote to support a third MRAP in Yolo County.”

On the other hand, Supervisor Oscar Villegas had the opposite take.  He said that, while he heard compelling testimony and the discussion was long overdue, “I don’t believe one vehicle will redefine our community’s public safety.  I refuse to believe that. Despite what it may signal to some, I don’t think it will define the conversation going forward.” 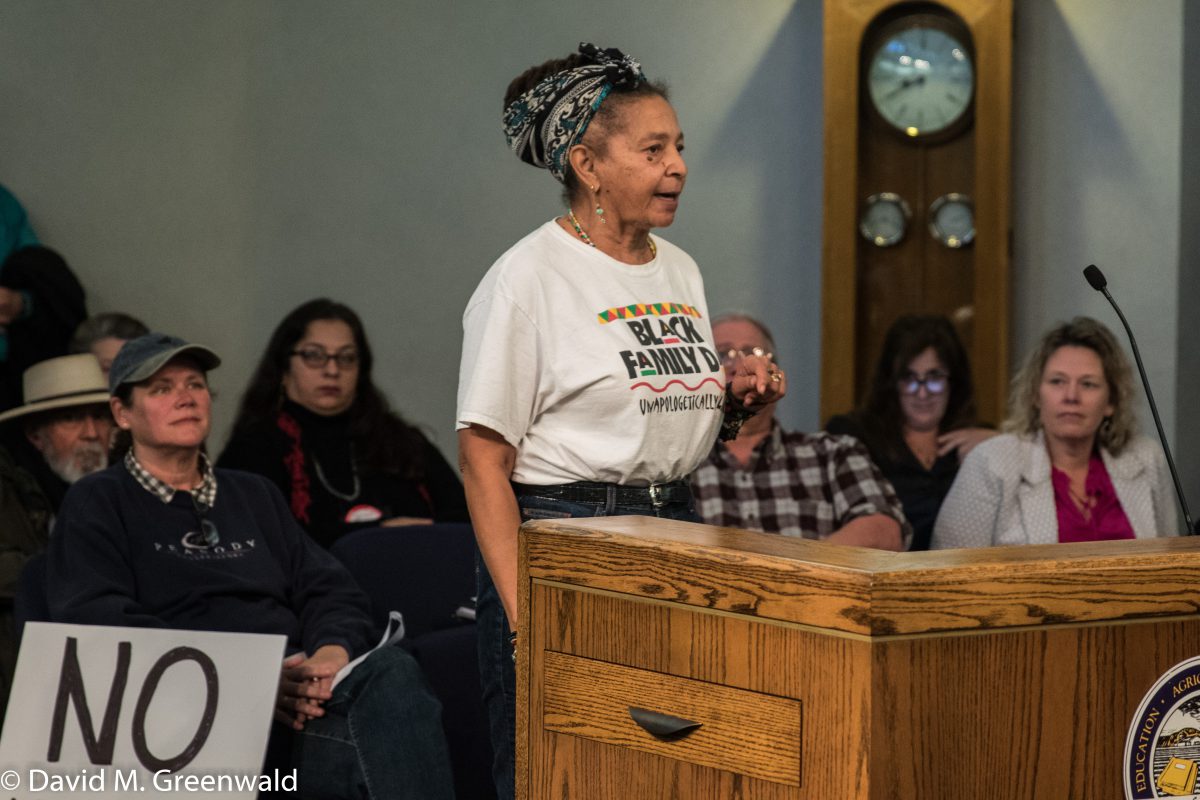 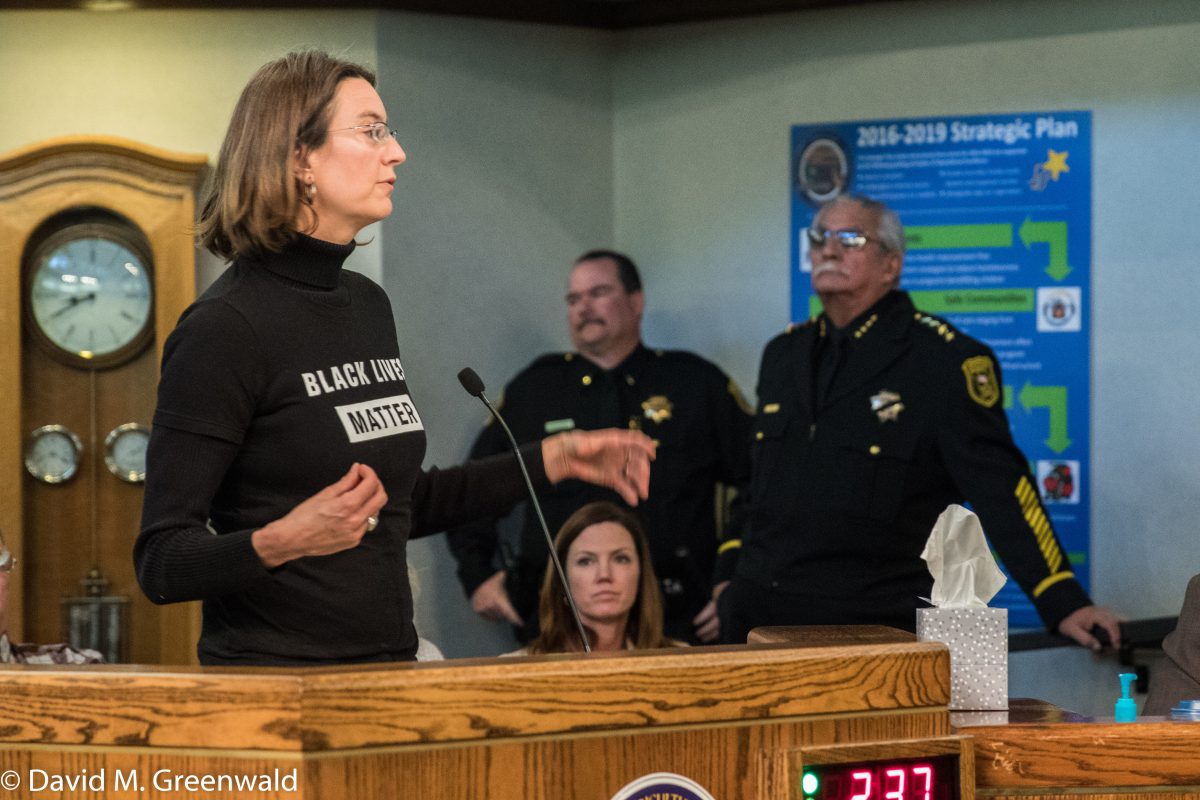 He added, “Our role is not to micromanage a countywide public official who is responsible for the county’s public safety.”

Supervisor Jim Provenza, who would ultimately abstain on the main motion, said, “I’m not ready to vote on this today.”  He said he wanted to see what the costs were and the written protocol that the sheriff was proposing.

“His intended use is a lot different than how people fear it will be used and how it’s been used in other areas,” Supervisor Provenza stated.  He noted that the vast majority of law enforcement never discharge their firearm in the line of duty.  “What’s important is that you have policies and procedures to make sure it’s used properly.

“Lastly, I want to know the need for an extra vehicle,” he said.

Supervisor Matt Rexroad was blunt, stating that he was a firm no on this.  He also raised the point that he did not think this should have been put on consent in the first place.

There was no action taken after the 2-1-2 vote, given that they needed a third vote to act either way.  The motion to bring this back on April 25 passed with a 3-2 vote.

5 thoughts on “Supervisors Deadlock on MRAP, Bring It Back in April”