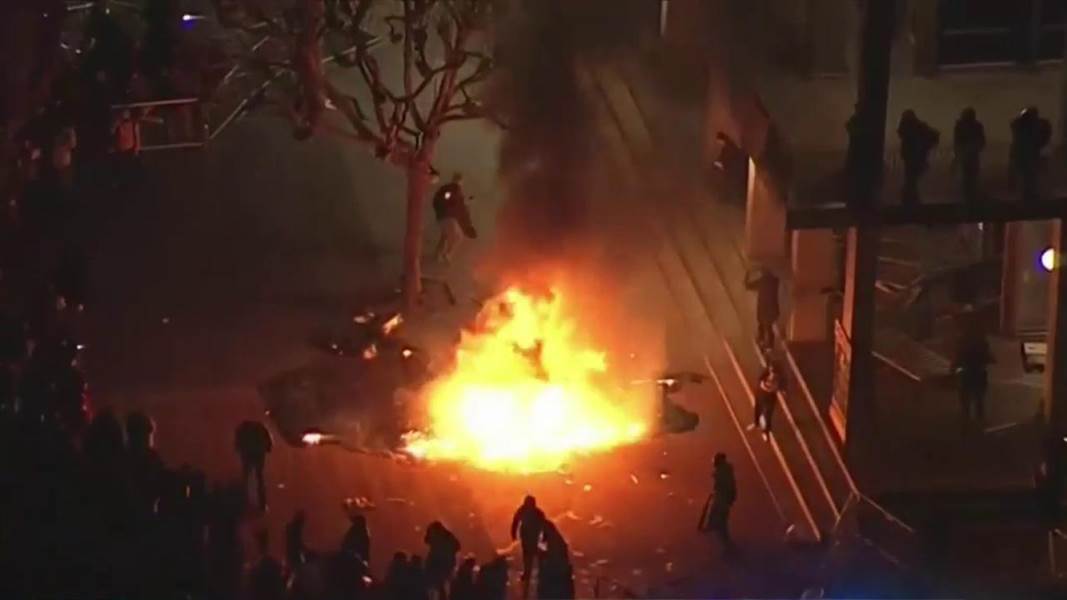 It was bound to happen – if a planned event from Milo Yiannopoulos was going to be cancelled at UC Davis, we knew things would end up far worse at Berkeley.  And while the official word from UC Davis was that protesters removed a barricade before police could react, the scene in Berkeley turned violent – or at least more violent – as there were firebombs, fireworks and a group of people who smashed a metal barricade at the door.

The media made much out of the protesters shutting down free speech and Milo once again issued a self-serving media announcement blaming the cancellations on “violent left-wing protesters.”

“The Left is absolutely terrified of free speech and will do literally anything to shut it down,” Mr. Yiannopoulos said on Facebook after the Berkeley event was canceled.

But what is missing from the coverage is perspective.  An understanding that the problems here, as they were in Davis, were instigated for the most part not by students who were protesting and opposed to Milo’s appearance – and not by the “left” as in the mainstream left – but rather by radical anarchists bent on dismantling the system, not just implementing incremental change.

We see evidence of this in the UC Berkeley statement following the incident earlier this week, “The violence was instigated by a group of about 150 masked agitators who came onto campus and interrupted an otherwise non-violent protest.”

Interestingly enough, the alt-right is well aware of that.  There is the January 17 article in Breitbart itself that noted in advance of the inauguration that “there are also darker forces assembling; a gathering of at least 75 anarchist, socialist and communist groups preparing for an event called #DisruptJ20 that has officially called for violent Black Bloc protesters to gather at 10:00 am on Friday, January 20th in Washington D.C. at the Logan Circle and the Francis Scott Key Memorial.”

The group Antifa, short for groups like the Anti-Facist Coalition, is one of the groups associated with the black masks, which includes camouflage, defensive gear, and offensive gear.

The article in Breitbart notes that “the goal of the Black Bloc and its distinctive dress is to allow protesters to break the law.”

An article on the anarchist site Crimethinc notes, “You may have heard of the notorious Black Bloc, a venerable, if not doddering, anarchist tradition in which a mass of direct action enthusiasts gather, all wearing black clothing and masks, and engage in some level of illegal activity.”

They add:  “When everyone in a group looks the same, it is difficult for the police or others to tell who did what. Most criminal activities are better carried off in a less obvious manner, of course, but there are situations in which it is necessary to step outside the limits in public.”

But no one seems to want to distinguish between the student-oriented protest and the tactics of protesters like Antifa, who are looking to cause trouble.

George Washington Professor Jonathan Turley wrote on his blog this week, “Free speech is being rapidly diminished on our campuses as an ever-widening scope of speech has been declared hate speech or part of the ill-defined ‘microaggression.’ Now Berkeley has shown the world exactly what this intolerance looks like as protesters attacked people, burned property, and rioted to stop other people from hearing the views of a conservative speaker.”

He writes, “As on so many campuses, they succeeded. The speech by Milo Yiannopoulos was cancelled. A triumph of anti-speech protesters. Berkeley now must face a defining moment.”

He argued that “it is liberals who should be on the forefront in denouncing these protests and the effort to stop this event.”  And that Berkeley “needs to bring this speaker back.”

Perhaps so – but unless Berkeley has a way to avoid Antifa and their tactics, bringing him back would be a little like Groundhog’s Day.

Besides, as we have argued again and again, this is what Milo wants.  Milo went to Cal Poly, my alma mater, and at a more conservative school was able to speak.  My friend and classmate posted on Facebook, “Milo Yiannopoulos was so boring and all over the place I just left after an hour.”

He did add, “The police presence was ABSURD. About 100 police in uniform, about 20 in full riot gear, armored personnel carriers, dogs.”

The Vanguard has favored the right of Milo to speak.  We also believe that these protests are actually giving Milo a lot more power and notoriety than he deserves.

This week, CNN did a nine-minute video on Milo, which included interviews and photos from UC Davis.  (Worth watching).

He states his goal is to take on the left-leaning college establishment.

“I just want to burn it down,” Mr. Yiannopoulos said in an interview last month with CNN. “I am speaking on college campuses because education … is really what matters. It’s a crucible where these bad ideas are formed. Bad ideas like … progressive social justice, feminists, Black Lives Matter … that I think is so cancerous and toxic to free expression.”

CNN notes: “His many detractors say he is a hatemonger. But Yiannopoulos believes he offers an important perspective that is missing at universities where liberal ideas typically go unchallenged. And he’s inspiring other far-right speakers to visit college campuses in the hopes of swaying young minds.”

“People are tired of being told how to live, how to speak, what language they can use,” he said. “The strength of feeling in my crowds, the enthusiasm for me from the audiences is the same — the same instinct, the same sort of motivating force (that) put Trump in the White House.”

“[College students] understand that there’s something exciting and dissident and mischievous about this,” he said. “It’s almost cool to be Republican now.”

“What’s new is Donald Trump. There’s somebody on the national stage who’s … helping to encourage and give enthusiasm to this effort to proselytize and go to campuses and get new recruits for a new conservative movement,” said Kevin Johnson.  “We’re a public university, bound by the US Constitution. And we’re not supposed to be censoring speech so it’s not really up to us to say who can say what on campus.”

UC Berkeley Chancellor Nicholas Dirks stated, “In our view, Mr. Yiannopoulos is a troll and provocateur who uses odious behavior in part to ‘entertain,’ but also to deflect any serious engagement with ideas.”

He added that “we are defending the right to free expression at an historic moment for our nation, when this right is once again of paramount importance. In this context, we cannot afford to undermine those rights, and feel a need to make a spirited defense of the principle of tolerance, even when it means we tolerate that which may appear to us as intolerant.”

Here is the problem expressed by a transgender UC Davis Student: “The fear is with the folks who are gonna see him,” she said. “He leaves. But the folks who are attending (his event) are the folks that I have to sit next to in classrooms.”

But by trying to shut down Milo’s talk, the protesters are actually giving him a lot more power than he actually has.  And it makes his point for him.

The problem is that the media is not distinguishing between peaceful protesters and Antifa.

There is a difference between these guys: 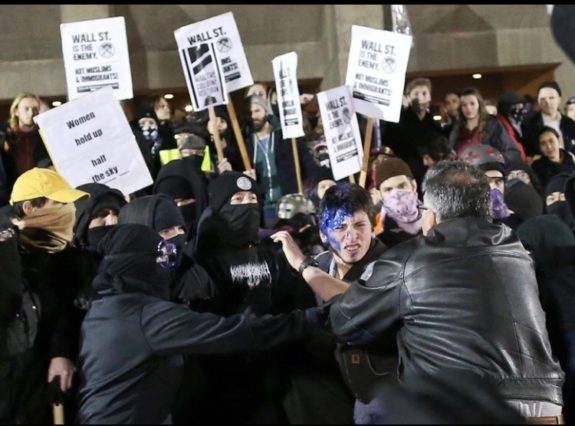 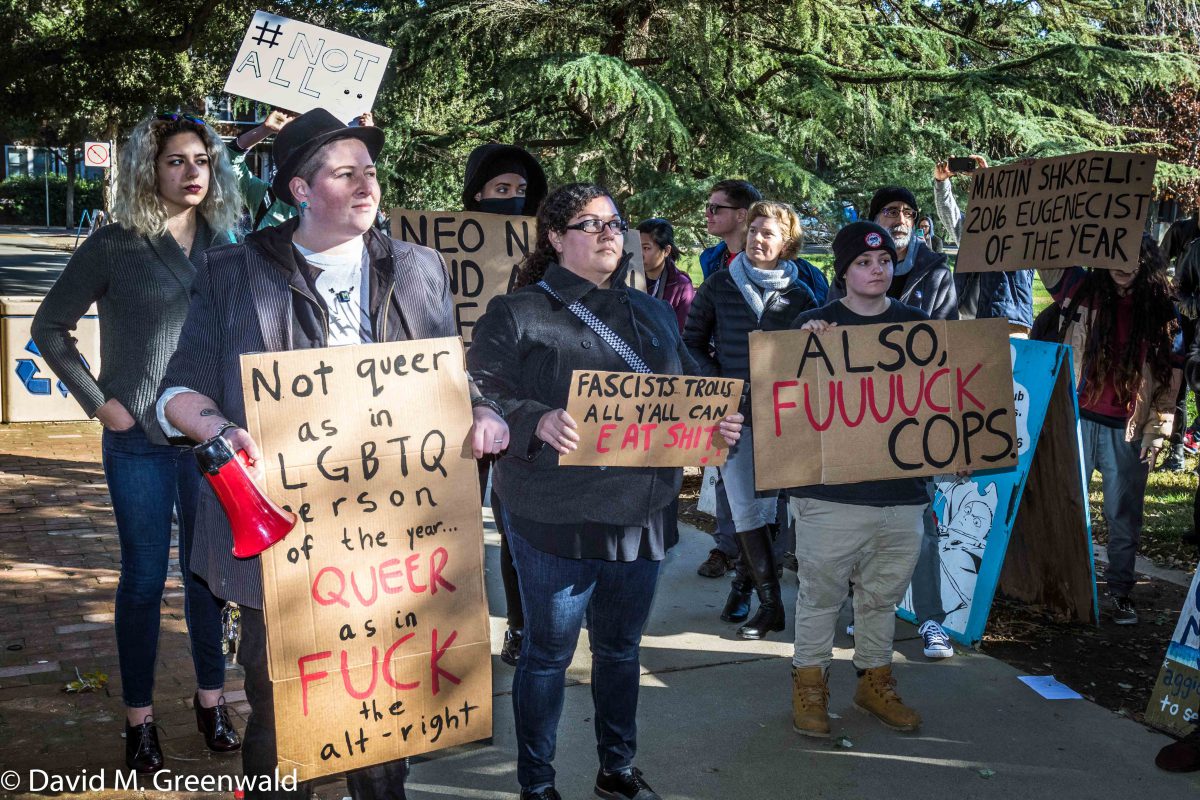 The latter group may have had distasteful signs, but they marched in protest and didn’t provoke or attempt to disrupt Milo’s talk during the Saturday protest.

Antifa not only was responsible for the violent protests in Berkeley, they were the ones who attacked and stabbed white supremacists groups outside of the Capitol in Sacramento last June.

22 thoughts on “My View: Media Reports Need to Distinguish between Student Protesters and Anarchist Groups”