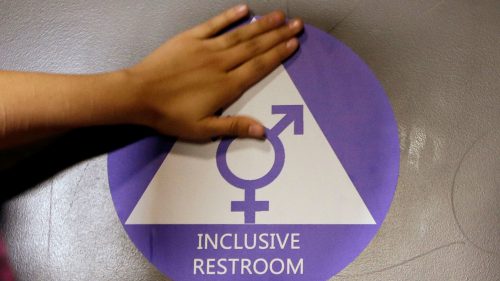 He added, “I urge the Court to strike down ignorant and degrading policies that perpetuate fear and intolerance. Anti-discrimination laws like those adopted in California have enhanced public safety, not detracted from it. Our office will continue to enforce California’s strong antidiscrimination laws regardless of any change in the federal government’s enforcement practices.”

In the brief they argue that allowing transgender people access to common restrooms, consistent with their gender identity, “creates no public safety or personal privacy threat.”

The states argue, “Discrimination on the basis of gender identity causes real and significant harm both to transgender people and to the amici States. Policies that promote tolerance and inclusion of transgender people can reduce that harm. The experience of the amici States and of local governments around the country shows that such policies can confer broad social benefits without compromising personal privacy or requiring significant public expenditures.

“Title IX provides a crucial additional tool for ensuring equality by guaranteeing that transgender people can travel freely across State lines without fearing discrimination by educational institutions receiving federal funds,” the argument continues. “And, contrary to the arguments of petitioner and its amici, enforcing Title IX’s mandate of gender equality in the circumstances of this case does not violate the Spending Clause of the Constitution.”

The argument continues that transgender people, representing perhaps 1.5 million in this country, are an important part of the population and serve our communities in a broad array of roles.  They argue, “Professional psychologists recognize that transgender people have been part of cultures worldwide ‘from antiquity until the present day,’ and that being transgender is natural and not any form of pathology.”

They add, “Being transgender does not in itself inhibit a person’s ability to contribute to society. Unfortunately, however, transgender people are often subject to harsh discrimination that limits their ability to realize their potential.”

The brief further argues that transgender people “face pervasive and harmful discrimination, including by being denied access to common restroom facilities.”  They face hate crimes which “pose a serious and enduring problem for transgender people.”  They argue, “Transgender people have long been subject to murder, assault, and other crimes on account of their gender identity.  Recent data indicate that such incidents continue to occur and, in fact, are on the rise.”

The brief notes that up to 46 percent of transgender students missed at least one day of school within the last month due to feeling unsafe or uncomfortable.

“The harassment experienced by transgender students leads, for many, to absenteeism and trouble graduating. The 2015 NTDS survey [National Transgender Discrimination Survey] revealed that nearly twenty percent of transgender students left a K-12 school because the mistreatment was so severe. A 2015 school survey showed that more than 60% of lesbian, gay, bisexual, and transgender (LGBT) students who did not expect to graduate from high school attributed their academic struggles to a hostile or unsupportive school environment, hostile peers, unsupportive school staff, and gendered school practices. The survey found that three-fourths of transgender students felt unsafe at school because of their gender expression.”

In summary, the amicus brief argues that “data about the experiences of transgender people paint a stark picture. Transgender people experience significant discrimination and harassment, with severe negative consequences for themselves, their schools, their employers, and their communities. The amici States, in turn, are injured in ways this Court aptly summarized a quarter-century ago.

“[A] State’s interests in the health and well-being of its residents extend beyond mere physical interests to economic and commercial interests,” and to an interest in “securing residents from the harmful effects of discrimination. This Court has had too much experience with the political, social, and moral damage of discrimination not to recognize that a State has a substantial interest in assuring its residents that it will act to protect them from these evils.”

Share:
Tags:Attorney GeneralGender Neutral RestroomsTransgenderXavier Becerra
Previous : My View: When Will They Ever Learn?
Next : Guest Commentary: City Should Take an Analytical Approach to Next Tax Measure