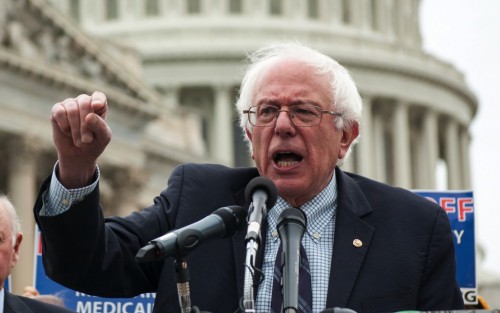 The issue of civility is a theme that has been a recurring one for the Vanguard over the years.  Over time I find the perspective changing here, depending on the circumstances and the backdrop of the times.

I found it very interesting to see the issue raised by Senator Bernie Sanders in a Medium post this week.  He notes that Washington Post columnist Amber Phillips in a post written this week, criticized him “for lowering the state of our political discourse, because I accused the president of being a ‘liar.’”

Here are two key paragraphs from the Senator’s piece which I appreciate, because they are thoughtful and introspective.

First, he writes, “What should a United States senator, or any citizen, do if the president is a liar? Does ignoring this reality benefit the American people? Do we make a bad situation worse by disrespecting the president of the United States? Or do we have an obligation to say that he is a liar to protect America’s standing in the world and people’s trust in our institutions?”

Then he says, “I happen to strongly believe in civil political discourse. The vast majority of people in Congress who hold views different than mine are not liars. It is critical we have strong, fact-based debates on the important issues facing our country and that we respect people who come to different conclusions. In a democracy people will always have honestly held different points of view.”

Finally he writes, “But how does one respond to a president who has complete disregard for reality and who makes assertions heard by billions of people around the world that have no basis in fact?”

This is a real dilemma.  On the one hand, if we were in a situation with a libel claim, truth is considered an absolute defense.  I can’t defame you by calling you a liar if you are in fact repeatedly telling lies.

But, at the same time, there are alternatives to using invective names – even if they are accurate.

This gets to some points I made in my Tuesday column on the media.  As I argued on Tuesday, the media really, from day one covering Donald Trump, has gotten it wrong.  The same can be said for other politicians who are used to having very different ground rules.

The media is covering President Trump in the wrong way by trying to ask complicated questions and trip him up.  Then they analyze the situation by whipping out their trusty fact-check reports that no one cares about to rate the truthfulness of the talk.  The reality is this – Trump’s supporters don’t care if he’s lying.  Trump’s critics know he’s lying and don’t care if he’s telling the truth.  And the people in the middle aren’t reading the fact-checking reports anyway.

So if Senator Sanders gets up and calls President Trump a liar – his supporters will cheer him on, Trump’s supporters will dismiss him as a socialist, and those in the middle are not paying attention.

Meanwhile, Bernie Sanders has lowered himself and sunk himself in the mud – thus confirming to the cynics that there really is no difference between Donald Trump and Bernie Sanders and all the other politicians.

We don’t win this game.  Dragging down discourse and trying to expose what no one really cares about isn’t going to change things.

So what should we do?

The biggest mistake in the flawed presidential campaign that Hillary Clinton ran is that she lost track of what made Bernie Sanders, the challenger, so compelling to so many people.  She focused on attacking Donald Trump.

The reality is that Bernie Sanders gained headway not because he attacked the system, but because he offered an alternative to the system – and so, if he wants to change the system now, attacking Trump as a liar is not the answer.

Instead, Bernie Sanders and others should correct the record.  You don’t have to call someone a liar, you can simply show them to be inaccurate by correcting the facts.

But that should be quick and short and to the point.

Then he and others should offer the alternative vision.

This is a challenge.  Bernie Sanders goes on to note legitimate concerns when Trump says “three to five million people voted illegally in the last election.”  Mr. Sanders argues, “This is a preposterous and dangerous allegation which intentionally opens the floodgates for an increase in voter suppression efforts.”

Amber Phillips herself previously wrote, “There is just no evidence of voter fraud. Why launch an investigation into something that nearly everyone in U.S. politics — save one notable exception — doesn’t believe warrants an investigation?”

But calling Trump a liar here undermines Mr. Sanders’ own message and his own standing.  And many of the “lies” by Trump are more trivial.  For instance, Mr. Sanders writes, “Trump claimed that his victory ‘was the biggest electoral college win since Ronald Reagan.’ Anyone with access to Google could see that this is factually incorrect. George H.W. Bush, Bill Clinton and Barack Obama all had bigger electoral margins of victory than Trump.”

The first has implications, the second doesn’t.  Senator Sanders acknowledges that “there are the trivial lies.”

The biggest danger I see in the Trump presidency is that inappropriate behavior will be normalized and meanness and nastiness becomes acceptable.  But unfortunately, diving into the pool and playing the same game is not the answer.

I know a lot of people who believe that President Trump will quickly implode, but I think the last two years shows that he’s even more formidable than many people fear.

10 thoughts on “Commentary: How Do We Maintain Civility in Contentious Times?”