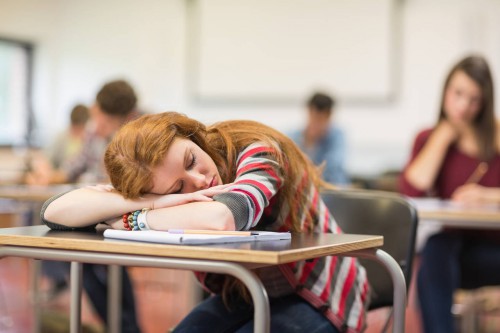 In the last few years, the Davis School District has been looking into ways to start classes later, following “an abundance of compelling research that supports the delaying of school start times.”

The findings suggest that teens change biologically “in such a way that they cannot fall asleep as early as they did when they were younger, but they continue to need more sleep than adults.”  Studies show that teens need 8.5 to 9.5 hours of sleep, but get about 7.6 hours of sleep on average.

Moreover, they find that inadequate sleep negatively impacts important brain functions essential to learning processes, while it is also associated with higher rates of obesity and depression, lower levels of motivation and attentiveness, and increased rates of traffic accidents.

The district has sent out a notice that they are adjusting their schedule to address these concerns following the school board’s vote that “instructed the Superintendent to make secondary school start times later, while continuing to promote the education of parents, students, staff and the community regarding the importance of sleep for teens and the factors that affect the quality and duration of teenage sleep.”

However, as a letter writer in the paper points out, “The problem is that the research links they sent out uniformly stress that students need a start time of no earlier than 9 a.m., or even 10 a.m., and that under no circumstances should school start before 8:30 as students need to sleep until at least 8 a.m. every day.”

The letter writer here is not completely accurate.

That article actually notes that the Fairfax (Virginia) school board “approved a recommendation for starting high schools later, between 8 and 8:10 a.m. and ending between 2:45 and 2:55 p.m.”

The research by the CDC and US Department of Education noted, “Schools that have a start time of 8:30 AM or later allow adolescent students the opportunity to get the recommended amount of sleep on school nights: about 8.5 to 9.5 hours.”

The CDC (Centers for Disease Control) also notes, “In 2014, the American Academy of Pediatrics issued a policy statement urging middle and high schools to modify start times to no earlier than 8:30 AM to aid students in getting sufficient sleep to improve their overall health. School start time policies are not determined at the federal or state level, but at the district or individual school level. Future studies may determine whether this recommendation results in later school start times.”

So the link cited by the letter writer does not back up their point that research uniformly stresses that students need a start time of no earlier than 9 am.

The article by Paul Kelley and Clark Lee, “Later School Start Times in Adolescence: Time for Change,” makes reference to these times.

They write, “While start times are typically set at the local level, leaders can help raise awareness of the overwhelming evidence that later starts are beneficial.”  They write, “The current context is one in which there is a growing pressure to change to later start times for adolescent students.

“Of particular note is the House Concurrent Resolution calling for secondary schools to begin the school day no earlier than 9 a.m. Already, schools in the United Kingdom and New Zealand start at 10 a.m. or later for older adolescents, with strong positive impacts on achievement and behaviors. Many colleges already start at these times both in the United States and internationally.”

The authors note, “The cost of implementing policies related to later start times is negligible. Later school start times can improve learning and reduce health risks. It is a change that is in the best interests of our students, families, communities and nation.”

That is a far cry from stating that the research uniformly stresses that students need a start time of no earlier than 9 am.

The letter writer not only overstates the conclusion of the research, but also ignores that there are several factors to be balanced.

Wednesdays are crazy days in the district.  We have three kids in school right now – one in TK (transitional kindergarten), one in 1st grade, and one in 7th grade.  On Wednesday, our TK student has to go in the morning (normally he’s in the afternoon class) which means he goes from 8:30 until 11:45.  Our first grader goes from 8:30 until 1:30.  And our 7th grader starts at 9:45 (his late start day) and then goes until his normal exit time.

How are working people supposed to deal with that kind of schedule?  And that’s the problem setting up a later start – a lot of students still have to be dropped off at school around 8 am because their parents work.

The other practical consideration is that something has to give – a later start either means fewer courses or a later ending.  Neither are necessarily good things.  A later ending impacts extra-curricular activities and pushes homework later into the day.

Bottom line, it is easy to get worked up about what the ideal start time is for schools, and it appears that moving it toward 8:30 is beneficial, but there are other considerations here.