Yesterday’s article presented new evidence of air quality concerns near freeways.  During the Measure R campaign, Thomas Cahill, a respected Professor Emeritus and an expert on air quality, expressed concerns about “the viability of the Nishi property for residential use.”

However, he believed that Nishi could work for commercial uses.  We have long believed that, while Davis is in need of additional housing for students, the best use of Nishi might be as a purely commercial, innovation space.

With a new chancellor coming in from Georgia Tech, we note that we have previously pushed the idea for a World Food Center on the Mace Ranch Innovation Center (MRIC) site.  However, we should also consider revising the idea of a UC Davis Village in the style of the now nearly complete USC Village.

One of our readers happened to be down in Los Angeles recently and snapped a few photos of the nearly complete center.  They reported “it doesn’t seem massive nor tall, and feels very human scale. Would have been awesome at Nishi.”

Given that there is no project at Nishi and given the need for economic development and the potential difficulties of residential development on the site – our question is why not reconsider such a proposal for Nishi?

The amazing thing is that Nishi is actually three times larger than the USC Village site.  USC Village is only 15 acres, but on that property USC envisioned 1.25 million square feet of retail in addition to housing 2700 students a year.

A report that came out yesterday showed the economic impact of USC on the LA region – about $8 billion. That’s actually similar to a report from earlier this year, that “UC Davis is a powerful economic engine for California, generating $8.1 billion in statewide economic activity and supporting 72,000 jobs. The Multiplier Effect. In addition to direct spending, UC Davis generates an estimated $3.1 billion and 23,000 jobs through a ripple effect.”

In the report from USC, they note “later this year, the $700 million USC Village opens directly north of the University Park Campus. The massive retail and residential project will enhance campus life for students while opening up an array of new options for the neighborhood.” 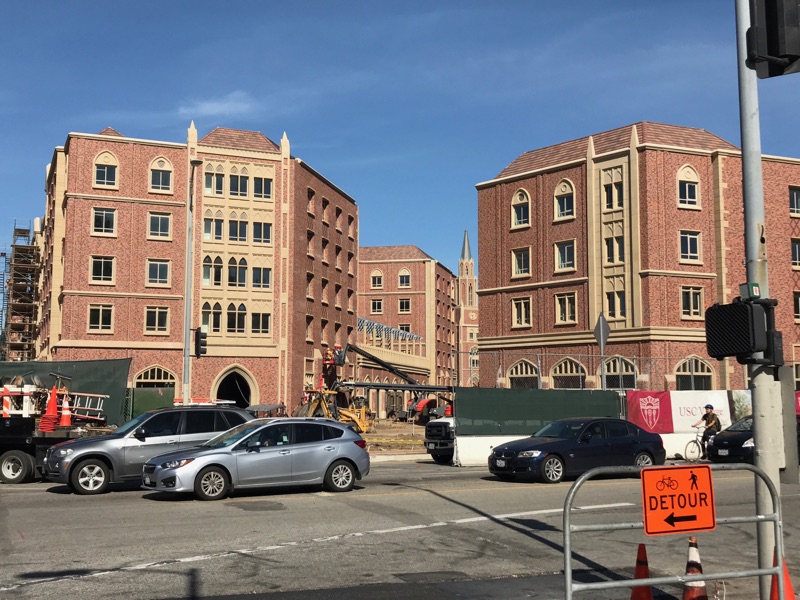 That is certainly not what we would be looking for at a UC Davis Village.  But having shops and restaurants within the city would be to its advantage.  Imagine a promenade on Nishi where restaurants and small retail shops could encourage faculty, staff and students to eat lunch in the city, thereby putting sales tax into the community with the easy convenience of a quick walk.

Imagine university research spinning off startups that can occupy 1.25 million square feet of R&D space, injecting life into the community and the region.

Estimates of the World Food Center are that it could be a multi-billion dollar facility – and it could end up in Sacramento which would certainly benefit the region, but not our local coffers.  I think MRIC is a better location than Nishi for the World Food Center, as it would be surrounded by agricultural land that could serve as experimental fields.  But at Nishi with city-university-private partnerships and cooperations, we can think big – far bigger than a small scale housing project with 300,000 square feet of R&D space right across from a world class university.

USC and Los Angeles city planners are projecting that the 15-acre project will pump $5.2 billion into the local economy.

Think about that – a 15-acre site that USC thinks could pump $5.2 billion into the local economy. We have a 44-acre Nishi property.

In September, Chamber President Jason Taormino wrote that “we need 10,000 new high-paying jobs in Davis. We need to increase our commercial space from 1.75 million square feet to 4 million in order to achieve this goal.”

So perhaps Mr. Taormino should take a look at this.  There is an article from March 8, “Ramping up for August opening, USC Village recruits local jobseekers.”

The article notes that there were jobseekers lined up around the block for interviews and information.

“USC Village, the mixed-used residential and retail complex, is on schedule to open for the beginning of the 2017-18 academic year. The massive project will house 2,700 students and contain 100,000 square feet of retail space, presenting new job opportunities both at USC and with individual retailers,” the article notes.

More than 1000 resumes were submitted in advance, and they note, “Throughout the course of the five-hour event, 1,500 applicants were interviewed for job openings in customer service, maintenance, building services management, custodial services and other permanent, USC Village-related positions.”

Can you imagine what the 44-acre Nishi project could generate if we did a mix of restaurants, retail and R&D space?

The beauty of it would be contained within a small space next to campus that is underutilized now, but could become the driver for jobs and massive economic development without blowing the city’s borders.

Combine that with the activity at the University Research Park and Area 52 and Davis could have its own research hub and innovation center.

With a new chancellor coming on board in August, now is the time to set things in motion and to start to think big again.

16 thoughts on “Commentary: Time is Now to Think Big on a UC Davis Village”