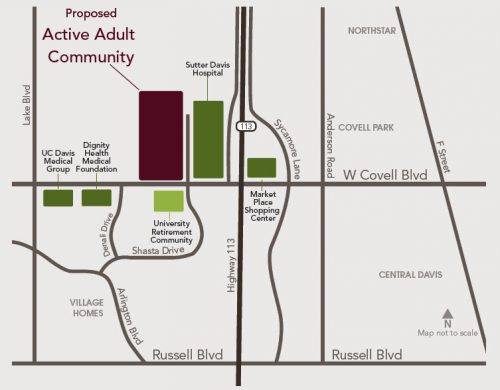 As the latest Measure R project moves forward, one of the key questions is whether the community is ready to support any project outside of the current city boundaries.  The West Davis Active Adult Community represents a different type of project, located on 75 acres in the area on the north side of Covell and west of the Sutter-Davis Hospital.

The project’s 80 percent of its units, including 150 affordable senior apartments, are age-restricted to 55 and over.  They have another 325 for-sale units which are single-story, single-family detached.  The remaining 20 percent of the homes will not be age restricted, as the developers are hoping to “maintain an atmosphere and energy similar to traditional Davis neighborhoods.”

The plan also calls for a three-acre Activity and Wellness Center, which would include a pool, restaurant, and outdoor patio and parking lot.  There is also a three-acre parcel reserved for the University Retirement Community expansion.

The developers are taking a public approach, in addition to presentations before commissions, including this past Monday at a Natural Resources Commission workshop, as they are planning on holding 44 outreach meetings with neighbors across the community.

The project, while well received by a number of people in the community, nevertheless will likely have at least one point of contention – the decision by the developers to forgo a Tentative Site Map until after the Measure R vote.

Developer Dave Taormino explained to the Vanguard that they went back to the original language of Measure J, he said, having followed the other projects that went to Measure J/Measure R votes, “I was surprised when I read the law… that they were not following what the law called for.”

The key requirement under Measure R is the “baseline project features” that “cannot be eliminated, significantly modified or reduced without subsequent voter approval.”

“That’s what the law says,” Mr. Taormino explained.  “What has been happening in the past is they’ve done essentially a tentative map.”

He believes by doing so, “They spent unreasonable amounts on times on things that the public isn’t really interested in.”  Examples include how deep are the pipes, how wide is something, how narrow is something else.  “Those become essentially the construction – that’s not what Measure R calls for.  That’s an entirely different process.” 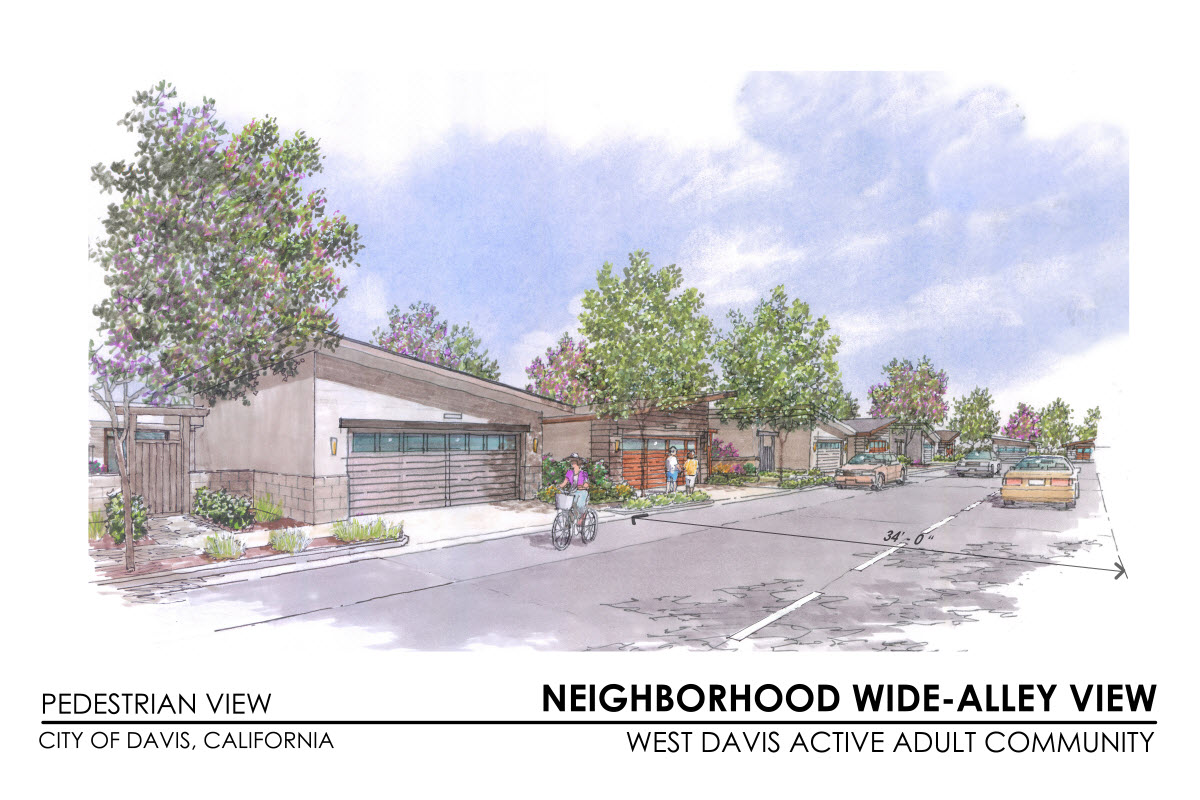 What Measure R does call for is “direct citizen participation in land use decisions…”  He said, “This is (direct) democracy, this is not representative government.”

Previously, he believed, there wasn’t direct citizen participation in the failed Measure R project – “there was an election at the end.”  Instead, he believes that in the land use project, direct citizen participation means going to the people, which is what they are planning to do.  “We are going neighborhood by neighborhood, explaining what we are up to.”

Dave Taormino explained that they are proposing a two-step process.  The first step is the Measure R process.  They will go through all the commissions as they would normally go through.  But they are not doing Site Map specific details.

“At the end of the process, if the citizens vote in favor of it, then we come back again and now we go through the tentative map process,” he explained.  He believes it will save money from the perspective of the developers and “it saves a gigantic amount of time for the staff and city council.”

“If they vote no, then you don’t have to waste all this time,” he explained.  “It’s dividing the process in two steps which really is what Measure R calls for.”

Mr. Taormino’s position is that the law does not require a Tentative Map prior to a Measure R vote.  He said, “No one has told us that we’re wrong on this.  It’s really not skirting the process, it’s extending the process into a somewhat longer process because we have to go through it twice.”

Mike Webb, Davis Director of Community Development, stated “Measure R does not preclude that.”  He agrees that Measure R requires project baseline features that must be defined and cannot be changed without a subsequent vote.  The basic land uses must be laid out.  “At least a conceptual plan needs to be on the table,” he said.

“Measure R does not require that there be a tentative map and it doesn’t require that there be things like (a) Development agreement,” he explained in a phone interview with the Vanguard.  “Although historically, those are components that we have seen that level of detail be presented as part of a package to the voters.” 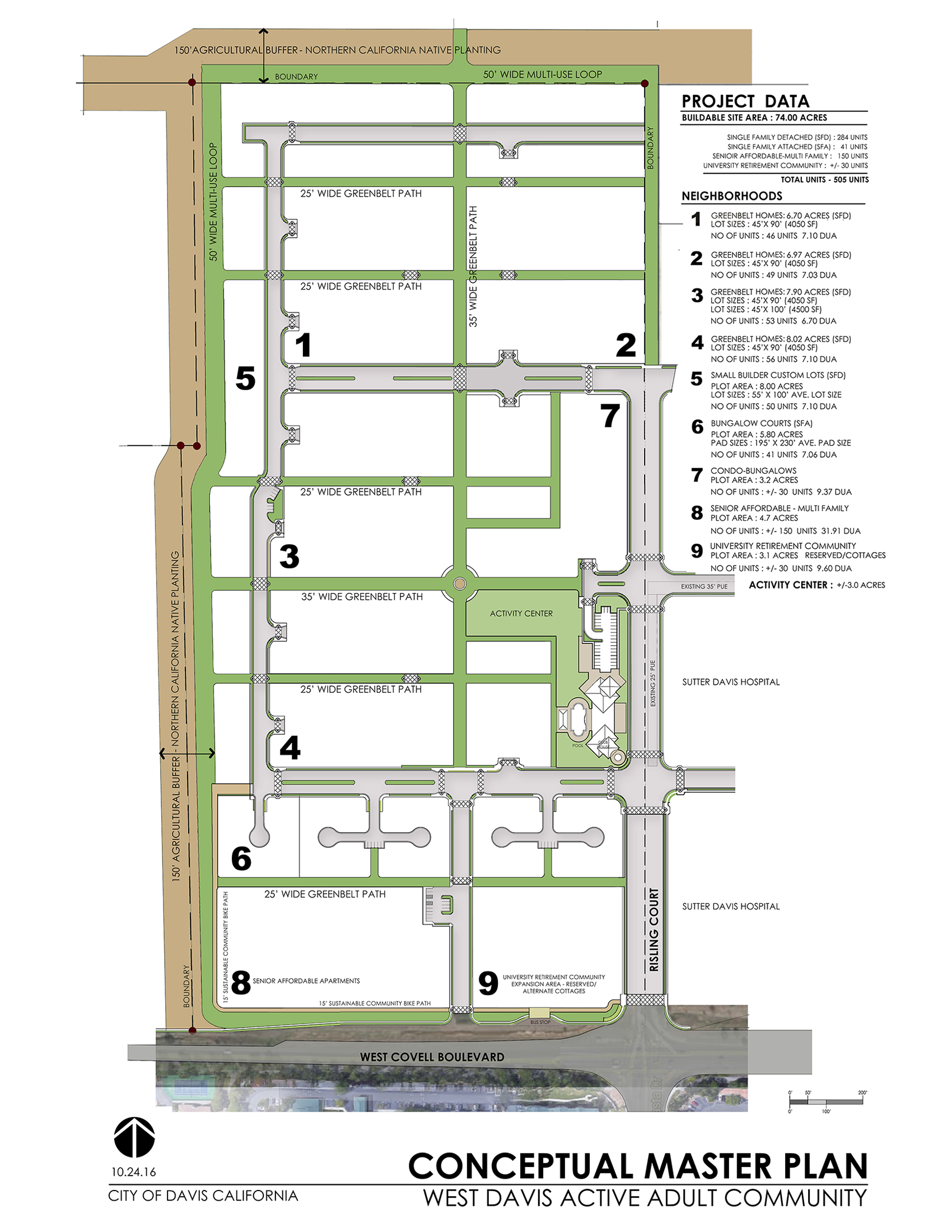 He explained, “The distinction is what’s in the letter of the code when it comes to Measure J/Measure R and what voter expectations are.  I think the applicant is looking to say are there components of the process that could reasonably come after the Measure R vote outcome including a Tentative Map.”

Bottom line, he said, “It’s not required of Measure J, the question is whether the voters will go for it.  If there’s not that level of information, is there enough other information that they feel they have a good understanding of what it is they are voting on?”

Mr. Webb agreed that the baseline features provide quite a bit of detail.  He explained, “The intent under Measure J/Measure R is that you want to define things well enough so that the voters understand what it is that is before them.”

The baseline features, he said, attempt to “strike the balance so that the voters have enough information to act on at the ballot box and perhaps not so much information that the project gets hamstrung by needing to move a property line six inches one way or another and having to have a vote to change that.”

He said there needs to be a strong enough conceptual map even if “they are not tentative map precise.”

Mike Webb also explained that, from the applicant’s standpoint, there is a fair amount of work that goes into a Tentative Map.  From the city’s standpoint, “there’s not a whole heckuva lot in going in and reviewing it.

“It does go through a public process to be reviewed,” he said, including with the Planning Commission.

There is a problem with “optics,” and the process of avoiding a step until after the vote is likely to bring in the charge of “bait and switch” – although the language in the baseline features is binding enough that any significant change would trigger a new vote requirement.

Mr. Taormino believes that the Tentative Map requirements are on things that are “irrelevant” to the concerns of most citizens.  “It’s not relevant to their decision,” he said.  “The citizens are concerned about the land use decision – what is it, what is going to be built there, how many units?  What are the impacts environmentally or financially?”

“We have had two public meetings so far – no one wants to know where its located, they want to know what’s in it,” he explained.

In the meantime, Dave Taormino explained that they plan to get well beyond normal city noticing requirements to meet with everyone in the community on a neighborhood by neighborhood basis.

“We have identified that there are 44 neighborhoods in Davis and it means that we are having meetings with every neighborhood,” he said.  The noticing is delivered door-to-door.  On Friday afternoon the people get a delivery with an invitation and a brochure.  They get the weekend to read it and the meeting is on Wednesday.

At the meeting the developers are presenting their project in about 30 minutes, and there has been about an hour and fifteen minutes of questions.

“What I find very interesting is that the questions (from) the citizens so far and their understanding is in far more detail than the commissions,” he said.

Mr. Taormino said they are doing much more community outreach than typical in the development process.  He explained, “While I wasn’t a fan of Measure R, it is the law of the land, I’m embracing it.  I’m doing exactly what it calls for.”

He said that Measure R is “not just an election, up or down.  That’s not what this calls for.  It calls for citizen participation.”

Mr. Taormino believes that is exactly what they are doing with this project.  The question is whether the voters will see it the same way.