Despite recent changes to Trump’s health care proposal, a vote was postponed on Thursday, which left the bill with an uncertain future.

President Trump tried to leverage House Republicans, stating that he would agree to no more changes.  He warned – pass the bill on Friday, or lose any chance of repealing the Affordable Care Act.

Meanwhile, the Congressional Budget Office’s analysis on the changes, aimed at securing votes to gain passage, showed that the changes would result in half the government savings but with the same level of un-insurance rates that had previously been projected.

CBO estimates found that the new health care law would reduce deficits by $150 billion over the next decade, but the reduction results in 55 percent less savings compared with the previous draft, where the CBO had an estimated $337 billion reduction.

“The ways in which federal agencies, states, insurers, employers, individuals, doctors, hospitals, and other affected parties would respond to the changes made by the legislation are all difficult to predict, so the estimates in this report are uncertain. But CBO and JCT have endeavored to develop estimates that are in the middle of the distribution of potential outcomes.”

Comparison With the Previous Estimate

“On March, 13, 2017, CBO and JCT estimated that enacting the reconciliation recommendations of the House Committee on Ways and Means and the House Committee on Energy and Commerce (which were combined into H.R. 1628) would yield a net reduction in federal deficits of $337 billion over the 2017-2026 period. CBO estimates that enacting H.R. 1628, with the proposed amendments, would save $186 billion less over that period. That reduction in savings stems primarily from changes to H.R. 1628 that modify provisions affecting the Internal Revenue Code and the Medicaid program.

“Compared with the previous version of the legislation, H.R. 1628, with the proposed amendments, would have similar effects on health insurance coverage: Estimates differ by no more than half a million people in any category in any year over the next decade. (Some differences may appear larger because of rounding.) For example, the decline in Medicaid coverage after 2020 would be smaller than in the previous estimate, mainly because of states’ responses to the faster growth in the per capita allotments for aged, blind, and disabled enrollees—but other changes in Medicaid would offset some of those effects.”

Senator Lara stated, “Healthy California gives everyone insurance, because everyone has a right to health care. Trump and the Republicans don’t get to pick the health care winners and losers, and we’ll never get to 100% health care in California unless we lead.”

Senator Atkins added, “Access to affordable and quality health care is not only critical, it should be a right for everyone in California. In light of threats to the Affordable Care Act, it’s important that we look at all options to maintain and expand access to health care. The Healthy California Act is an essential part of that conversation.”

Senator Lara has been critical of the Republican proposal to repeal the Affordable Care Act: “Speaker Paul Ryan’s plan to shred the Affordable Care Act is a hard-right wish list that will cover fewer people and cost more, and a huge step backward from our goal of universal healthcare. We need a way to cover the millions of Californians who will lose insurance or pay more under Republicans’ plan, and that’s what the Healthy California Act will do.”

Under the Affordable Care Act and Covered California, the number of uninsured in our state is at a historic low, and we’ve slowed rising health care costs. Last year Governor Brown signed Senator Lara’s Health4All Kids (SB 4), and the 2017-18 budget proposal includes $279.5 million to cover 185,000 children regardless of their immigration status. But lack of insurance still affects immigrant communities, rural California, working families and young people.

President Trump and Republicans in Congress have pledged to repeal the Affordable Care Act. But in six years Republicans had not proposed a plan to replace it. President Trump’s executive order on repealing the Affordable Care Act states that the federal government should “provide greater flexibility to States and cooperate with them in implementing healthcare programs.”

Californians for a Healthy California Act (SB 562) was introduced on February 17, 2017. Senators Lara and Atkins will be talking about the details in the weeks ahead with the people of California. The bill is sponsored by the California Nurses Association.

“We need to have this conversation now while hundreds of thousands of people are speaking out in support of health care,” said Senator Lara. “With Republicans on the brink of rolling back health care it’s time for California to lead. I look forward to bringing a bill that Californians can support and the governor will sign.”

Congressman Garamendi’s office has prepared a chart regarding the substantial premium increases that residents of the counties in California’s 3rd Congressional District would face by 2020 if the American Health Care Act is passed and signed into law in its current form. People 40 years of age or older are expected to see substantial premium increases under the law, while 60-year-olds making $30,000 a year could be facing the prospect of spending nearly half their income on insurance premiums. 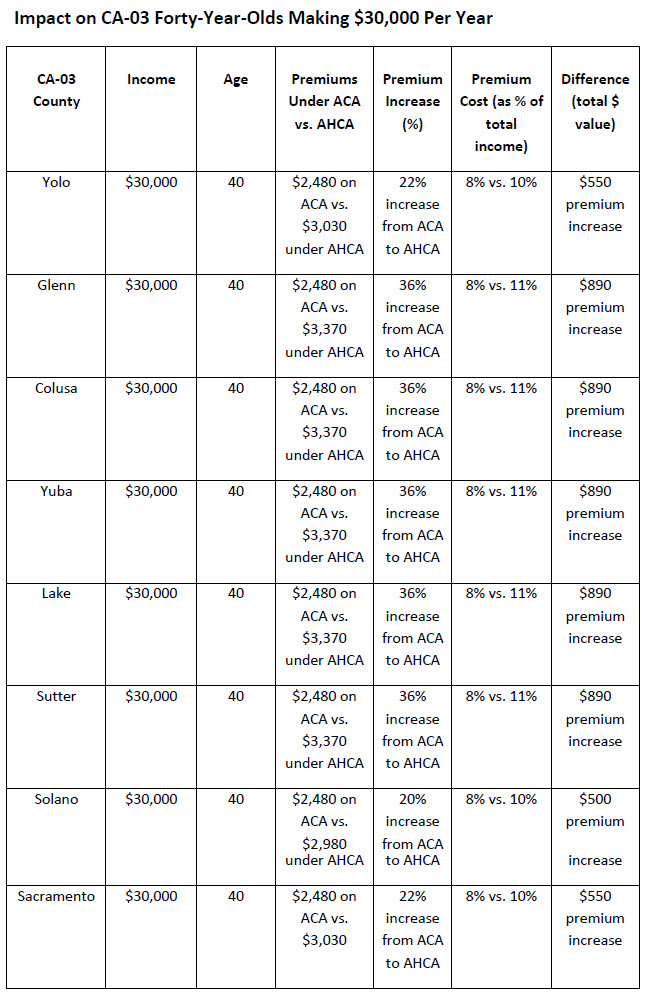 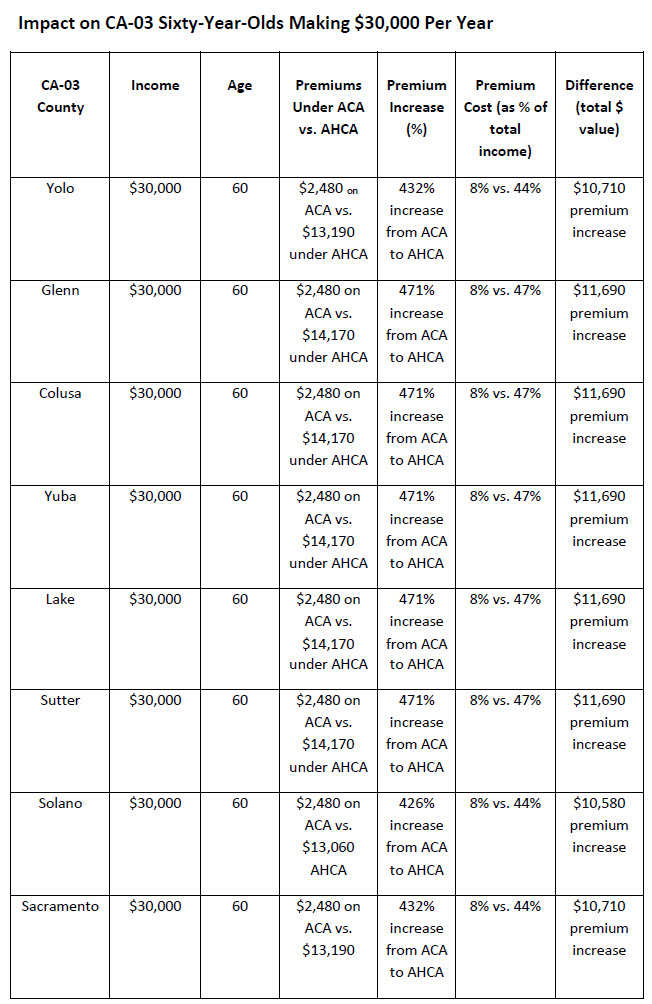 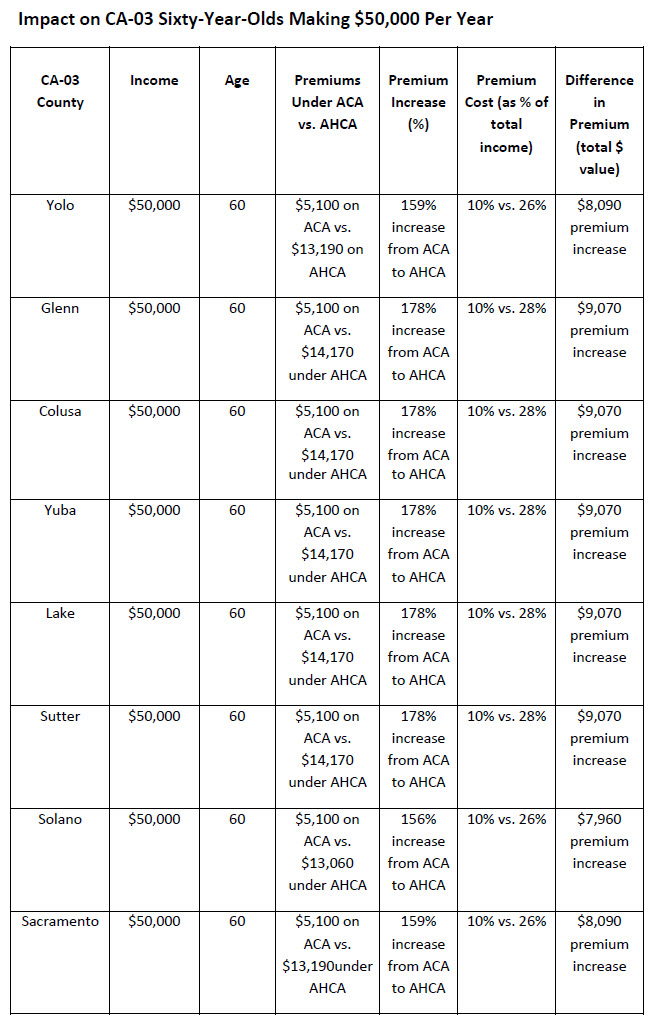 43 thoughts on “Impact of AHCA on Health Care Access”