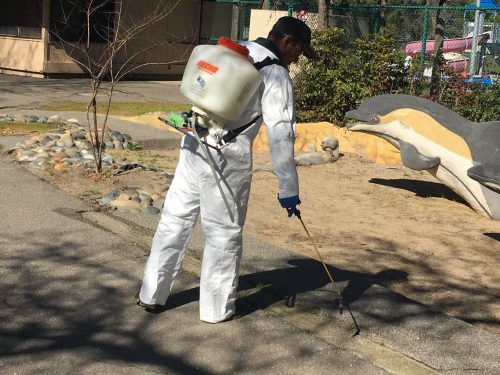 The Initial Report Recommends an Immediate Ban on Neonicotinoid Use by the City, a Phaseout of Glyphosate Use, and Gradual Conversion of Parks and Open Spaces to more Green and/or Organic Status.

This article is timely given the recent incident regarding a controversial pesticide application recently at Slide Hill Park as reported yesterday by Paul Steinberg yesterday in the Vanguard (An Apparent and Sneaky About-Face on Neighborhood Efforts to Care for Parks).

At its January 23rd meeting, the NRC’s Hazardous Substances Subcommittee presented a report to the NRC for discussion purposes that proposed sweeping changes to the City of Davis’ current Integrated Pest Management (IPM)/Pesticide Use Policy. After further discussion on February 27, the NRC unanimously accepted the report with its policy recommendations and proposed next steps. Other Commissions including Open Space & Habitat and Recreation & Parks are currently deliberating the proposed changes and Staff has yet to respond.

The report is entitled “Discussion Paper: Pesticide Use by the City of Davis with Initial Recommendations to Reduce Use In Public Places and Potential for Exposure and to Increase Efficiency”. The report can be downloaded in its entirety at http://documents.cityofdavis.org/Media/Default/Documents/PDF/CityCouncil/Natural-Resources-Commission/Agendas/20170227/Initial%20Report%20on%20Pesticide%20Use%20in%20Davis%20by%20the%20Hazardous%20Materials%20Subcommittee%20of%20the%20NRC%20-%20Final_1-23.

Disclosure by Author – I am a member of both the NRC and their Hazardous Substances Subcommittee that authored the report. I am a past Certified Pest Adviser (CPA) and have been managing a family-owned Certified Organic almond orchard for 30 years. I am also a past Visiting Scientist at the Department of Nematology at UCD where I investigated environmentally-benign pesticide alternatives.

Note by Author: I understand this article will be published on Thursday, March 2 and I suspect it will generate a few comments and inquiries to which a technical response may be warranted. I will be unavailable to provide such responses until later in the day on Thursday but will endeavor to do so as soon as possible.

Following is the Executive Summary and Table of Contents of the Report as accepted by the NRC.

Davis established its first IPM program in 1989 and its first IPM coordinator was hired in 1990. Since 2007, consistent progress has been made by the current IPM Sin reducing use of pesticides in public places across Davis and in reaching out to the local community to teach IPM principles. In particular, steady reduction of overall use and/or elimination of some of the most toxic and or environmentally persistent chemicals has been seen such as glyphosate (a herbicide found in Round-Up TM) and neonicotinoids (a class of systemic insecticide implicated in pollinator die-off).

Within the last year, there have been of citizen complaints and observations about inappropriate use or planned use of pesticides in locations used by children and pets throughout the City where they had previously not been used. These included herbicide spraying or planned spraying in established Pesticide Hazard and Exposure Reduction Zones in certain major parks (Mace Ranch and Slide Hill), directly adjacent to childrens’ or pet animals’ play areas in other parks in South Davis, along a storm drainage channels adjacent to a walking path in North Davis, and in the North Davis ditch open space areas, and green belts in South Davis and North Davis.

An update of pesticide use in the City also shows increased overall glyphosate use as a herbicide in the City as well as a renewed use of neonicotinoids by City Staff replacing an unwritten policy of discontinuance of neonicotinoid . As a result, three different City Commissions discussed the problem and passed a series of motions calling on the City Council to establish a new body comprising representatives of the Natural Resources, Open Space and Habitat, and Recreation and Parks Commissions. The task of the new body would be to undertake a comprehensive pesticide use review in Davis with additional stated objectives of eliminating use of the neonicotinoid class of insecticide as soon as possible due to their adverse effects on pollinators. It was also recommended that the City gradually phase out the use of glyphosate as a herbicide in the City due to recent disclosures of environmental toxicity.

Eventually, it was unilaterally decided by Staff that such a review of the IPM and Pesticide Use policy would alternatively be undertaken by the Hazardous Material Subcommittee of the Natural Resources Commission with subsequent review by all three of the Commissions. This report is the initial effort by this subcommittee to identify and quantify the problems and make specific recommendations to improve the IPM program in Davis.

The City of Davis currently manages 1,616 acres of land that may be subject to pesticide application by the city. This acreage is divided into six major management areas including:

The Public Works Department is by far the largest user of pesticides in the City accounting for approximately 80% of the glyphosate used annually and almost 100% of the herbicides Garlon, Transline, and Telar. Much of this use is associated with the overland flow process at the wastewater treatment plant and associated vegetation management requirements will be eliminated upon completion of the wastewater treatment plant upgrades. In general, the public is not exposed to these applications although there is substantial environmental exposure associated with this use. A substantial amount of herbicide is also used for storm water conveyance channels although most of this weed control can also be accomplished by mowing. Most storm channels are freely accessible by the public and often used by children “exploring” and/or pets during roaming activities

Parks and green belts are the next largest user of herbicides and represent the most common mode of exposure to the general public. Most of the alternative treatments discussed below and in Section 4 of this report have been carried out to some degree to reduce herbicide use in these areas. These herbicides are applied both by City workers and the contracted landscape maintenance firm with that firm using approximately twice as much herbicide as City workers. It is recommended that initial efforts to reduce public exposure to these herbicides should focus on application to parks and greenbelts.

Alternatives to Glyphosate for Weed Control

The overwhelming use of pesticides in Davis is for weed control. However, there are a variety of proven alternative methods available for acceptable weed control in lieu of use of glyphosate or other contact or pre-emergent herbicides. These include:

Alternatives to Neonicotinoids for Tree Aphid and Turf Grub Control

The City has also reintroduced use of a neonicotinoid insecticide (“Imidicloprid”) for treatment of leaf-sucking aphids on some trees (particularly Chinese Hackberry). Such an aphid infestation can result in deposition of “honeydew” excretions which fall to the ground and are unsightly. Staff has stated this presents a potential public safety hazard on concrete surfaces which view in not necessarily shared by the subcommittee.

In lieu of conventional treatments with systemic insecticides (typically neonicotinoids), good control of the problem can be obtained by maintaining tree health and vigor of the tree through proper watering and fertilization, application of a dormant spray during the winter months to smother overwintering eggs (organic copper-oil formulations are available), and release of predatory lace-wings which feed on the aphids in the spring and/or summer if warranted by monitoring.

Grubs live and propagate beneath lawn surfaces by feeding on the grass roots which can cause death or unsightly browning of the overlying turf. Staff has stated such turf damage can result in uneven playing surfaces and possible trip hazards on recreation fields which view in not necessarily shared by the subcommittee. Often neonicotinoids are applied to the turf surface which is uptaken by the grass and results in death of the feeding grubs. Good control can otherwise be obtained by biological release of appropriate nematodes populations which are eaten only by the grubs and results in their near-immediate death, or by application of non-systemic, contact insecticides.

Many U.S. cities, particularly in the western half of the country, have adopted or implemented IPM programs and policies. To various degrees, these mandate use of or consideration of use of cultural mechanisms or organic or least toxic chemicals on public property in lieu of chemicals with more adverse environmental impacts or persistence of health and safety issue.

Following are lists of such California cities:

Following are lists of Western US cities that have Park policies that prohibit pesticide usage in parks:

Following are lists of Western US cities that have policies that prohibit the use of neonicotinoid insecticides on public property with limited exceptions:

This sentiment was also expressed by many of the 25 participants in a survey conducted by the sub-committee both on Surveymonkey.com and distributed and collected after the public forum. The survey results show that the survey participants are quite knowledgeable about IPM, glyphosate and neonicotinoids, and how tolerant they might be of seasonal or periodic “unconventional” or unkempt look that is natural in transitioning from using chemicals to more Green or organic practices.

These results indicate a strong desire on the part of the survey participants to elimof pesticides and a willingness to tolerate some seasonal messy appearance to accomplish long term Green IPM goals (there were no responses that indicated a desire for manicured landscapes in parks or greenbelts). And they indicated they were willing to volunteer their time to make it happen in their parks.