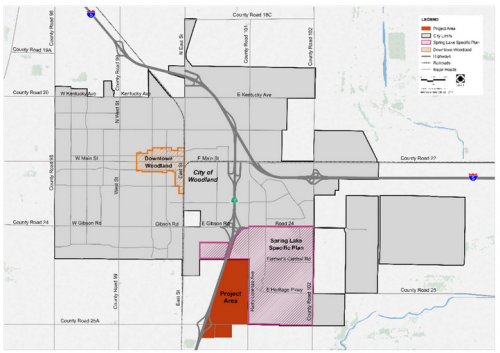 It was the spring of 2014 when the city of Davis put out a Request for Expressions of Interest (RFEI) to get some innovation center proposals.  They got three proposals back that led to two applications – one near Sutter Davis Hospital called the Davis Innovation Center and one at Second and Mace called the Mace Ranch Innovation Center.

By now most are aware of the Mace Ranch Innovation Center (MRIC) which, while suspended, remains a potential possibility down the road as the developers are seeking certification of their EIR.  But the Davis Innovation Center pulled out in the spring of 2015 after getting push back from neighbors at the Binning Tract.

For some time it has been believed that the developers at Davis Innovation Center would move down the road to Woodland – that is now official.  Davis has lost out on millions in annual revenue while Woodland in a year may see their efforts hit pay dirt.

“Our plan has been designed to follow the expressed guidelines and vision of the City of Woodland’s General Plan update,” said John Hodgson, Woodland Research and Technology Group representative. “Yolo County, and this site specifically, is ripe to attract innovation and research interests which will create jobs and grow the local economy.”

Woodland Research and Technology Park will combine a high-tech commercial campus with mixed-­use development, including residential neighborhoods and a community retail and recreation center.

In a phone interview with the Vanguard, John Hodgson said, “In general the city of Woodland has been very receptive to this project.”

He said, “We had the same folks, that designed the Davis Innovation Center, do this plan for us.”

The Woodland Research and Technology Group last week submitted a revised land use plan and project description for its Specific Plan application. The proposed Specific Plan lies within the identified area of the General Plan, SP-­‐1A, and includes 351 acres of mixed-­‐use neighborhoods anchored by a research and technology business park at the City of Woodland’s “Southern Gateway” at County Road 25A and Highway 113.

Of that 350 or so acres, 130 will be some type of commercial.  The biggest part of that is an 80-acre business park.  There will be 34 acres of “light industrial.”  There will be small retail for employees and neighbors to hang out, “but nothing major.”

The housing is on 150 acres – low, medium and high density.  A small majority of the housing, 55 percent, will be low density, traditional single family homes.  Then there is a component of medium density which will be smaller units – condos and townhouses.

High density in Woodland is 20 to 40 units per acre.  That would be three-story apartments or condos.

“The beauty of this plan is we’re allowed to do a community on a comprehensive basis,” Mr. Hodgson told the Vanguard.  “Put jobs where housing is.  Put housing where jobs are.  Put an employment center within ten minutes of UC Davis.”

Right now the proposed total commercial is about 2.15 million square feet – a similar size in square footage that would have been in Davis, but on a smaller footprint.  Most of that is the research park.

The Village Center is part of the tech park, but it is a retail portion.

“This area is a global hub for agricultural research, food production and sustainable technology. The proximity of this site, just seven miles from UC Davis, will offer appropriate facilities for technology startups to put down roots,” added Lon Hatamiya, former Secretary of Technology, Trade and Commerce for California and now Woodland Research Park development team economist.

“In addition to meeting that need, this project will create economic benefits for the City of Woodland by creating new higher-­‐wage jobs, sales and property tax revenues, and fees.”

Additionally, the Woodland Research and Technology Park Specific Plan offers an attractive place to live, recreate, shop, and gather for community events and will complement the neighboring Spring Lake neighborhood.

“The area between Highway 113 and Spring Lake has been designated for this type of project for years. This project couldn’t be better located to intersect public research and private industry,” said Ken Hiatt, Community Development Director for the City of Woodland. “Plans for Woodland Research and Technology Park complement the City’s General Plan and our existing economy that is driven by our robust food and agriculture industry.”

John Hodgson told the Vanguard, “We are going to aim for a year in terms of getting this to council and through LAFCo [Local Agency Formation Commission].”  The area is “in the sphere of influence and in the Woodland Urban Limit line, we need to annex it but it’s been in the sphere for twenty years.  The studies have already been done – so it should be a relatively straight forward decision for the LAFCo folks.”

“I’m not saying anything’s easy, because I’ve never had a project that’s been easy,” he said.  But he thinks the challenge will be getting all the studies prepared.

But again, Woodland’s gain is Davis’ loss.  Mr. Hodgson wouldn’t say it on the record, but clearly they saw this as an easier path to completion and they could get their mixed-use this time, whereas Davis was very reluctant to allow any type of residential.