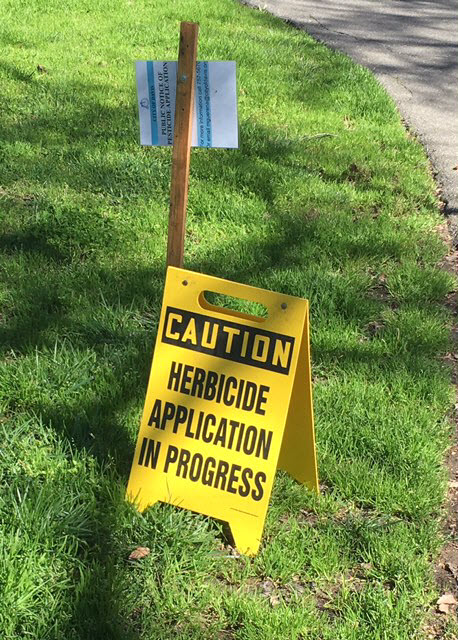 On the 22nd of February signs were again posted at Slide Hill Park announcing to residents that herbicides were to be sprayed and giving the very limited, yet apparently compliant, 24-hour notice.  The anger, disbelief and dismay of local park residents was expressed in emails, calls and conversations amongst us.

Why, you may ask.

Late last year, similar signs were posted in the park announcing the intent to spray.  Slide Hill park is constantly used by families with small children, there is a dog park area, by students playing in the fields, the courts, pool… it’s a well-used park.  As a resident living against the park, I contacted the IPM (Integrated Pest Management) Specialist named on the signs and voiced my dismay.  Not only were the “weeds” not poisonous or in any way presenting a danger, but the notice period was unacceptably short. To his credit, Martin Guerena the IPM specialist, listened to my concerns, we spoke a few times after that and he informed me that the Parks department had agreed to “hold off” for a few days as we residents rallied and organized to manually remove the weeds and apply mulch.  Martin Guerena’s office loaned tools to assist us.

In the heat of those summer days a number of residents turned out and we got the job done! The story doesn’t end there…..

Sometime later, as the initiator and organizer of the neighborhood effort, I was invited to present at a Town Council meeting at which pesticide and herbicide applications in Davis were the topic of discussion.   The meeting was very well attended with many speaking and the overall mood was clearly minimizing and ceasing harmful chemical use in and around Davis.

I presented what we did in Slide Hill Park, why we did it and the camaraderie that resulted from neighbors doing what we do best – cooperate, work together and enjoy meeting people you may live beside but otherwise don’t know.  Additionally, a number of residents in other areas in Davis expressed their willingness to adopt this idea for their local parks.  What better measure of success could one have!

I was thanked and applauded for rallying our local neighbors, including my kids and other children who turned up, and who did an admirable job.

So, when on the February 22nd the city – with NO forewarning or attempt to even contact any of us – posted these signs, we were angry, I was embarrassed at this given all that we’d done in the months before.

On February 23rd I walked into the park to see a city worker, in full protective gear, spraying near the pool.  I approached him, he immediately stopped, handed me a business card and said for me “to call his boss”.  I asked him why he had on protective clothing and gloves.  He responded saying that it was to protect him because he was applying chemicals.  He said his management had apparently all done a walk-through that morning and they had “approved the spraying”.  I immediately called the name on the card: Martin Jones, now Superintendent of Parks & General Services.  (Note, he had already received my email copied here below).

The conversation was quite a long one, however the salient points were:

There was more spoken of, none of which provided me with any coherent explanation as to why the department headed by Martin Jones had made an apparently sneaky about-face following the effort months back and the presentation I was invited to deliver at the Town Council meeting – at which Mr. Jones reminded me he was present!

To his credit, I received an email from Mr. Jones later that day (copy below) letting me know that he had “instructed staff to cease spraying at the park temporarily”.  Concerning to note that he states “temporarily”.  He stated that workers were to “manually” remove the weeds instead – just as we had, and successfully so, months earlier!

For me, many questions are left unanswered.  But I am left with a great film-line that, when answered, so often exposes the truth: “Follow the money” ….

Initial Email to City of Davis:

I was STUNNED to see signs yesterday in Slide Hill Park stating that there was to application of Roundup and Scythe in the park TODAY.

As I certainly assume you are aware, some months ago I was cordially invited to present at the town council meeting about herbicide and pesticide application in Davis and on our neighborhood effort to manually remove weeds, an effort that I had initiated and with the cooperation of Martin Guerena.  We did an admirable job and this was not only praised by all, but other areas of Davis asked about replication of this in their area parks.

Since then, of course things grow back.  I have been in regular contact with your parks department, namely Martin Guerena, about repeating the last effort but waiting on the rains end to start this.  His response has been nothing but positive as to our intentions and efforts.

I am stunned, shocked and frankly embarrassed (given my presentation by invitation of your department) that your department has posted these signs without even the contacting me or other residents ahead of this.  You know full well of our opposition to such application, especially of Roundup.

Some months ago you were applauding our efforts and inviting me to present our neighborhood effort.  Now you go behind our backs, totally ignore all of that sentiment and again engage in a campaign of poisoning the park, and unnecessarily so. I have received NUMEROUS emails expressing anger and concern and enquiries from local residents who knew of the last effort we undertook and learned of the invitation to me to present at the local town meeting.

The obvious question: What on earth was that all about if your department has completely rescinded on the undertaking to support local efforts?

THIS SPRAYING MUST NOT GO FORWARD! I look forward to a response from your department.

I am sending you this update to our earlier conversation regarding the herbicide spraying at Slide Hill Park.  After further consideration, I instructed staff to cease spraying at the park temporarily.  On Monday February 27, 2017 our farm crew will be at Slide Park to manually remove all weeds throughout the planting areas, picnic and play areas, no chemicals will be applied during this time, only hand labor and flame torches will be utilized.  I will be out of the office tomorrow and returning the following Monday, if you have questions during that time please feel free to send me an email and I will get back to you as soon as possible.

10 thoughts on “Park Department: An Apparent and Sneaky About-Face on Neighborhood Efforts to Care for Parks”