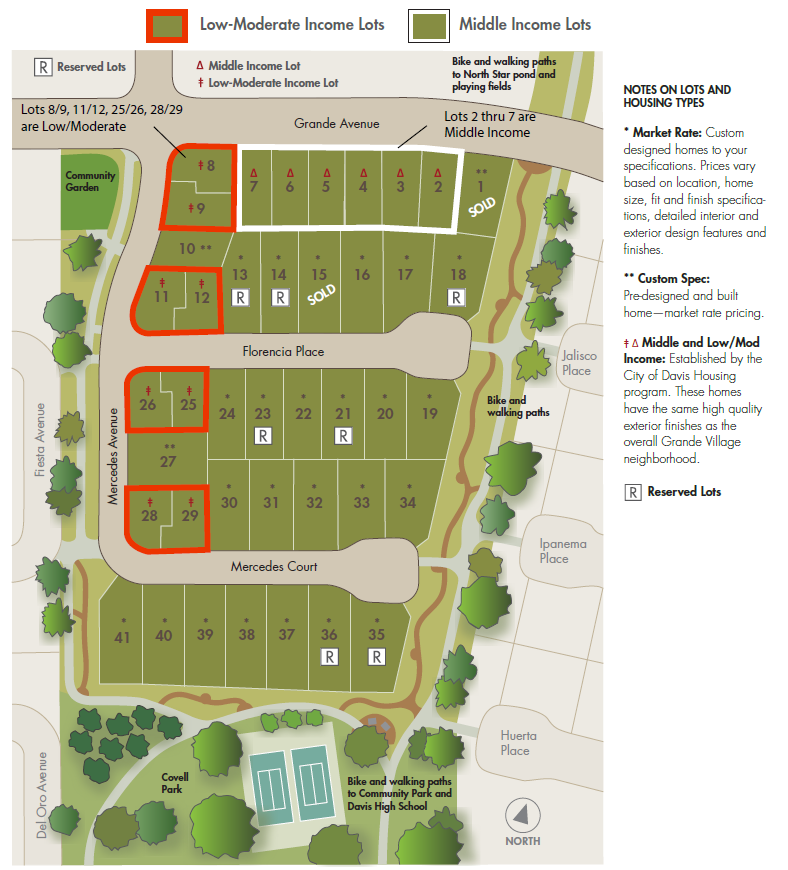 Last week a reader pointed us toward a potential issue of controversy.  On Sunday, Davis Enterprise columnist Bob Dunning wrote a column on the 41-unit development at Grande Village.  Given its history, it should not be surprising that the district surplus property turned housing development should continue to generate discussion and controversy.

Mr. Dunning writes, “The catch here is that under the terms of a three-way agreement between local builder Fouts Homes, the school district and the city of Davis, the first 29 spots in the lottery were reserved exclusively for qualifying employees of the Davis Joint Unified School District.”

Mr. Dunning argues, “If that strikes you as unfair to every other hard-working citizen in Davis who would love to have a shot at an affordable home, it’s because it is unfair. Dramatically so.  Assuming that all 29 households who were given lucky lottery numbers qualify and are serious about buying a home, it’s a virtual guarantee that every affordable home available will go to a school district employee.”

He adds, “Such folks are certainly worthy candidates to own an affordable home, but so are thousands of others in our super-smart and super-expensive town. Everyone who qualifies, district employee or otherwise, should have an equal shot at this extremely scarce commodity.”

The development agreement states specifically, “The city and developer acknowledge and agree that they both have a significant interest in providing affordable housing for the teachers and school district staff within the community.

“In order to help satisfy this need,” the agreement goes on, “the city and developer agree that DJUSD employees will be granted a preference in purchasing the affordable and middle income units to be developed in the project. The initial lottery will be held only for school district employees.”

Bob Dunning again argues: “At this point, just about every non-DJUSD employee in town is probably feeling as if they’ve just been body-slammed, which they have.  Somehow, because the school district once owned this property, the DJUSD brass figured it was OK to make sure its own employees were the only ones in line to grab an affordable home.”

Mr. Dunning writes, “The last time I checked, the DJUSD was not a private corporation responsible only to itself and its shareholders. The plain fact is that anything the district owns belongs to everyone living within the district. As such, everyone should have an equal shot at these homes.”

Mr. Dunning is completely wrong here.  The district does have assets, there are laws by which they are allowed to “discard” public assets and to net profits from the sale.  The sale proceeds from those surplus properties goes to the school district, it doesn’t go to the general community.

“I understand the district’s self-interest here, unfair as it is, but I can’t understand why the city would ever agree to these terms,” he writes.

Could it be because they didn’t really have a choice?  The district could have continued to hold onto the property until they saw fit to sell.  But this ends up being to everyone’s advantage.

The problem here is that we are trying to have things all ways.

As we know, UC Davis has twice in recent memory built staff and faculty affordable housing.  First at Aggie Village and then at West Village.

Why should the school district not get to do the same for their employees, who otherwise would not be able to afford to live here and would have to commute to town?

Mr. Dunning writes: “What if the city decided to sell Central Park to a developer with the provision that only city of Davis employees would be eligible to own the affordable homes to be built on the site? That is exactly what has happened with the Grande property.”

I believe that, under the law, the city would be entitled to do that – and maybe they should do that, given how few city employees live in town and therefore are stakeholders in this community.

That is the key issue – is this an issue of affordability?  Of reduction of carbon footprint?  And there is the practical need to have people who work in our city and in our schools be part of the community and be stakeholders in its success.

This led one of the commenters to argue: “This of course begs the question of why have affordable housing at all? Why not just sell the houses and fix the streets which benefit everybody instead of subsidizing houses for a few people?”

Another commenter pointed out: “When you distort the market for housing and drive up prices by restricting supply with Measure R you can expect half baked attempts at solutions. The real shame is that 112 families who want to be part of this community still can’t buy a home here.”

That is the other reality – we have all contributed to a restricted market, and then we complain when the school district acts in the best interest of their employees as they dispense with surplus property?

In the meantime, the district used its property to generate assets for the school district, while helping a few employees be able to live in Davis.  To me at least, they acted in the public’s best interest by doing so.

41 thoughts on “Sunday Commentary: Should the District Be Able to Reserve Affordables for District Employees?”