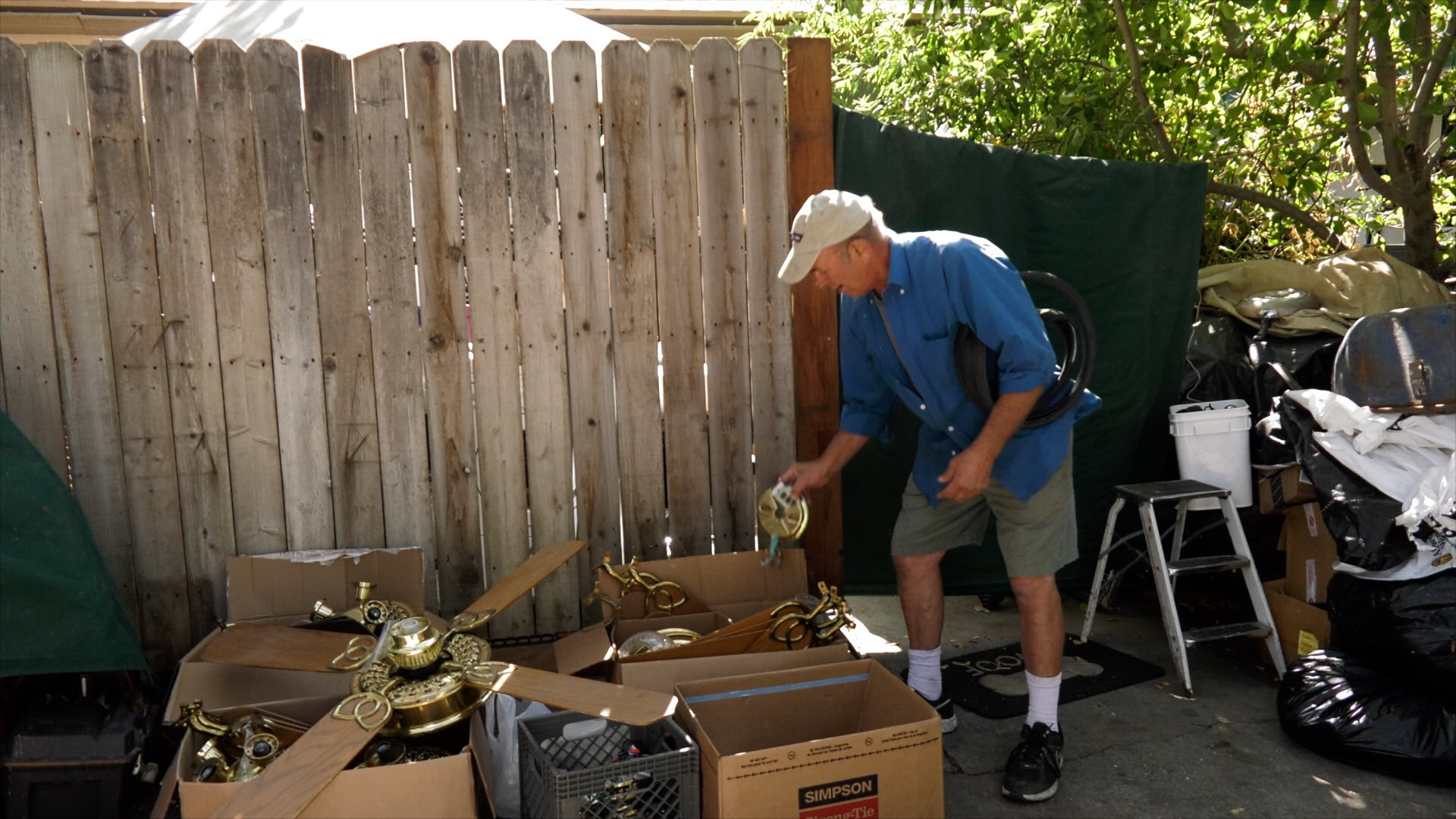 There are so many interesting things going on in Davis that I cannot keep up with them. People here are trying to improve the world in myriad ways. One of them that you are bound to run into in environmental circles is Larry Fisher, the king of making old things new again. Larry is driven by the belief that nearly everything we purchase and use can be diverted from the waste stream and have a new life. Re-use and “upcycling” (reuse discarded objects or material in such a way as to create a product of a higher quality or value than the original) is a mission that he shares with the world through Torema, Totally Recycled Material.

The documentary focuses on Larry Fisher and artist John Schuck (re-use and upcycling artist – who creates furniture and other items out of old bicycle parts). It explores their ingenuity using a little extra energy to convert items that are usually thrown away into new products. Upcycling has the potential to create new green jobs producing useful items with a very small environmental footprint. The subjects demonstrate that humans can be adaptive and bring about a new conscientiousness in our balance with the Earth. The film demonstrates that our promise at the Paris Accords will involve our collective strength to creatively move towards a zero-waste world.

Larry has deconstructed many items he found at the landfill and confirmed that they are of inferior construction and materials. He is concerned that in the US, we have become used to inexpensive, disposable machines. Even laundry machines, which were once kept repaired and running for decades are cheaper to replace than repair.

He says “I see a lot of people who will throw something away. And in the back of their mind is… that their income is large enough — their resources are large enough — that they can throw it away today and three months from now if they need it again they can buy it again because they have the purchasing power.” Larry explains that “it’s not affordability in the sense of what you can afford it now. We now have to look at it as to what the Earth can afford as far as the pressures this (disposable consumerism) puts on the Earth.”

Larry advocates and presents lectures on “hyper-recycling and consumerism for the next generation.” He laments that “we are 5 percent of the world’s population consuming 20 to 25 percent of the earth’s resources.” 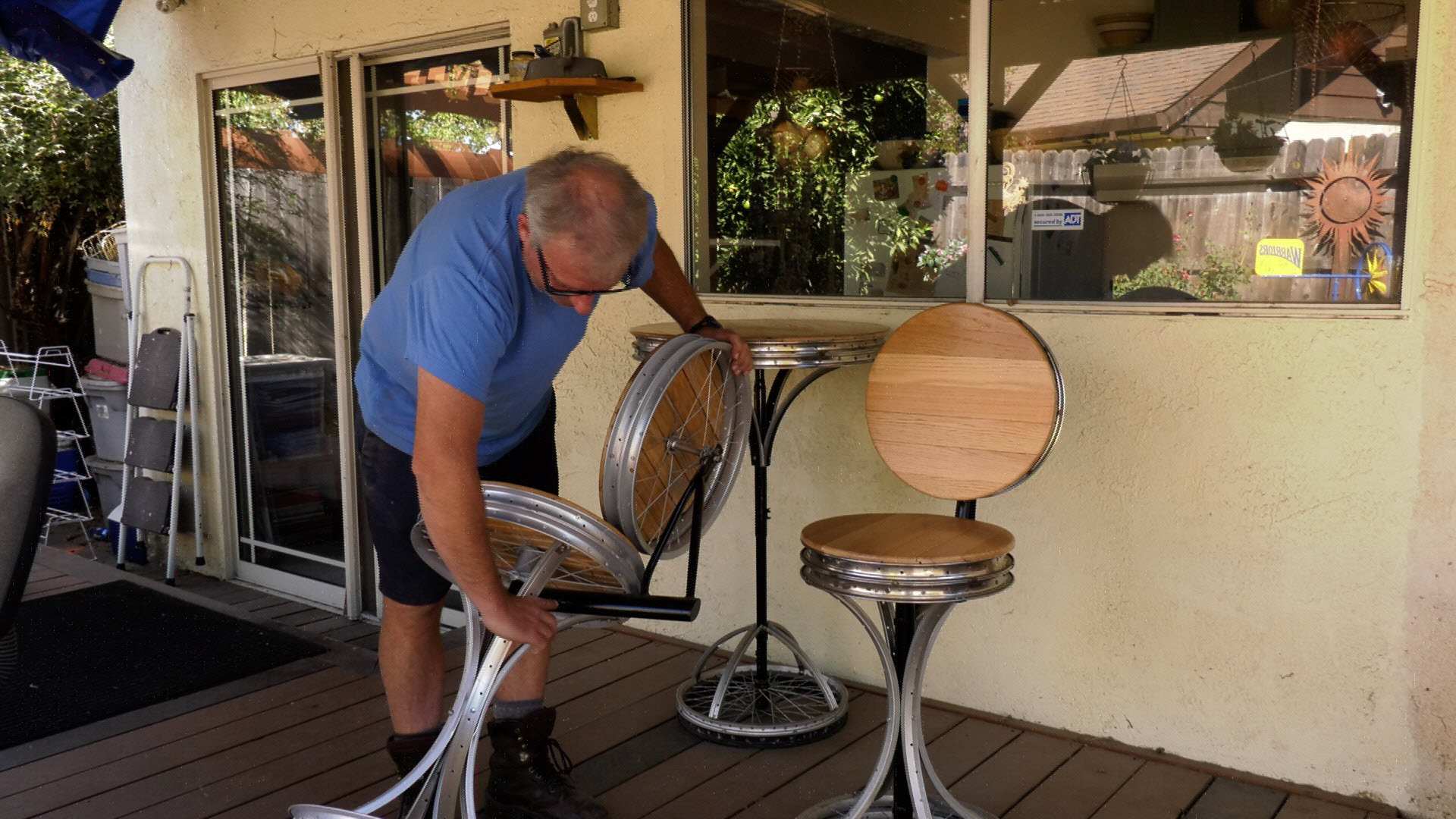 Larry sits on the Yolo County landfill’s Waste Advisory Committee. He has a new way to look at trash, “We have a ‘restore’ (or a thrift store) that is at the landfill now because of the push from different people that many of the items that were coming into the landfill were still good and viable and shouldn’t be crushed and buried there.” So he advocated the landfill should “sell these products and keep them in circulation…I’m a big advocate that we have to look to our landfills as places of innovation.”

“We have products that can be repurposed as feedstock. I’ve outlined quite a few. For instance leaf springs and bed frames and many other things are now melted down and shipped or scrapped out sent over to smelters and in Asia and made into other steel products that are then imported back in the United States.” He says that we need to carefully investigate those products and ask ourselves whether their parts can be fashioned into items here locally so we can stop sending shipping them far away.

In his view “When China had a downturn in their economy — the prices of scrap steel and aluminum and other precious metals have dropped and they are no longer giving high-enough prices. That’s the biggest impetus for us to take a second look and to pay those scrap metal yards to set aside and boost the price that we can give them because we’re doing value-added products — we’re not sending scrap steel over to China. We’re making carts and we’re making benches and we’re making arbors and other structures here with those materials. So that’s the trend I would like to see happen in the United States, I would like to see that we cease to send over materials. We are shipping basically raw materials over to another country and embedding them with a high carbon footprint.”

Larry considered the concept of making products from totally recycled materials. He took the initials of that phrase and created the word ToReMa to describe the concept. He says “now my friends call me up and say I just made something and I made it ‘Toremaʼ and we all know what that means. It means that we have made a product of a very lowest carbon input that we could possibly make. And those are the products we need to make for the world… is the ones that are the very lowest in carbon composition.”

In order to finance the documentary, “Throwaway’ — the Low-tech Path to Sustainability,” Remmers and Mike Kluk are conducting an old fashioned barn raising. They have a funding website and this weekend, they are co-hosting a  Zero Waste Concert with Davis Odd Fellows Lodge #169 and Californians Against Waste Foundation.

It celebrates the arrival of Spring with some of the finest acoustic music in Northern California featuring Misner & Smith, Dave Nachmanoff,  Me and Him, and Good Dog on Saturday, March 25th at 7pm, at the Davis Odd Fellows Lodge, 415 2nd St, Davis, CA.

Tickets may be purchased as part of the Indiegogo campaign or at Armadillo Music or Watermelon Music (the new location on Covell). The evening’s festivities will include a silent auction of amazing upcycled goods and other items. Libations will be flowing at the no-host bar. Doors open at 6:30pm.