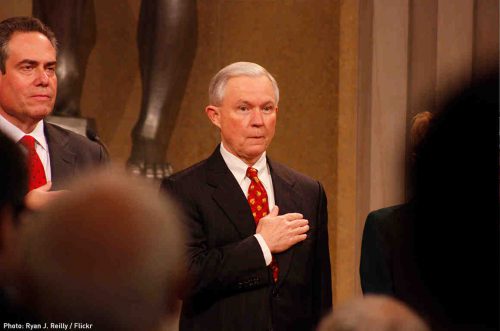 A vague memo was issued on Friday stating, “The Federal government alone cannot successfully address rising crimes rates, secure public safety, protect and respect the civil rights of all members of the public, or implement best practices in policing.”

In the memo he stated, “The Deputy Attorney General and the Associate Attorney General are hereby directed to immediately review all Department activities – including collaborative investigations and prosecutions, grant making, technical assistance and training, compliance reviews, existing or contemplated consent decrees, and task force participation – in order to ensure that they fully and effectively promote the principles outlined above.”

“This is terrifying,” said Jonathan Smith, executive director of the Washington Lawyers’ Committee for Civil Rights and Urban Affairs, who spent five years as the department’s chief of special litigation, overseeing investigations into 23 police departments such as New Orleans, Cleveland and Ferguson, Mo. “This raises the question of whether, under the current attorney general, the Department of Justice is going to walk away from its obligation to ensure that law enforcement across the country is following the Constitution.”

However, many of the jurisdictions that have had consent decrees implemented are balking at the change.

The request came days before a hearing in the United States District Court in Baltimore, to solicit public comment on the agreement which was reached in principle by the city and the Justice Department at the end of the Obama administration.

“The Attorney General and the new leadership in the Department are actively developing strategies to support the thousands of law enforcement agencies across the country that seek to prevent crime and protect the public,” Justice officials said in a filing that might delay the implementation of the agreement. “The Department is working to ensure that those initiatives effectively dovetail with robust enforcement of federal laws designed to preserve and protect civil rights.”

“This has all been negotiated by the affected parties,” said Ray Kelly, the president of the No Boundaries Coalition, a citizen advocacy group.  “Now we have an outside entity telling us what’s best for our citizens and our community when he has no experience, no knowledge.”

On Tuesday, Mayor Pugh and other Baltimore officials added that they intend to reform the police with or without a consent decree, the Baltimore Sun reported.

“I’m asking the citizens to have faith that we will continue this work,” Mayor Pugh said. “We do want to transform our Police Department.”

“Those reforms are going to take place no matter what,” said Police Commissioner Kevin Davis. “We have to continue to stress the necessity of constitutional policing in Baltimore.”

In Seattle, the police department is operating under a five-year-old consent decree, following action initiated by its civil rights division.

Gene Ryan, president of the union that represents police officers in Baltimore, said he welcomed the federal government’s request.

“They can’t undo the consent decree in Seattle,”  City Attorney Pete Holmes said, as reported by the Seattle Post-Intelligencer.  He was critical of the memo, stating, “It is filled with unassailable platitudes about public safety and officer safety.  It seems to me that their more immediate target is the consent decree in Baltimore.”

Like Baltimore, Seattle is moving forward with reform, with Mayor Ed Murray using his State of the City speech “to unveil plans for expanded oversight, a key aspect of putting police reform in place.  These include creating an independent Office of Inspector General, and expanded authority and autonomy for the SPD’s Office of Professional Accountability.

“Mayor Murray has also proposed to make permanent the Community Police Commission, which has been active in pushing reform of the SPD.”

“The consent decree is in place. There are no changes to it,” said Jonathan Aronie, the lead monitor for NOPD’s consent decree. “The court will continue to monitor the implementation of the decree that benefits the citizens of New Orleans and is supported by the city and the police department.”

NOPD spokesman Beau Tidwell issued a statement Tuesday saying the department is “committed to the process of reform, because we believe embracing 21st century policing is the right thing to do for our department and for our residents.”

Former U.S. Attorney for the Eastern District of Louisiana Kenneth Polite published a tweet questioning Sessions’ authority to end consent decrees that are already in place.   He said, “Not sure if Sessions knows this, but he can’t stop Judges Africk and Morgan from ensuring that our NOLA consent decrees move forward.”

The New York Times reports: “Black pedestrians in Baltimore stopped without reasonable suspicion. Black drivers in Ferguson, Mo., searched much more frequently than whites. Cleveland residents punched and kicked by officers and subjected to stun guns, without posing any threat.

“In report after report in the Obama years, Justice Department lawyers found patterns of eye-popping rights violations and used them as leverage to force local departments to agree to major policing overhauls. But the Trump administration announced this week that it was backing away from that tough-minded approach, a move that prompted fierce debate on Tuesday in cities across the country.”

Not surprisingly, the Times reports, “Many police unions welcomed the news, saying the Obama administration’s approach had impeded law enforcement and unfairly painted many good officers as wrongdoers. The unions, a source of support for President Trump during last year’s campaign, welcomed his administration’s announcement as proof that Mr. Trump would swiftly meet his promises to restore ‘law and order’ to the country.”

At the same time, “their view contrasted sharply with those of many police chiefs and politicians who have been living under agreements struck with the Justice Department, who vowed to continue making changes to their police departments with or without the department’s imprimatur.”

“What Attorney General Sessions did, I think that’s just President Trump following through on his promise to help law enforcement,” said Stephen Loomis, president of the Cleveland Police Patrolmen’s Association. “And law-abiding citizens are going to benefit from it.”

“The center of gravity on police reform just shifted from Washington to cities around the country,” said Chuck Wexler, the executive director of the Police Executive Research Forum, which advises departments, as quoted in the Times article. “But use-of-force and policing reform is not going to go away. Cities like Baltimore and Chicago still have local constituencies that are going to expect change.”

However, others are less than hopeful, believing that “federal oversight is crucial to hold local leaders to their promises.”