“When our leaders asked for my support for this effort, I told them I needed several things to be on board:  protecting transportation funds from budget raids; a fix-it first plan; fair share for small and rural communities; and, an even funding split between state highways and local streets and roads,” said Aguiar-Curry.  “I take very seriously asking our people to pay more in taxes, but this plan meets those goals and starts the process of restoring the transportation system that is so critical to our people and economy.”

The bill will provide $5.2 billion in new funds per year, with $2.6 billion committed to state programs ($1.9 billion for maintenance to the state highway system, $300 million to trade corridors, and almost $400 million to congestion relief programs), and $2.6 billion to local programs ($1.5 billion distributed directly to cities and counties for local street and road maintenance, $850 million for transit, bike, and pedestrian access programs, and $200 million in incentive grants to counties with local transportation sales taxes like Napa and Sonoma Counties).

“Our broken roads cost drivers over $750 a year in repairs, farmers have a hard time getting their produce to market, and transit service cuts and increased fares hurt working families,” Assemblymember Aguiar-Curry declared.

She added,  “We’ve ignored our maintenance responsibilities for too long.  I may not have been here to create the problem, but I am among our state’s leaders who are willing to step up and begin fixing it, while also creating thousands of jobs that will go with this critical investment.”

A breakdown of anticipated funding for the cities and counties of the 4th Assembly District is below: 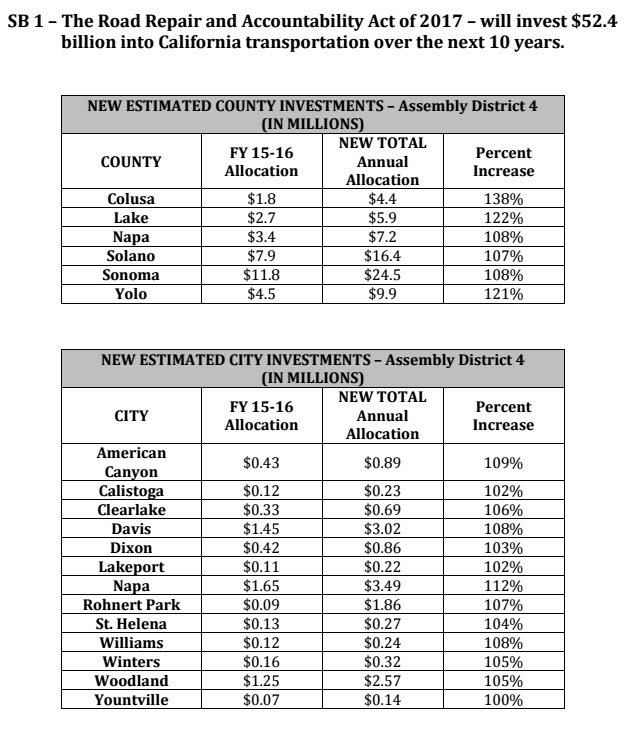 From the Governor’s Office:

Cities, counties, local and statewide businesses and labor groups, transportation leaders and newspaper editorial boards from across California are supporting the Road Repair and Accountability Act of 2017 – SB 1, co-authored by Senator Jim Beall (D-San Jose) and Assemblymember Jim L. Frazier Jr. (D-Discovery Bay) – which invests $52.4 billion over the next decade to fix roads, freeways and bridges in communities across California and put more dollars toward transit and safety. Here’s what they’re saying:

Orange County Business Council Senior Vice President for Government Affairs Bryan Starr: “Moderate increases will reduce costs for motorists in California”
“Our coalition supports legislation which would enact strong accountability measures to ensure that our dollars are spent efficiently, while also providing long-term funding for transportation through a combination of moderate fees and gas taxes of a few dollars a month. In the end, moderate increases will reduce costs for motorists in California who pay almost $800 annually in repairs to their vehicles from driving on bad roads, which pencils out to over $60 per month…situation is too dire for the problem to be fixed with accountability reforms alone…the time has come for the Legislature to step up and urgently pass a transportation funding package (3/26/17)

Silicon Valley Leadership Group CEO Carl Guardino: Legislators need to “move this legislation to the Governor’s desk.”
“It’s time for a Butch Cassidy and Sundance Kid moment – I’ll jump if you jump,” “When it comes to transportation improvements, Democrats often call for additional revenue. Republicans often call for additional reforms. The fact is, we need both, and we need both sides of the aisle to recognize that reality and move this legislation to the Governor’s desk.” (3/29/17)

Metropolitan Transportation Commission Chair and Mayor of Rohnert Park Jake Mackenzie: “This is what real leadership looks like”
“This is what real leadership looks like. The state has kicked the can down the proverbial road for a full generation, during which time some of our rural roads have started returning to gravel. The governor, Senate and Assembly leaders and State Transportation Agency secretary Brian Kelly all had a lot of heavy lifting to do, and they’ve done it. Now we’ll see if our crumbling pavement, crawling traffic and corroding transit infrastructure will spur the rest of our legislators to do some heavy lifting of their own.” (3/29/17)

National Electrical Contractors Association San Diego Chapter Executive Director Andy Berg: “The time to act is now”
“The poor state of our roads is why we’ve joined with other businesses, local governments, labor leaders and many others in urging the California Legislature to urgently pass a transportation funding package…It has been 23 years since California has increased funding for transportation. As a result, road repairs now receive only 50 percent of the funding they did back in1994…Just ask any contractor, or any motorist how urgent this problem has become. It’s past time for our legislators to do something to fix our roads. The time to act is now” (2/17/17)

LA Times: Skelton: “The last time the Legislature raised the gas tax was when a Republican governor, George Deukmejian, pushed for it. That was in 1989.”
“The chief argument against raising taxes on motorists to pay for road repairs is that Sacramento Democrats can’t be trusted. They have a rotten history, Republicans contend, of stealing the drivers’ tax money and spending it on nontransportation goodies. And that argument is basically bunkum. It’s a convenient excuse to vote against unpopular tax hikes. It plays well with the public’s perpetual-but-rising mistrust of government. And more than that, it feeds the natural desire of people to make someone else pay for things they want.” (4/6/17)

Modesto Bee: “Gas tax makes sense, if state sees our needs”
“Those who argue we can redirect part of state’s annual $113 billion budget are severely underestimating both need and resources…Our roads are as deplorable as any in the state. We shouldn’t have to wait until someone swerves to avoid a pothole and runs head-on into another vehicle to fix them.” (4/3/17)

Sac Bee: Editorial: “Gridlock and potholes vex regardless of party”
“Gov. Jerry Brown and Democratic legislators on Wednesday announced a 10-year, $52.4 billion freeway repair and construction deal, and business and labor leaders have been quick to applaud, rightly…includes safeguards, and voters would get a chance to approve a measure that locks in money for transportation…No Republican legislator is backing the deal openly, which is unfortunate. Gridlock and potholes vex regardless of party…we already pay dearly in wasted traffic time and damage from bumps in the roads. (3/29/17)

Sacramento Mayor Darrell Steinberg: “Roads, jobs, transit – why not say yes?”
“California in 2017 has the opportunity to raise money to do something necessary and positive. Roads, jobs, transit – why not say yes? Throughout our state’s history, every generation has reached their own crossroads and made a deliberate decision to do what it takes to build up, not wear down our state structures because we know that the prosperity of our state and future generations depends on it. This is such a moment.” (4/5/17)

Walnut Creek City Councilmember Cindy Silva: “Potholes are not partisan”
“Potholes are not partisan. When it comes to roads, our community members do not care that I am a Republican, nor do they care that one of my colleagues is a Democrat -they just want their roads fixed. Our communities want good roads, they want safe bridges and now is the time for all of us to come together to support SB 1 and to deliver on our promise to our communities.” (4/5/17)

Riverside Mayor Rusty Bailey: “maintaining transportation is a core function of our local government”
“I’m here because our constituents deserve streets and roads they can use to get to work and to school without dodging potholes and risking damage to their vehicles. Maintaining transportation infrastructure is a core function of our local government. Yet in my city and cities across California, that investment has declined in recent years due to a lack of action in Sacramento. That’s why it’s critical that the legislature act to inject funding into our network of roads by passing a funding bill by April 6 this year.” (3/20/17)

Riverside County Board of Supervisors Chair John F. Tavaglione and Vice Chair Chuck Washington: “We all pay, the more they delay.”
“In Riverside County, we have dozens of road projects that have been backlogged because of lack of immediate funding such as the Market Street Bridge reconstruction, Mission Boulevard Bridge reconstruction, Hamner Avenue Bridge reconstruction and the Limonite/15 Freeway Interchange reconstruction. Completion of these projects and many others on the list will improve commute times and residents’ quality of life. That’s why we strongly support…long-term transportation reform and funding packages that contain new revenues to make road safety improvements, fill potholes and repair local streets, highways, bridges and overpasses…We all pay, the more they delay.” (2/10/17)