The presentation by Bob Leland on Tuesday night revealed some sobering news on the state of the city’s finances.  At the same time, there were several surprising findings that required additional questions.

The first question had to do with the roads funding.  The PCI (Pavement Condition Index) chart shows an oddity in that the forecast suddenly rockets back up to 70 PCI by 2018 but then slowly retreats over time back to nearly 60 by 2035.

Since that didn’t seem very logical, we inquired with Public Works Director Bob Clarke who explained, “The model that was presented to Council Tuesday night is the initial draft and is intended to be thoroughly reviewed and vetted by City staff.  The presentation was intended to show what variables are built into the model and the output it produces.  It was not intended to suggest it is in its final form and without possible refinements still needed.” 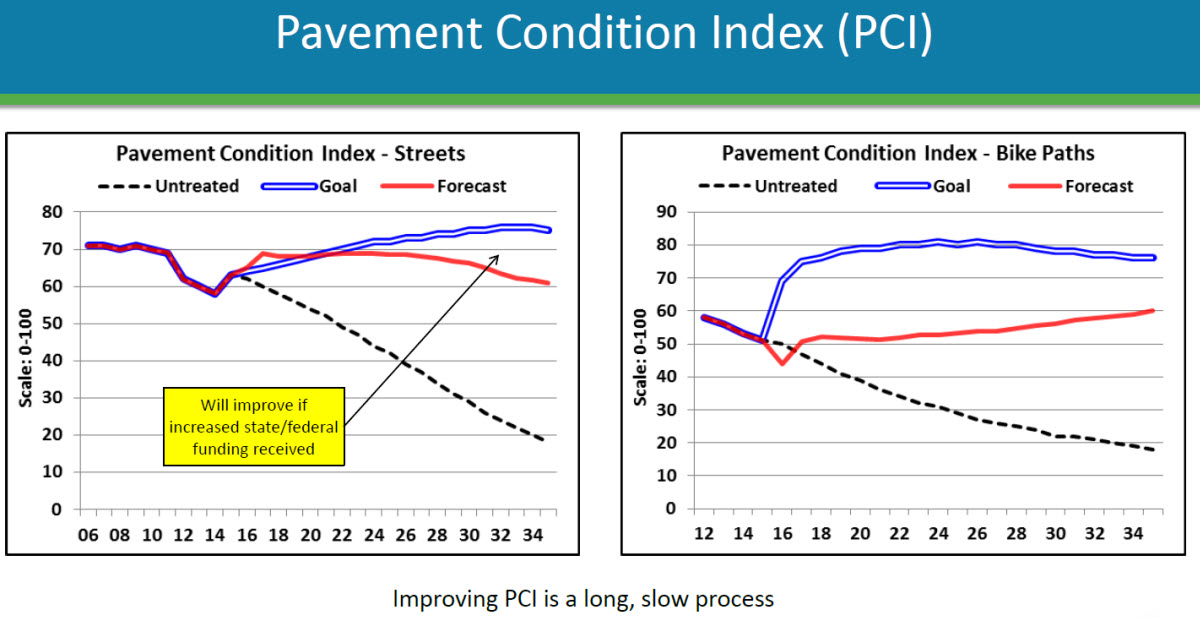 He further added, “Based on my knowledge of the current overall average PCI for our roads, the value projected for 2017, near 70, seems high.

“While we do have a great deal of pavement-related work in progress and expected to be completed this year, I don’t know if it is enough to raise the average PCI to the 69-70 range, but without further review, I just can’t say.  I just received the model today and [plan] to begin vetting the logic embedded in the model next week to determine if appropriate assumptions have been used for transportation infrastructure,” he added.

Consultant Bob Leland explained to the Vanguard, “The original NCE [Nichols Consulting Engineers] study originally envisioned the City spending a total of $4.3M on streets under Scenario 3-City’s Target PCI, in the two-year period of FY16 and FY17, but given outside funding for certain projects, the City will spend more like a total of $14.15M over this period.

“The front-loading produces a higher PCI, but the funding level can’t keep up over time with Scenario 3 funding levels, and thus the PCI starts dropping off later. That said, my PCI numbers are just extrapolations using the funding scenarios from the NCE report,” he explained. “I don’t have access to their extremely detailed model, and in that universe, it can make a big difference which streets you spend money on, their condition, etc. The NCE report will likely be updated periodically, and PCI will be re-benched at those times. The budget model is just an approximation intended to give a sense of whether alternate spending patterns are generally improving or eroding the PCI levels.”

However, the findings on parks seem more significant and it seems like a realistic finding that the funding gap is between $1 million and $1.9 million per year rather than the mind-boggling $300-plus million figure from the Kitchell figure. 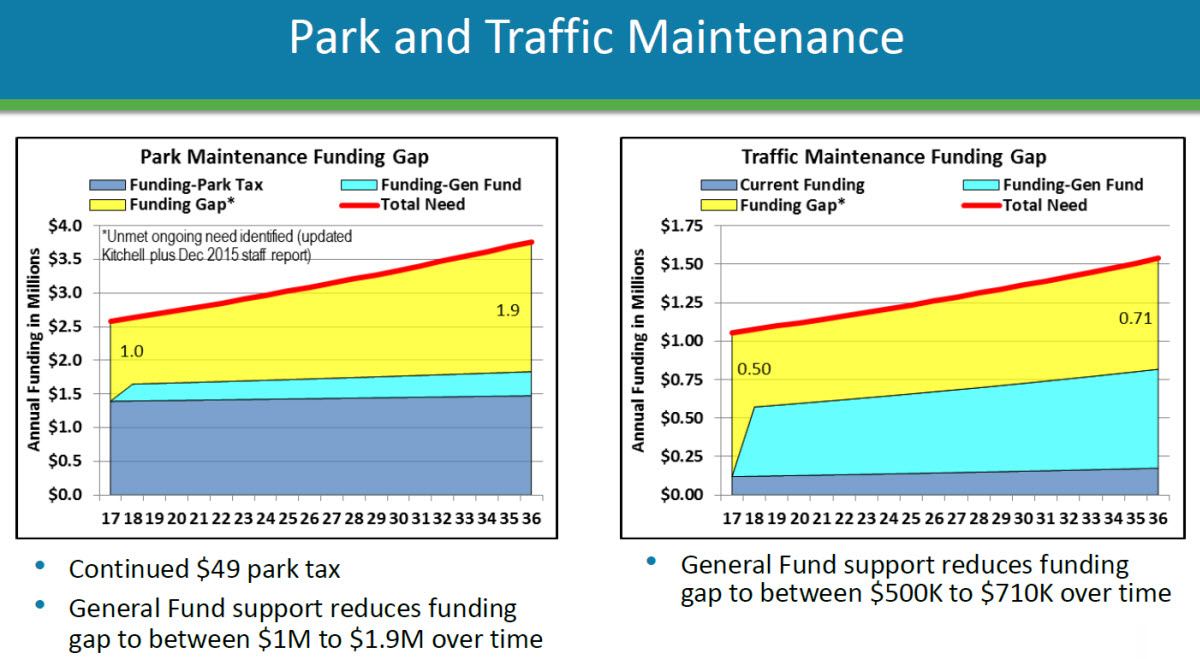 Bob Fung, from Project Toto, explained, “The Parks department (Dale Sumerville) revised their estimates from the Kitchell report.”  He said, “Estimates for years 6-30 went from something like $315M to $3M.”

Matt Williams told the Vanguard, “A partial explanation of the surfaces reduction was that (1) Kitchell had assumed an ‘end of useful life’ approach to turf, which meant significant turf replacement in Years 16-20.  Staff believes those replacement costs can be avoided through more diligent annual maintenance.”

As Bob Leland explained to the Vanguard, “The reality is that you don’t tear down parks and start over every 20 years.”

He adds, “With proper maintenance parks can last for decades. So the budget model focus is on maintenance. The annual unmet need of around $1.2M comes from a combination of staff work done in December 2015 and a recent update by staff of Kitchell’s numbers for parks.”

It is worth noting that even this revised figure “is in excess of what the current park tax can pay for, and includes amounts for playground replacement, tennis court resurfacing, pool equipment, irrigation replacement, general park rehab, urban forestry and wildlife habitat.”

He said, “Kitchell’s actual suggested maintenance expenditures over the next 5 years was a total of $2.69M, an average of only $538K per year. The issue of turf comes up in connection with Playfields Park. The replacement cost of the turf there is $1M. That cost is not included in the $1.2M annual average cost of unmet maintenance needs noted above. Because of its large cost, the city will likely require a variety of revenue sources to address that project.” 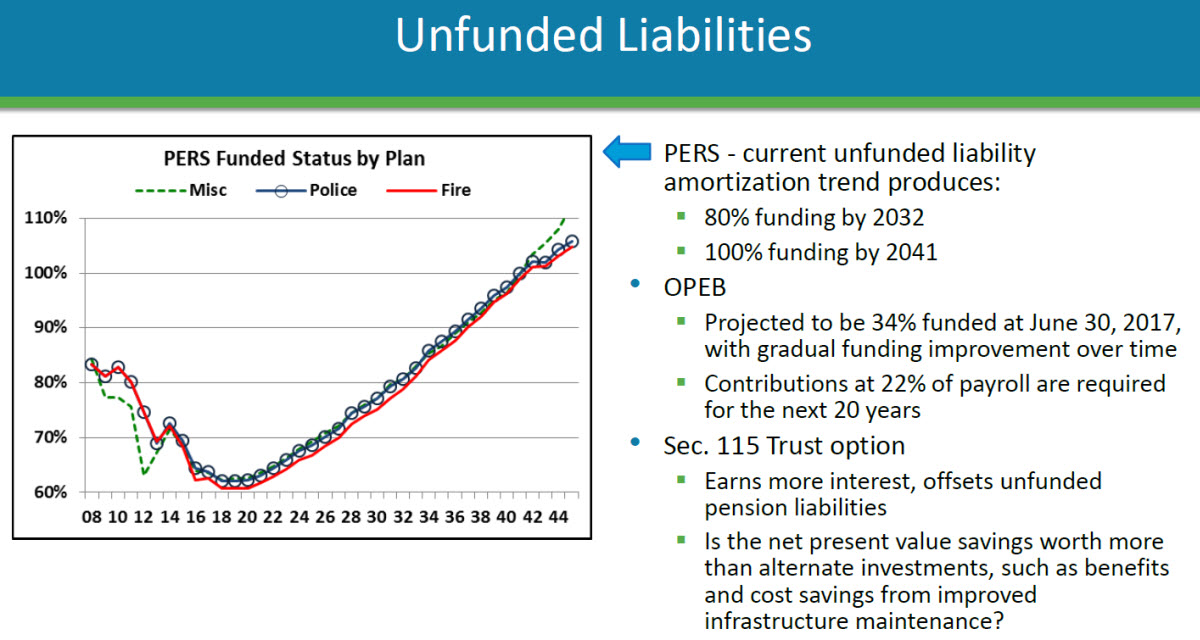 He told the Vanguard, “The costs of both of these are expressed in terms of percent of payroll. There is a chart showing pension costs as a percent of total GF costs, because that is a benchmark people like to point to, but that is not how it is collected.”

He explained, “The normal cost to pay for current pension liabilities is charged as a percent of payroll, while unfunded actuarial liabilities (UAL) are billed to the city as a fixed dollar amount (although the reality is that cities charge UAL out as a percent of payroll to departments for cost allocation purposes, and just settle up with PERS by year-end to hit their required UAL obligation).” 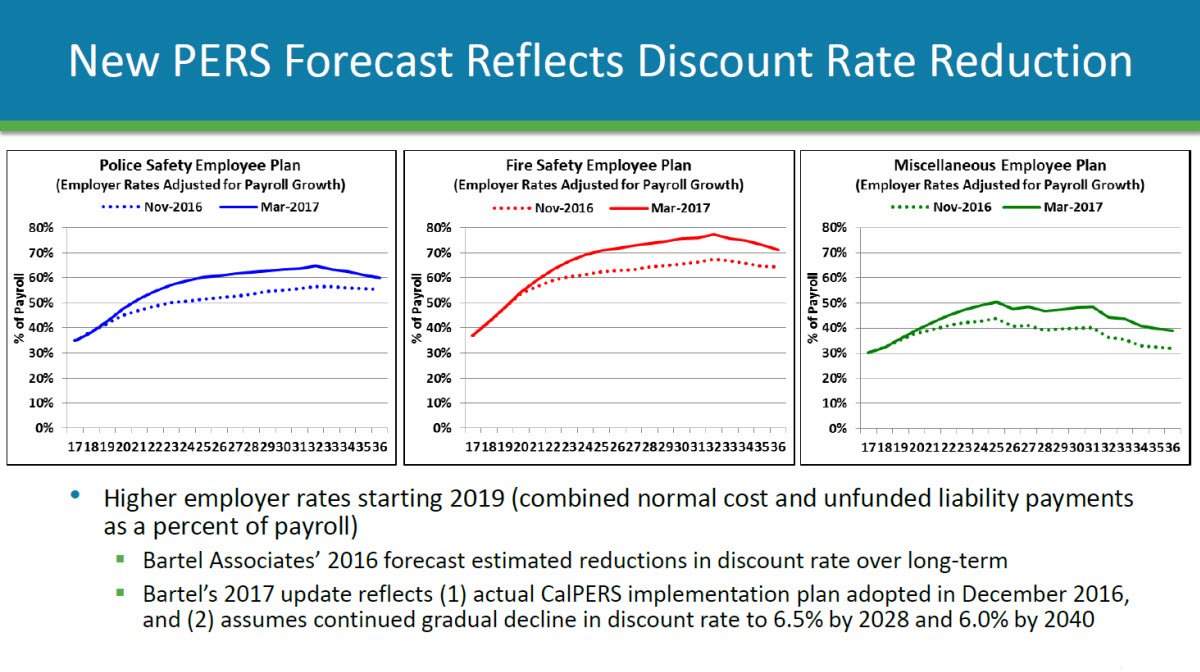 Mr. Leland continued his explanation: “The Annual Required Contribution (ARC) for OPEB is around 22% of payroll, by way of comparison. The chances of an agency meeting such increased pension obligations over time will be improved if the agency utilizes long-range forecasting so they can plan accordingly, and Davis is doing that. But clearly there will be budgetary trade-offs involved as the higher pension costs will preclude alternative investments in service level improvements or improved infrastructure.”

This is an issue of great concern to Mayor Robb Davis, who told the Vanguard, “The growing proportion of the budget that must go to pensions and OPEB means that fewer resources will be available to deal with critical City needs for infrastructure maintenance–be it roads, buildings or parks.”

As he explained, “Local government agencies across the state find themselves increasingly constrained in their ability to meet basic community needs.  Over the past generation, more and more tax dollars generated locally have been taken from local jurisdictions. The combined effect of increased pension costs and decreased tax take is clearly not sustainable in the sense that local needs to maintain already developed infrastructure cannot be met without further local taxation or deep cost cuts in other areas.

“The City of Davis faces these realities and we find ourselves more and more constrained in our ability to meet local needs,” the mayor told the Vanguard.  “Only difficult choices lie ahead.”

34 thoughts on “Analysis: Taking a Closer Look at the Roads, Parks, and Liabilities Assumptions in the Fiscal Model”