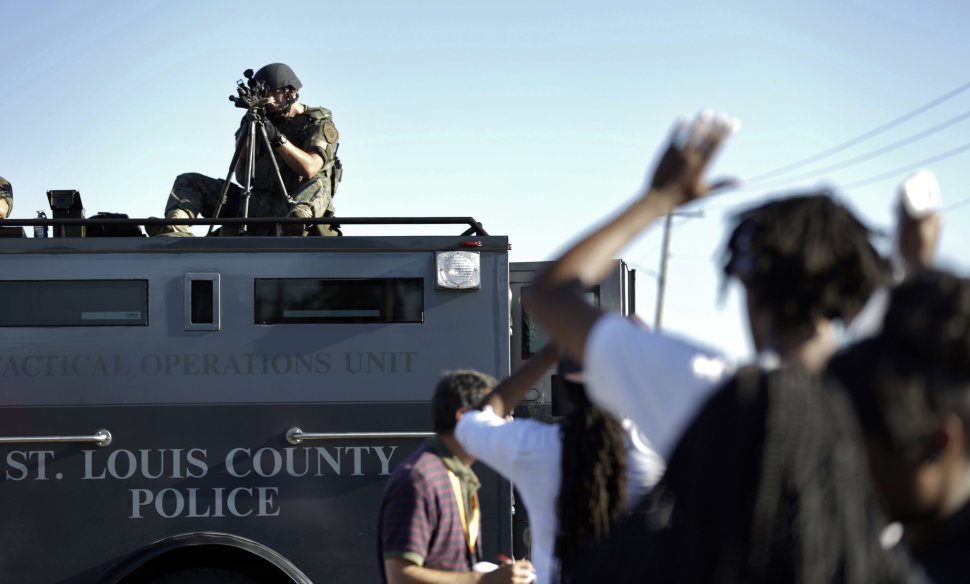 As the Vanguard reported yesterday, Yolo County Sheriff Ed Prieto reversed his request to receive an MRAP (Mine Resistant Ambush Protected vehicle).  While this had to be a difficult decision for the sheriff, who personally lobbied the Yolo County Board of Supervisors for the vehicle back in February, it was the right call.

While the sheriff probably saw the writing on the wall with regard to a vote in late April, he also in a statement recognized that there was a bigger picture.

As the statement read, “The Sheriff recognizes that a vital component to the relations between the community and our officers is trust. The concerns of many community members, which were demonstrated at the Board of Supervisor’s meeting in February, were heard, measured, understood and carefully evaluated.”

The statement noted, “While Sheriff Prieto empathizes and agrees with some of these concerns expressed, ultimately, taking into careful consideration the backdrop of the current national political climate and the fear of police militarization, the Sheriff believes community confidence and trust are more important than the acquisition of an MRAP vehicle.”

Personally, when the sheriff told the board his plan for the vehicle being for “protection to the community and law enforcement officers in high risk emergency operations such as active shooters, bomb threats, hostage rescues and other high risk situations,” I believed him.

However, there are two other considerations here.  First, I do not know who his successor will be in the next few years and, second, it is difficult to know to what extent the federal government can commandeer such a vehicle to use for ICE (Immigration and Customs Enforcement) raids or in response to protests.

We have seen the potential of these vehicles to inflame tensions, as we saw in Ferguson and Standing Rock, and now as we enter a new era and new administration, those concerns only become magnified.

One of the arguments that some opponents had against the acquisition of the MRAP by the sheriff’s department is the existence of two MRAPs in the county already – one in the Woodland PD and the other with the West Sacramento PD.

The presence of two MRAPs should be a matter of concern rather than comfort.  There is no doubt that there are legitimate needs and uses for armored vehicle.  But those needs are remote and infrequent.

It is notable that less than six months after Davis’ City Council voted 3-1-1 to send back the MRAP that Davis police had acquired, that very MRAP (which Woodland then accepted) was back in Davis along with the one from West Sacramento.  Was a potential hostage/active shooter situation a legitimate use for the vehicles?  Perhaps.  But at the same time, there was no guidance or oversight on its use.

One of the points that the sheriff makes in his statement is, “To purchase a similar vehicle would cost the tax payers well over $200,000 for the initial purchase.”

Davis had a similar discussion a few years ago when the council offered to consider purchasing a more appropriate and less militarized armored vehicle at a similar cost of $200,000.  Davis’ police chief largely turned that purchase down.

Why?  Because there were other priorities for the use of that money.  The police can argue that having to purchase a vehicle of this sort would come out of other priorities, but what this tells me is that the vehicle is a “nice to have” rather than a “need to have.”

What this brings up is that rather than feeling “safe” that there are two MRAPs in Yolo county, we should discuss whether we need any MRAPs at all – and, if we do, we should as a community discuss when and how vehicles brought into our community should be used.

The ACLU notes, “Federal programs providing surplus military equipment, along with departments’ own purchases, have outfitted officers with firepower that is often far beyond what is necessary for their jobs as protectors of their communities. Sending a heavily armed team of officers to perform ‘normal’ police work can dangerously escalate situations that need never have involved violence.”

The ACLU continues, “The ACLU’s recent report on police militarization, ‘War Comes Home,’ found that SWAT teams, which were originally devised as special responders for emergency situations, are deployed for drug searches more than they are for all other purposes.”

While some of those may be dangerous situations, even in this county we have seen raids on marijuana cultivation, such as the case by TRIDENT (Tri-County Drug Enforcement Task Force), which came into Yolo County and raided a legal cultivation operation in western Yolo County.  That operation saw kids subjected to heavy-handed police actions and, with the availability of an MRAP and other military equipment, the possibility that an outside agency could violate our local norms simply increases.

Last year the New Yorker reported a filmmaker noticed that, in response to the Boston Marathon bombing, “the police in Boston and its suburbs sent armored cars into the streets and deployed officers dressed like Storm Troopers, who carried assault rifles and fanned out across neighborhoods as though they were in an infantry division in Afghanistan.”

The filmmaker, Craig Atkinson, would ask himself “when did local police forces, in their equipment and tactics, come to resemble armies of occupation?”  He created a documentary called Do Not Resist which “traces the transformation of police departments across the United States into forces that often look like our Army and Marines—and all too often act like them.

“The film takes a series of events that might appear unrelated—the heavy-handed police response to the demonstrations in Ferguson, Missouri, in 2014; the use of heavily armed SWAT teams in South Carolina to carry out routine drug arrests—and shows that they are part of a pattern that has taken hold in many police departments across the country.”

“What we discovered is that the there had been a massive change in the tactics used by SWAT teams,” Mr. Atkinson told me. “And that happened as the federal government was giving away military equipment to police departments.”

We therefore applaud the sheriff’s decision, but what we want to know is when can a community like Davis or the Yolo County Sheriff’s Office bring in an MRAP from West Sacramento or Woodland?  Are there rules that govern this?  And who oversees it?

Shouldn’t we have a community discussion that lays out the parameters of use?

Or, to ask my initial question: How much militarization of police do we need?

3 thoughts on “Commentary: How Much Militarization of the Police Do We Need?”