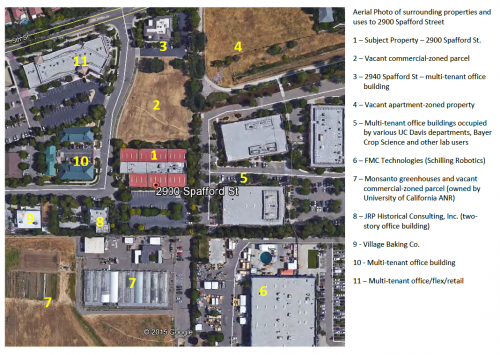 When the UCD Materials Growth Lab, proposed for 2900 Spafford Street, comes before the Davis Planning Commission on Wednesday, they will be asked to vote on a Conditional Use Permit.

The findings of that CUP are as follows:

From the standpoint of the Planning Commission, parts two and three seem particularly problematic.  You have very real safety issues that have been raised by the public, and you have the issue of compatibility of such a lab with several low income housing complexes and a Montessori school – all in close proximity.

I don’t want to downplay those, but for me the biggest issue is frankly not in the purview of the Planning Commission, and it has to do with a very basic but fundamental question: what is the benefit to the community for placing such a facility in the city?

Not only does there seem to be no benefit – there is a fundamental harm.  The harm is that every time UC Davis becomes the tenant in a commercial building in Davis, the city loses both in terms of property taxes and also in terms of opportunity costs – that is a space where a private company could occupy and therefore generate tax revenue for the city.

There may be ways around this issue, through agreements with the university to make the city whole when they occupy commercial space – but make no mistake, this is a huge issue, it transcends the land use issues of this particular topic, and it is not within the purview of the Planning Commission.

Matt Williams in a comment notes that “until the last 24 months no one gave any consideration to asking UCD to voluntarily forgo the benefits they realize from the provisions of the State laws regarding Property Taxes for non-profit and government entities.”

But, as we move forward, this ends up being a huge issue as the city is looking to take university research projects and utilize tech transfer and become the home to start ups from the university.  It would be in the best interest of both the city and the university to address this issue sooner rather than later.

Until it is addressed, there is zero benefit to the city to approve this request.

While I think there are legitimate issues that are raised on the health and safety side, I would not necessarily oppose the project solely on their basis.  The problem is that there is no upside to balance against the risks.

The city gets no benefit from doing this.  I disagree with those who argue that this type of facility belongs on campus – I think that’s incredibly short-sighted.  But, without benefit to the city, why should we allow for a conditional use permit, given the risk to the nearby residences including Montessori kids?

For the Planning Commission, they should focus in particular on the issues of public welfare and compatibility – I think those are close calls.  However, this issue really needs to get to the city council and it really needs the council to take leadership on the issue of tax-share when the university occupies commercial space in town.

I think we want to be good partners with the university – but good partnership is a two-way street, and if UC Davis is getting all of the benefits and none of the risk, that’s not being a good partner.

10 thoughts on “Commentary: UCD Materials Growth Lab Does Not Benefit the Community”