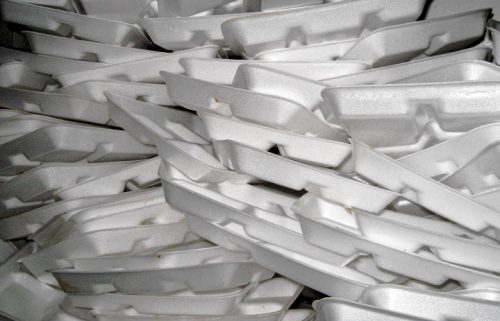 The Davis City Council on Tuesday will be considering an ordinance to ban polystyrene from being used for serving food and beverages in Davis, as a means to reduce litter as well as impacts on wildlife and landfill. The ordinance will require all items for serving food or beverages to either be reusable, recyclable or compostable.

According to a press release, a letter was sent out to all impacted businesses in early March informing them about the draft ordinance.  The city held two stakeholder workshops, but only a single business came to the workshop.

Staff reports it has received no further concerns about the ordinance from businesses and nothing but positive response from residents.

According to staff, “Polystyrene foam food and beverage packaging is not recyclable. Under the current city recycling program, all other single-use food packaging items are accepted as either recyclable or compostable.

“There are economical, compostable, recyclable and easily attainable alternatives to polystyrene foam,” says Mayor Robb Davis. “There are more sustainable products out there that can go someplace besides a landfill after being used.”

The city council adopted a Zero Waste Resolution on December 6, 2011.  That resolution “encourages the implementation of zero waste strategies to conserve resources and reduce greenhouse gas (GHG) emissions, waste, litter, pollution, and the overall negative impact on the environment, including the effects on wildlife.”

Under this zero waste goal, “the City has been working to divert as much waste as possible from the landfill via recycling and composting.”  The adopted recycling program collects a wide variety of materials for recycling, including straws and plastic take-out cup lids, to increase waste reduction and remove more material from the landfill.

The city also introduced an organics collection program in July of 2016 that collects a wide variety of food scraps and food-soiled paper from all customers for composting, staff writes.

This draft ordinance would be eliminating one of the few remaining waste streams by eliminating “all non-divertible disposable serving ware – including polystyrene foam.”  Staff writes, “With this ordinance, all serving ware used in Davis will either be reusable, recyclable or compostable, making it easier for the City to achieve its waste reduction goals.”

Key points from the draft ordinance include the following:

According to staff, Davis is not the first city to consider this kind of ordinance.  Currently there are 99 jurisdictions in California that have adopted some form of local ordinance that bans the use of polystyrene foam.

Statewide legislation to limit the use of polystyrene foam in food packaging has been attempted but has thus far not been successful – most notably, SB 529 in 2014 that would have required fast food chains to use food packaging that is compatible with local recycling and composting infrastructure.

That legislation, sponsored by former California Senator Mark Leno, would have prohibited large fast food chains with more than 20 locations from providing disposable packaging or single-use carryout bags that are not recyclable or compostable.

But the bill drew opposition from restaurants who claimed it would burden the industry that often operates with low profit margins.

However, as staff notes, this proposed ordinance has not drawn significant opposition.

Under the draft ordinance proposed to start July 1, 2017:

What would not be allowed:

What would be allowed:

THE DRAFT ORDINANCE WOULD NOT APPLY TO:

Share:
Tags:compostEnvironmentpolystyreneRobb DavisZero Waste
Previous : Teens Engaging in Sexting Should Not Be Prosecuted as Sex Offenders
Next : UC Davis Responds to the City of Davis on LRDP