As the hour approached midnight and the council listed to dozens of citizens on both sides, including a relatively large number of students, the council – citing a desperate need for student housing while being somewhat wary of this proposal – unanimously approved the project, asking staff to come back with a number of conditions for the development agreement.

Among the conditions placed were an agreement on the provision of pool passes for the low-income residents to city pools, an exit fee for those parking their cars onsite as storage, a look at water conservation incentives, and commitments to green sustainability as well as participation in the community choice energy arrangement.

The council, led by Mayor Pro Tem Brett Lee, wants to come back with some sort of statement of support, committing to preserving Rancho Yolo.  The mayor pro tem felt that the residents of that mobile home park, who own their homes but not the land, feel especially vulnerable.

Mayor Robb Davis mentioned that he and Lucas Frerichs have been in talks with the Yolo County Supervisors about a potential conversion ordinance that would make it more difficult to convert mobile homes to other uses.

There was also talk about the need to look into construction impact fees at a future point.

Josh Vasbinder, representing the Dinerstein Corporation, noted that after meeting with residents they agreed to reduce the density of housing.  Mr. Dinerstein and others attempted to dispel the belief that this project was effectively proposed with the idea of a compromise in mind.

At the same time, he laid out the clear need for student rental housing.  He noted that, according to the 2016 Vacancy Report prepared by the UC Davis Student Housing Department, there is a 0.3 apartment vacancy rate to go along with an overall 0.2 vacancy rate.

He noted that they surveyed around 9,969 units, accounting for 83 percent of all the multifamily housing stock in the Davis community.

Those findings mean that there are less than 30 units vacant and available to renters in the entire city.

Mr. Vasbinder presented the following: “According to the City’s 2016 Residential Report, of the 266 residential permits issued, Zero (0) were issued for market-rate/student apartments.”  Furthermore, “While the city is meeting the targets for all residential categories, they are not meeting targets for market rate/student apartments.”  And finally, “The majority of the apartments developed over the last several years have been dedicated affordable units.”

He also told the council they are committed to LEED Gold and photovoltaic, stating, “We’re certainly committed to being as green as we can.”

One of the concerns was the enforceability of the single-occupancy per bedroom lease.  Mr. Vasbinder explained that everything goes into a software program – when anyone leases bed space, that bed space is taken off the software.  “We have the ability through the program to almost block out or x-out bed space so that it stays the 540,” he said.

Everyone will sign an individual lease, and they have ways to manage guests to avoid freeloaders.  He also explained that they will be over-staffed to address these issues, plus there will be quarterly reviews and audits.  At other sites they have effectively managed these issues with no problems.

During public comment, there was a split in the community view on housing.  One resident noted, “I am really concerned that the city of Davis is building dorms in the city.”  Another said that, while she was concerned about the students’ access to housing, she was worried about the affordability of the units.

From the student perspective, many expressed concerns about the scarcity of housing and the possibility of some students going homeless.

Councilmember Rochelle Swanson said that “this started out as a land use issue, but at the end of the day, it’s becoming a social justice issue.”  She said, “We want everything and we want nothing.  We want small affordable housing and yet we want Platinum LEED Perfection.”

“I hear the concerns about the General Plan and Great Planning,” she said.  “It’s a long process.  How many students are going to stay homeless on our watch while we struggle for perfection.  It is true that the perfection is the death of the good.”

She said the thinking by some is “let’s just shove this off one more time” as we try to make the project better.  But she said, “I just can’t because it starts to feel wrong, it starts to feel like hypocrisy.”

Councilmember Swanson noted, “It’s been called dorms.  I’ll be honest at first, I was a little uncomfortable with that.  Then I stepped back and thought, how many mini-dorms do we have in this town – unofficial mini-dorms.”

She noted pulling kids out of single-family homes “allows a place for a young family to come in.  We are a zero sum game right now, when we are at 2 percent vacancy.”

Councilmember Will Arnold noted, “This is the most difficult issue that we as a council have had to deal with since I’ve been on the council.”  What he realized is that there is a legitimate fear of potential displacement in the Rancho Yolo residents, and that “must not be ignored.”

He said plainly, “As long as I am on the city council, I will fight to support Rancho Yolo, period.”

But he also noted that a lot has to happen for those fears to materialize and he said that that is not the case in many other places in Davis where displacement is happening now.  He gave several examples including the student who spoke saying that she was mentally preparing herself for homelessness.

“These stories are so common now that they’re almost cliché,” Mr. Arnold explained.  “This is not a possibility or a long-from-now threat of potentially being displaced that may or may not manifest.  This is the current reality for a number of our neighbors.

“UC Davis is not doing enough to house its students on campus, that’s not just my opinion it’s a fact based on their own previous commitments to the city,” he said.  “But even in the best case scenario in which UCD tomorrow agrees to our request which they’ve given no indication that they plan to do, and then they keep their word on that promise which they’ve never done before, the best case scenario is that the current dismal state of housing stays exactly the same for the next ten years and beyond.  That is unacceptable.”

Sending the message to UC Davis, he said that “should we approve this proposal tonight, we are stepping up to the challenge you have created.  It’s time for you to do the same.” 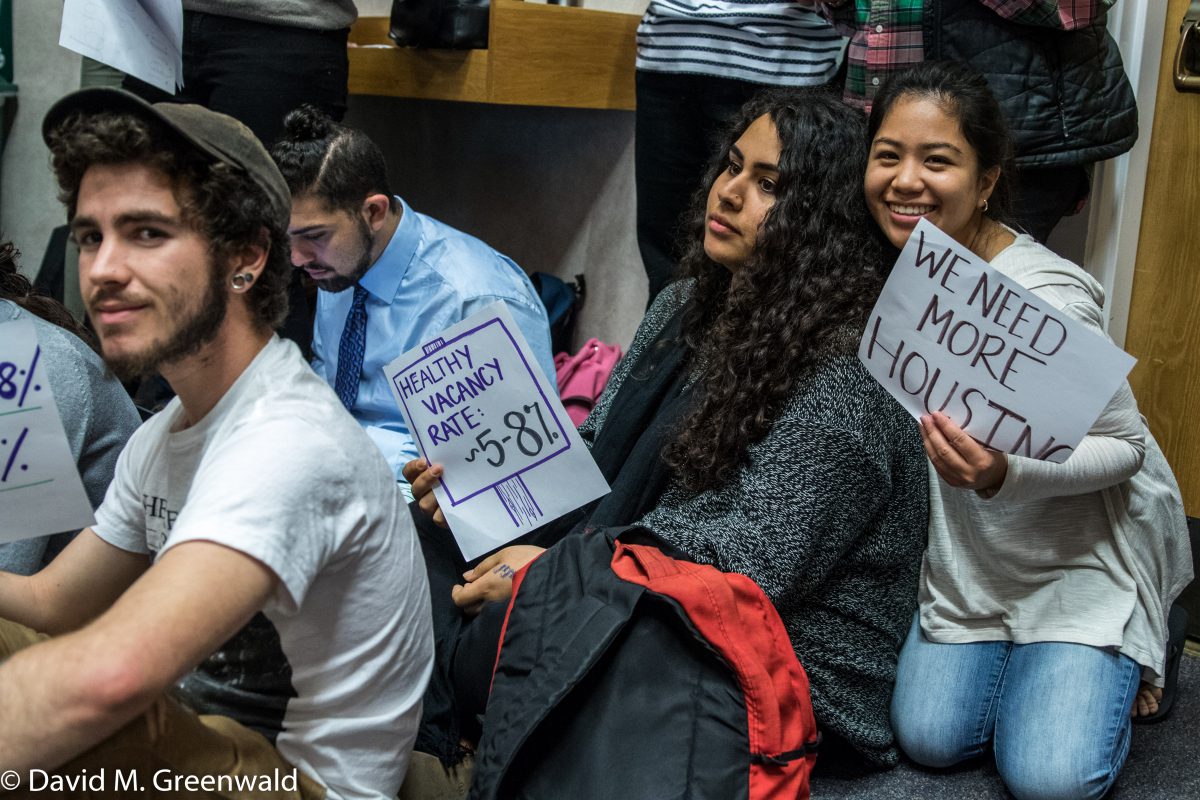 Mayor Pro Tem Brett Lee, clearly the most skeptical of this proposal, nevertheless said he would support it as long as his colleagues agree to make assurances to the Rancho Yolo residents, recognizing that they feel vulnerable and that no one knows where these zoning changes will stop.

At the same time, he recognized the need for housing, as he put it, “You can sense the desperation.”

He said, when he was approached about a conflict resolution process, he was skeptical, believing that this was a losing proposal.  He said that when Sterling came forward, he believed it was inappropriate in size and configuration.

Mayor Pro Tem Lee said, “I did sit down with those groups and the discussion was productive. My biggest issue is that it really was a mini-dorm.  It still is a big issue for me.”

He suggested it should be a normal configuration apartment that allows for other people than just students to reside there.  At the same time, he said that “this was caused by the university not housing enough students on campus.”  However, he said, that argument doesn’t make any sense, as housing students at Sterling will free up other spots on campus.

Councilmember Lucas Frerichs said, “The need for housing in Davis, I think, is imperative right now.”  He noted, that the city and the city council “have been very strong and forceful with UC Davis regarding their lack of responsibility or lack of action for building adequate amounts of housing for students on campus.”

He said that will continue but “we cannot force them to build housing on campus.”

Mr. Frerichs noted, “I’m pretty saddened that there are so many folks struggling to live in this community regardless of age.  Many people in my own peers are choosing to leave Davis because they can’t afford to be here any longer.”

Finally, Mayor Robb Davis was appreciative of the thoughtfulness of the discussion and noted that they really do as a council wrestle with these issues and try to take stock and account of them.

He said,  “I believe that this council is taking a holistic approach to housing in this community – in fact I reject the notion that we’re not”

The mayor noted that when he looked at the now nearly decade-old Housing Element, he said that “priority properties have been systematically developed.”  At the same time, he cautioned, “Opportunities don’t come when we command them to come.”

He called Sterling “an opportunity that comes at a time when we have a need.”

He said, “We have given input into the LRDP, we have been as aggressive as we can.”

He said, “I bridle at the idea that (we are) not taking a holistic view.  Look, infill by definition (is a) messy and leapfroggish proposition.”  He said they sit up there with constrained choice sets.