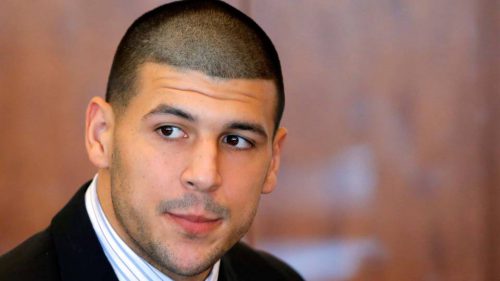 Aaron Hernandez’s death shook me.  Wells of tears collected behind my eyes for a man I never met but felt like I knew intimately.  In Aaron Hernandez, I saw my clients.  In him, I saw me.

When news of Aaron’s arrest for Odin Lloyd’s murder broke in 2013, I stumbled across a Rolling Stone feature about his fall from grace.  The story detailed Aaron’s close relationship with his father, Dennis, and Dennis’ sudden death when Aaron was just 16 years old.  The article noted that  Aaron “locked down” after his father’s death, igniting his implosion.  “He wasn’t the same kid,” his mom said.

To make matters more complicated, his mother Terri, once arrested in 2001 when Aaron was 12 for alleged involvement in a sports betting scheme, married a man named Jeffrey Cummings, a controversial figure in the the Hernandez family.  Within a short period of time, Aaron’s father, his rudder, was unexpectedly gone and Mr. Cummings had moved into his home.    In 2010, when Aaron was just 21, Mr. Cummings was convicted for domestic violence against Aaron’s mother for slashing her face.

We’ve heard the rest of Aaron’s story: his troubles at Florida, drug abuse, violence and murder.  Some, like Dan Wetzel, call Aaron a “monster,”  write that he thought only of himself, and say he chose “evil.”  Most people will only see Aaron for his crimes and define him as a gangster, a thug, a murderer.

Surely, Aaron Hernandez’s personal responsibility should not be minimized nor should his acts of horror be justified.  The loss of life of his victim(s) and the trauma inflicted on their families should not be forgotten or overlooked.  That said, we don’t stop to consider what lies beneath the surface, the narrative behind the crime(s), the tale of transformation from innocent child to Aaron Hernandez, the convicted killer.  Instead, we just judge, condemn and lock away for life with no hope for redemption.

When we choose to get close, when we dig past the labels, when we seek to understand but not justify, we see Aaron’s humanity.  We see his story, his suffering: the loss of his father, the sudden upheaval in his family, an adolescence clouded by chaos. All together, a series of traumas colliding, sending him barreling down ugly paths of drugs, poor impulse control and violence.

When I see Aaron, I see my homicide clients.  When I look at them, I don’t see monsters.  I see broken, unhealed souls.  I see allegedly monstrous behaviors by people who were all children once, lives marred and complicated by turmoil and tragedy.  When I get close to my clients, when I converse with them for hours in jailhouse interview rooms, when I sit next to them in the courtroom, when I whisper in their ear, when I pour them a cup of water, when I touch their hand, when I hand them a tissue to wipe a tear, when I trade notes with them, when I adjust their collars and tie their ties, I feel their flesh, intimately experience their beings.   When I meet their families, when I walk their childhood neighborhoods, when I read their records, when I learn more about them than they even know themselves, I don’t just see the conduct.  Instead, I see context.  I see and experience their stories, their journeys to the penitentiary marked by poverty, abuse, domestic violence, drugs, death, absent parents.  I see the terror of incarceration.  I see their humanity.

In fact, the day before Aaron’s death, I had jarring conversations with two respective homicide clients during visits at our local Santa Clara County Correctional facilities.  The first sat shackled across from me and lamented about the impact of the jail time he’s served thus far.  He vulnerably shared that he cannot unsee what he’s seen, grieved his loss of loved ones while locked up that he can’t touch again, expressed his fear that more will pass before he gets released, recounted his scars of incarceration.  A beautiful, heavy gift of intimacy from my client to me. Perhaps Aaron grieved, feared and hurt just like my client.

Later that day, I sat with a younger client who said he no longer called or wrote family or friends on the outside.  When I asked why, he said he wanted to be mentally free from reminders of life outside his four walls, that cutting off contact helped him avoid the trauma and pain of hope. He chose to acclimate mentally to his current status and condition himself for a potential lengthy, if not life, sentence.  Profound insight and foresight for a young person but also a morbid, sad state of mind induced by the realities of our sentencing schemes.  Maybe Aaron had similarly cut himself off from connection, resigning himself to his fate of toe tag parole (dying in prison).

As the conversation continued, the young man asked me if my job was hard.  I sighed and said yes.  I told him it was a burden to represent him.  Not because he was difficult or because of what he allegedly had done.  I confessed that it was emotionally taxing because I had gotten close through conversations like these, because I saw and knew him intimately, because I one day wanted to walk with him together as free men, because of the weight of responsibility for his life cutting into my shoulders.

Losing Aaron is like losing these clients, the jail interview room now empty, the courtroom chair next to me vacant, my desk phone no longer ringing.  A soul lost to trauma, to our machine of incarceration and to misguided notions of justice in the form of life sentences, a soul leaving scorched earth and broken beings behind.

When I see Aaron, I don’t just see my clients.  I also see me.  16-year-old me. Rushing to the hospital to find my dad dead from a sudden heart attack,  shattering my innocence.  My family life, once stable, rocked into chaos. Forced to grow up and become a man much sooner than I wanted or expected. Unready.  Instead, broken and traumatized, buckling under the new-found pressures that engulfed me, sometimes resorting to unhealthy alternatives to patch the hole in my life.  Albeit with differences in manifestation, I was Aaron Hernandez and he is me.  Two children struggling to cope with the loss of our anchors, two broken boys thrust into manhood, two injured spirits.

Losing Aaron to suicide is like witnessing my own mini-death, a blow to my hope and belief in redemption, a haunting reminder that sometimes the world, including ourselves, will forever only see us (me) for our (my) worst moments and nothing more.

Share:
Tags:Aaron HernandezMurderPublic Defender
Previous : TODAY: Vanguard Monthly Conclave: What Should Davis Do About Commercial Cannabis?
Next : Lawyers for Immigrants: Why California Must Lead the Way

16 thoughts on “Guest Commentary: Aaron Hernandez, My Clients and Me”