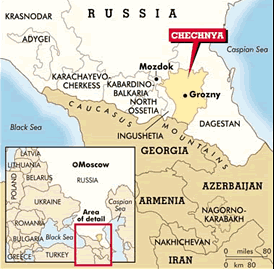 by Jerika L.H., reporting from Europe

The small region of Chechnya has been under global examination as people around the world have recoiled in horror amidst emerging news that gay men have been rounded up and imprisoned in labor camps. As the horrendous details continue to emerge, it is important to note that human rights violations have been part of an ongoing campaign to quell Chechen dissent.

Chechnya is said to be home to around one-million people, made up of two main religious groups: Russian Orthodox Christians and Sunni Muslims. Situated in the Caucus mountain region in south-western Russia, Chechnya borders the country of Georgia and has its own distinct cultural identity, with both the Chechen and Russian language in use.

In a historical nutshell, Chechnya has been embroiled in war for several centuries. The region was overtaken by the USSR in 1921 and endured a cruel deculturization regime. In 1944, Stalin ordered the total deportation of the entire Chechen ethnic community, who were moved to gulags in Siberia and Kazakhstan. Surviving members returned 13 years later to reclaim the region as their ethnic homeland. After the disbanding of the Soviet Union in 1991, Chechen leaders announced their demands for independence and an end to Russian oppression. The Chechen-Ingush ASSR (Autonomous Soviet Socialist Republic) was then divided into two parts: the Republic of Ingushetia and the Chechen Republic, which has been continuously fighting for independence. After First Chechen War with Russia in 1996, Chechnya gained de facto independence as the Chechen Republic of Ichkeria. However, Russia once again gained control of the region after the Second Chechen War. Since the destructive era of the 1990’s, war-torn Chechnya has been on a slow path to rebuilding their infrastructure, although the fight for independence still rages on as separatist movements are still strong amidst Chechen patriots. Russia has sent troops to invade Chechnya multiple times in violent military missions deemed “anti-terrorist operations.”  Russian powers have proven to be no match for Chechen guerrillas, who have mastered the Caucus mountain terrain. Many groups still remain in the mountains where they are continuing their counterattacks against Russian occupiers. Russia announced an end to their “anti-terrorist operations” in April of 2009 after increasing pressure from human rights organizations. Information about the atrocities committed by Russian troops are still coming to light. In 2001, a mass grave filled with countless mutilated bodies was found. This invoked a larger investigation from human rights group into countless murder cover-ups which forced many fleeing Chechen people to Europe to escape.

Although the exact number is unknown, a conservative figure states that at least 200,000 Chechens have lost their lives amidst ongoing post-war conflict, in addition to over 140,000 displaced by violence. The constant threat of death and physical destruction of the country has also made life hell on Earth for those still living in the region. In retaliation against a 1999 Chechen rebel bombing attack, Russia captured and demolished the capital city of Grozny, which still remains in partial ruins. Suicide bombers continue to launch attacks against Russia in an attempt to demand freedom for Chechnya as well as bring global attention to the Russian occupation and genocide of the Chechen people.

Ramzan Kadyrov was appointed as the Head of the Chechen Republic, much to the discontent of many Chechen people, some of whom have called him a Russian sympathizer.  As Russian born human rights activist Yulia Gorbunova states “With the Kremlin’s blessing, Ramzan Kadyrov has been running Chechnya for close to a decade as his own fiefdom, eradicating all forms of dissent. Abduction-style detentions, enforced disappearances and torture are rampant. Russian law and human rights protections exist only on paper; Kadyrov’s orders determine the rules applicable to Chechnya’s daily life.”

Kadyrov has faces countless accusations of torture and murder, as people who opposed his appointment have been found mysteriously disappeared or murdered, including a number of Chechens living abroad. Several people within his regime have also testified that Kadyrov has crafted a “Murder List”, with over 300 names of those who have challenged his authority. The Chechen people are watched with the utmost scrutiny, as officials document the names of those participating in public critique of Kadyrov. Kadyrov’s spokeperson Alvi Karimov shocked the world earlier this week when he called the reports of LGBTQ torture an April Fools Joke –  “absolute lies and disinformation.” Alvi went on to deny that non-heterosexual people even existed in Chechnya. “You cannot detain and persecute people who simply do not exist in the republic. If there were such people in Chechnya, the law-enforcement organs wouldn’t need to have anything to do with them because their relatives would send them somewhere from which there is no returning.”

As the plight of the gay Chechens has galvanized the call for an intervention in the area, many Chechen people state that this form of brutality is nothing new, nor are they the actions of the true Chechen community.  Malissa Holland expands on this sentiment

“I wholeheartedly believe that such actions do not reflect traditional Chechen culture or the views of our people. Innocent people have been persecuted, tortured and killed under the Kadyrov/Putin regime in Chechnya for many years now, and Kadyrov’s crimes against humanity and the atrocities he commits in order to maintain his dictatorship in Chechnya are very well documented. He has shown that he will use any means to stifle any dissent within Chechnya, and he has always been fully supported in his actions by Putin and the Russian government. The reported atrocities committed against homosexuals are only the tip of the iceberg when considering the behaviour that Kadyrov and Putin’s regime has been allowed to get away with.”

Holland was born into a community of Chechens in Jordan, but now lives in the UK. She remarks that traditional Chechen culture is based on a clan system with an elders’ rule. In regard to the lack of religious freedom, Holland states that fear is a huge factor which has kept people quiet about their oppression for so long.

“[Certain groups of] Chechens are traditionally very moderate Muslims, having only adopted Islam in the past couple of hundred years or so. Our previous pagan beliefs and traditions are still evident in our language and some of our customs. In recent years, Kadyrov’s regime has enforced a much more conservative form of Islam, and has introduced strong elements of Sharia law in Chechnya. This is not popular with the Chechen people, but people are too afraid to speak or act out against it.”

The Chechen diaspora has recently taken to social media in an attempt to remind people that the emerging stories of anti-gay violence in Chechnya is not just an LGBTQI issue, but part of a larger operation of genocide which has been implemented since the early 20th century. One commenter states “Please, don’t be so naïve to think that the only problem in Chechnya is anti-gay sentiment. This is only a small stroke on the larger canvas of Chechen inhalation. The Chechen people are not only forbidden to love who they want, but not even given the right to live freely, to speak their opinions, or to participate in their government. A Chechen life is seen as lesser, so people live with constant fear that they could be killed in an instant with no justice or reparation. If you want an end to gay rights violations, it must come alongside an end to the longstanding cruelties endured by the Chechen people for centuries. In order to achieve this, Chechnya must be free.”

Another Chechen woman writes: “I’m so angry that the media has dubbed these abuses as an act of the Chechen people, when it’s really part of an ongoing campaign headed by Putin to trick the world into thinking that we are terrorists and criminals. It is not Chechen people behind this! We just want peace for once!”

Share:
Previous : Path to Guaranteed Health Care for Everyone
Next : ACLU Files Suit Demanding Documents on Implementation of Muslim Ban