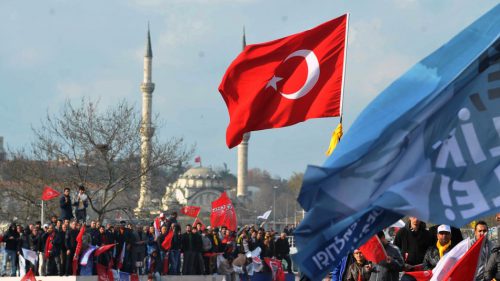 by Jerika L.H, reporting from Europe

Although official numbers will not be in for ten days, initial ballot counters have confirmed that Turkish President Recep Tayyip Erdogan has emerged victorious in a hairline 51% win which will grant him new executive powers. The “Yes” vote will commence a shift away from the Parliamentary system towards a Presidential Republic.

Erdogan campaigned hard both domestically and abroad for the “Yes” vote, specifically asking for support from Turkish communities living in Germany and the Netherlands- two countries which banned Turkish officials from giving pro-Erdogan tours.

The Turkish President promised the new changes would streamline operations and hasten policy implementation by circumventing Parliament, an entity which Erdogan has regarded as a hindrance to Turkish progress. The outcome of the referendum will be a turning point for Turkey, as many of Erdogan’s political plans will render the country ineligible for membership in the European Union.

Among these being Erdogan’s promise to restore the death penalty- a move that would further tensions between Turkey and Europe.

Many within Erdogan’s opposition worry that the decision will give him untrammeled power which could morph into a dictatorship. The “Yes” vote will enact several constitutional amendments which would allow Erdogan to personally appoint the vice President, government administrators, statesmen, and ministers, as well as hand pick half of the country’s highest judicial officials. He will now be able to declare states of emergency, enact executive orders, and issue official decrees.

Turkey is currently embroiled in political turmoil on multiple fronts. The country is enmeshed in a revived war against Kurdish militants while being simultaneously targeted by Isis, all while navigating their role in the nearby Syrian conflict. Turkey is still in a tailspin over the failed government coup in 2016, which led to Erdogan’s highly critiqued move to arrest and suspend of over 140,000 insurgent sympathizers- many of whom were public servants.

Shortly after the referendum results were released, supporters of the “Yes” vote took to the streets to celebrate the outcome. Erdogan’s supporters have hailed him as a populist leader who has fought against secular elites for the interest of working class and middle class Turks, reviving a sense of religious pride through his moderately Islamist government against the country’s previously Western-leaning trend. He is regarded by some as the catalyst for recent economic prosperity, as he is said to be behind a number of infrastructural projects which developed roads, and built schools and hospitals in impoverished rural areas. However, despite his unofficial title as Turkey’s working class hero, the demographics of the referendum vote show a polemic divide between urban and rural. The “Yes” vote came primarily from conservative, religious Turks living in provincial areas, while Istanbul and other civic centers were shown to be staunchly against the referendum.

Those who oppose the President’s authority have called the vote outcome another move towards total authoritarianism, citing Erdogan’s campaign of media intimidation, internet censorship, and the 2014 electoral fraud as points of concern. In Turkey, insults against the President are punishable by a jail sentence. A 2016 Bloomberg News report confirmed that “more than 2,000 [criminal] cases have been opened against journalists, cartoonists, teachers, a former Miss Turkey, and even schoolchildren in the past two years.” Erdogan’s crackdown on academic critique of his leadership has raised fears for the future, as many claim the new referendum will only intensify the vilification and persecution of his opposers, who will be unable to freely express dissent without fear of retaliation.

All in all, the marginal win has showcased just how polemic politics have become, as Turkey now stands internally divided. It remains to be seen how Erdogan’s win will affect the stability of the country, teetering on the brink of rupture.

Share:
Previous : Monday Morning Thoughts: More Calls for Housing Plan
Next : Analysis: Can We Elevate the Level of Dialogue?