Special to the Davis Vanguard

The Woodland Monsanto plant is the world’s largest Biotech seed facility in the world, said protestors, noting that Monsanto controls 92 percent of the world’s seed market and conducts genetic engineering (GE) which produces genetically modified foods (GMOs), which opponents charge are linked to food markets and an array of health and safety issues.

Those arrested were protesting Monsanto’s “chemical empire, including glyphosate-containing “Roundup” that world regulatory groups claim hurt the environment and human health. There were similar protests around the world against Monsanto in about 400 cities this past week.

About four dozen protestors, hailing from the Bay Area through Yolo and Sacramento counties and the Auburn/Grass Valley region, began the protest about 4 a.m. in front of the Monsanto facility. Within minutes they linked arms at the entrance.

The 10 were arrested on four misdemeanor counts, including resisting/obstruction arrest, unlawful assembly and blocking parking. After six hours, they were released without bail from the county jail with an Aug. 22 court date.

One man appeared to suffer significant and disfiguring injuries to his arms and wrists after the arrests. 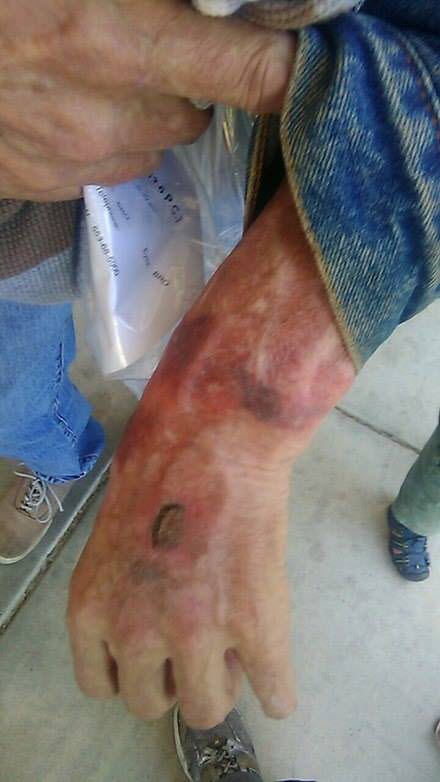 “The World Health Organization has already determined Monsanto’s Roundup to be a probable carcinogen within the food supply.  Glyphosate has been detected in groundwater supplies and 60-100 percent of rainwater collection samples in various parts of the world, inciting concerns of mass pollution on a global scale,” said Bob Saunders, one of those accidentally arrested when deputies “swept” the area and arrested  anyone and everyone.

Saunders said glyphosate is the most widely used pesticide in California and in the U.S., where nearly 300 million pounds were used in agriculture, primarily because of GMO inspired crops. In 2013, 10 million pounds was used in California, with half sprayed in eight of the state’s poorest counties on farm fields, lawns, gardens, school grounds, and parks – five of those poorest counties being in the south Central Valley.

Saunders said banning glyphosate would be “a good start towards controlling the poisoning of our fertile farm fields and protecting our children and families from this menace.  No school grounds where children lunch and play, no public parks where children and families lunch and play, should ever be subjected to glyphosate and other pesticide and herbicide spraying.  There are much safer and sensible alternatives that can be used.”

“Monsanto’s claim of ‘feeding the world,’ is a hoax and corporate propaganda. Monsanto is poisoning the world and harming people with the massive use of glyphosate, other herbicides and insecticides, genetic engineering of seeds, and much more.  Our entire food supply system is at risk and we must act quickly to stop further damage,” said Faygo, spokesperson for the Anti-Monsanto Project.

The Vanguard has received the following statement from Monsanto:

The more than 20,000 people of Monsanto are committed to having an open dialogue about modern agriculture and how food is grown as we focus on using digital tools, data and research to find solutions that balance the need to feed people and protect the planet – we’re proud of the work we do, and we’re eager for people to know more about us. Through innovation and collaboration with farmers and partnering organizations, we develop new tools that help the world’s farmers grow food using less of the earth’s natural resources. We know people have different points of view on these topics, and it’s important that they’re able to express and share them.

Share:
Tags:ArrestsEnvironmentMonsantoProtests
Previous : Urban Retail: Towards a Balanced Approach
Next : Commentary: On the Need for Economic Development