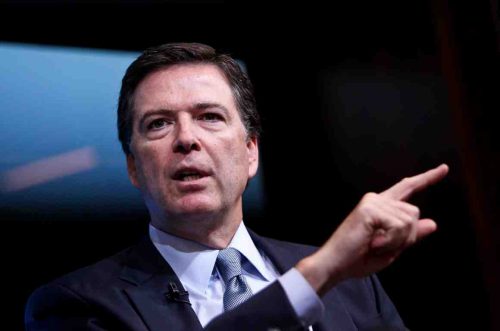 May 9, 2017 — has the potential to be one of the most consequential days in the history of the United States and our experiment in constitutional democracy since the Watergate scandal brought down President Richard Nixon. As with Nixon, we have the specter of a president using his formal constitutional powers to obstruct an investigation into potential criminal activity connected to the president’s campaign. And like Nixon, Donald Trump’s actions threaten to place the president above the law.

They demand a strong response to preserve our constitutional values.

A little after 5:30 p.m. on Tuesday, reports flooded in that President Trump had summarily fired FBI Director Jim Comey for his mishandling of the Clinton email investigation. This rationale, however, is hard to believe, considering he was leading the only serious investigation into whether members of the Trump campaign helped the Russian government interfere in November’s election to their boss’s advantage. We know the White House’s explanation is highly suspicious because of Trump’s own words as well as the sordid happenings behind the scenes in the run-up to yesterday’s dismissal of Comey, which are now spilling out of Washington and into the news.

After all, in late October, Trump praised Comey for reopening the Clinton email investigation after criticizing the FBI director for failing to press charges against her in July of last year. And according to press reports, the case against Comey was built by Attorney General Jeff Sessions, who had to recuse himself from the FBI’s Russia investigation due to his ties to the Trump campaign and his own meetings with the Russian ambassador to the U.S. before the election — which he may have lied about at his confirmation hearing. And today, The New York Times reports that just days before his firing, Comey asked the Justice Department for more resources to conduct his investigation into Trump campaign ties to Russia.

To be clear, we’re not in impeachment territory yet, but the parallels to Nixon are striking and deserve further investigation.

As the evidence of executive corruption mounts, the ACLU is calling for the Justice Department to appoint a special prosecutor to independently investigate the Trump campaign’s ties to Russian interference in November’s election and for Congress to create a select committee, akin to the Watergate select committee, to ensure an adequate and public resolution of this crisis. This, no doubt, will give rise to two straightforward and necessary questions: How does the investigation affect American civil liberties? And why does the ACLU have a dog in this fight?

These are good questions that deserve answers.

President Trump’s actions yesterday to get rid of the person who represented a clear and present danger to his presidency only further demonstrates that he has nothing but contempt for the rule of law and its most sacred motto: “No one is above the law.” This has been obvious. We saw it coming a mile away.

Once it became apparent that Donald Trump would be the Republican nominee for the president, we took him at his word. After a thorough constitutional analysis of his campaign statements and promises, we concluded that he was a “one-man constitutional crisis.” And he’s only lived up to our description in his short time in office by imposing a Muslim ban and then criticizing the judges who ruled against him, revoking civil rights guidance for transgender students, and tapping for attorney general a man hostile to voting rights and constitutional policing. In four short months, Donald Trump has consistently violated the individual rights of people inside the United States, often the most vulnerable among us.

He is a leader who wants to operate without any constraints, and whose campaign is under investigation for potentially colluding with the Russians to undermine the integrity of our electoral process. That’s why a truly independent and credible investigation is necessary to assure the American public that the president or his campaign staff hasn’t violated the sanctity of our electoral system. I applaud members of Congress like John McCain who understand this isn’t a moment for partisanship but rather a time for bipartisan commitment to checks and balances.

The ACLU has faced decisions like this before. During the Watergate scandal, the ACLU and its affiliates were split over whether the organization could or should call for the impeachment of President Richard Nixon. Some feared it would look partisan, but others pushed forward for fear that Nixon could destroy the Bill of Rights.

Through internal debate, the proponents of impeachment won the day, and on September 29, 1973, the ACLU board of directors called for the impeachment of President Nixon. The resolution, passed by a 10-to-one margin, said: “There is now substantial public evidence of President Nixon’s participation in high crimes and misdemeanors, and these acts have violated the civil liberties of people of the United States and the rule by law.”

To be clear, we’re not in impeachment territory yet, but the parallels to Nixon are striking and deserve further investigation.

When the rule of law breaks down, as it did during the Nixon era, individual rights are endangered. This is a lesson we learned back in October 1973, when the ACLU made its case for impeachment publicly in a New York Times ad: “Richard Nixon has left us no doubt. He means to function above the law.” Donald Trump is heading towards similar ground. It’s time for a special prosecutor and select committee to get to the bottom of the Trump campaign’s ties to Russia before the president further undermines the democratic norms and principles that make America great.

18 thoughts on “ACLU Supports the Appointment of a Special Prosecutor”