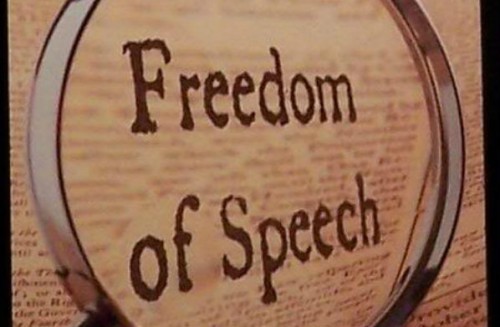 Earlier this week, we ran the article from the ACLU, “Free Speech Is There to Protect the Weak.”  One of our conservative readers lamented, “Nowhere today are free speech rights being denied at a more elevated level than on our nation’s campuses.  I haven’t heard the ACLU stepping up to protect these conservative speaker’s rights.”

If you understand the subtext of the ACLU – I think that is precisely what the piece is getting at.  But their target audience is not conservatives already convinced that college campuses are the problem, but rather liberal ones who unfortunately seem to need to be convinced that free speech protects them rather than exposes vulnerable populations.

This calendar year, I have given a number of guest lectures at UC Davis on the subject of freedom of speech.  While I’m often delivering this message to international students, the counter-arguments by the students are relatively similar to arguments you hear elsewhere.  There is a belief that allowing so-called hate speech – you can think of it as the standard repartee of  Milo Yiannopoulos or Ann Coulter – puts vulnerable populations at risk.

And before you dismiss that notion outright, as we saw with the Islamic Center of Davis, the rise of hate crimes against Muslims, and now the stabbing on a Portland train, there is something to that fear.  It should not be dismissed outright.  Angry rhetoric does have consequences, and my conservative readers will likely point out the reverse as being true as well – and that just goes to bolster the point I am making here.

The irony is that my defense of free speech has opened me up to the accusation that, as a privileged white male, I am shielded from the impact of such hate speech.  That accusation was made here in the comment section of the Vanguard earlier this year and it was made more subtly in some of the classes I have taught.

But hate knows no bounds.  A few days after that question was raised, I received my own hate calls for questioning the Davis police.  Synagogues in my community have been vandalized with swastikas and the impact of immigration policies are felt by my children and their friends.

While we have made great progress on LGBT rights, the LGBT community in general and the transgender community in particular not only feel vulnerable, but are vulnerable.  It was a moving moment last week at our event to see the father of a transgender child break down – this man is an experienced lobbyist, and yet working on legislation to help his own child is clearly very emotional for him.

The vulnerability of a transgender child, the awkwardness of a simple task for most of us – selecting the appropriate restroom – underscores that, for many, there is a feeling of vulnerability and susceptibility to hate rhetoric.

So I fully believe that the ACLU piece is aimed at addressing these issues, but in an indirect way to demonstrate that freedom of speech is paramount to the protection of the rights of minorities.

As Jay Stanley puts it, in “rereading the story in light of my work at the ACLU, I’ve been struck by the injustice not only of segregation, ‘separate but equal,’ and the deprivation of voting rights, but the key role that egregious violations of free speech rights played in Southern officials’ opposition to the movement.”

He adds, “It’s a reminder that when you mess with First Amendment rights, it’s ultimately the weak and powerless who lose out the most, even when those rights do sometimes protect the powerful.”

This is a key message that I try to get across in my lectures.  I tell it through a recitation of the Free Speech Movement at Berkeley and the shooting at Kent State.  It was not long ago that college campuses were clamping down on the free speech of the left – the anti-war movement and the civil rights movement, rather than what they are doing now in fighting the Milos of the world.

The test of civil liberties is during the trying times.  The point I make in my lectures is that any tyrannical government will allow you the “freedom” to sing their praises.  The test is whether they will permit dissent.

Mr. Stanley notes that “it is in times of political turmoil and conflict when our civil liberties really get tested — when angry people who want to change the world hit the streets in protest, and others, such as police officers and other officials, feel contempt and hatred for those doing the protesting.”

This is not a popular subject.

Recently we saw Notre Dame students walk out as Mike Pence gave the commencement address.  Heck, we even saw middle school students do the same for House Speaker Ryan.

This prompted CNN’s Fareed Zakaria to say that “though many liberals think they are tolerant, often they aren’t.

“American universities seem committed to every kind of diversity except intellectual diversity. Conservative voices and views are being silenced entirely,” Mr. Zakaria said.

“The word liberal in this context has nothing to do with today’s partisan language, but refers instead to the Latin root, pertaining to liberty. And at the heart of liberty in the Western world has been freedom of speech. From the beginning, people understood that this meant protecting and listening to speech with which you disagreed,” Mr. Zakaria argued.

That means, he said, not drowning out “the ideas that we find offensive.”

In addition, Mr.  Zakaria noted what he called “an anti-intellectualism” on the left.

“It’s an attitude of self-righteousness that says we are so pure, we’re so morally superior, we cannot bear to hear an idea with which we disagree,” he said.

“Liberals think they are tolerant but often they aren’t,” he added.

How do we reconcile the importance of free speech rights versus the concerns of vulnerable minorities?

I come down where Jay Stanley does: “It’s a reminder that when you mess with First Amendment rights, it’s ultimately the weak and powerless who lose out the most, even when those rights do sometimes protect the powerful.”

As a journalist I think the answer is to expose the powerful for what they are.  The weak are only preyed upon when we have silence and do not shine the light on what is happening.

The lessons of the Islamic Center of Davis and the Portland stabbing are actually also the flipside of this.  In Davis, the offender’s choice of attacking the mosque failed to divide the community.  Instead, it brought  the community together in a show of solidarity and love that ultimately overwhelmed the hateful message of Ms. Kirk-Coehlo.

The tragic lesson of Portland is that what happened last century in Germany will not occur in this great nation.  Because when they came for the Muslims, three brave men stepped forward to put their lives on the line to say no.

The answer to hate is not to silence it, it is to fight against it, to put our lives on the line, and to conquer with an overwhelming message of love.

Share:
Tags:ACLUFree Speech
Previous : Black Lives Matter-Sacramento Activists Avoid Prosecution for Occupation of City Hall
Next : The Vanguard Needs 98 People to Donate $10 a Month – Can You Be One of Them?

41 thoughts on “Commentary: Why Free Speech Protects the Weak Even When the Powerful Benefit At Times”