In 2006, Davis was ahead of the curve as it debated police oversight and ultimately calmed tensions through the hiring of a police ombudsman, now a police auditor.  Bob Aaronson, along with a change of leadership at the Davis Police Department under first Landy Black and then Darren Pytel, reduced its number of citizen complaints from 40 in 2007 down to 5 in 2015.

However, Mr. Aaronson, who was hired in 2006, has announced he is leaving the department at the end of his contract at the end of June.  At the last city council meeting, the council agreed to put an item on discussion for a possible civilian component to police oversight.

Mr. Aaronson is not even out the door, however, before the first real crisis has hit the department.  Things have been fairly quiet the last few years, after some incidents like the “mowing while black” occurrence where a 67-year-old African American gentleman was approached while he was mowing his lawn in West Davis, after police had vague reports about a potential burglary suspect.

Prior to that, there was the Taser incident at Glacier Point, where two UC Davis students were Tased by a Davis police officer.  A citizen complaint came back sustained, and Officer Nicholas Benson would be terminated by the department as the result of his actions.

Now, as the debate over police misconduct continues to burn hot across the country, Davis will be confronted with the Picnic Day incident.  Initial accounts from police had a mob attacking officers and beating them and kicking them on the ground.

Video acquired by the Vanguard calls that account into question.  The two most serious questions at this time appear to be why an officer can be seen putting a woman into a headlock and potentially punching her.  An attorney for a second man believes his client was punched from behind as he watched the confrontation unfold.

Others have questioned why Davis would send plainclothes officers to deal with a Picnic Day situation, which called for visibility and lack of ambiguity.  Witnesses claimed it was unclear at best who the men were that were described as entering the scene in an unmarked van and shouting profanity.

Davis needs an independent body to investigate this matter, but that is at least in some question, with the police auditor on his way out the door.

Meanwhile, Davis is not alone – the Vanguard last week covered two other local police incidents.  In February, Michael Barrera, 30, of Woodland was confronted by officers after he was allegedly acting erratically.

The coroner’s office released their autopsy report, concluding that the cause of 30-year-old Michael Barrera’s death, following being Tased by Woodland police officers, “was sudden death with methamphetamine intoxication during restraint by law enforcement.”  However, the “manner of death was classified as Undetermined.” 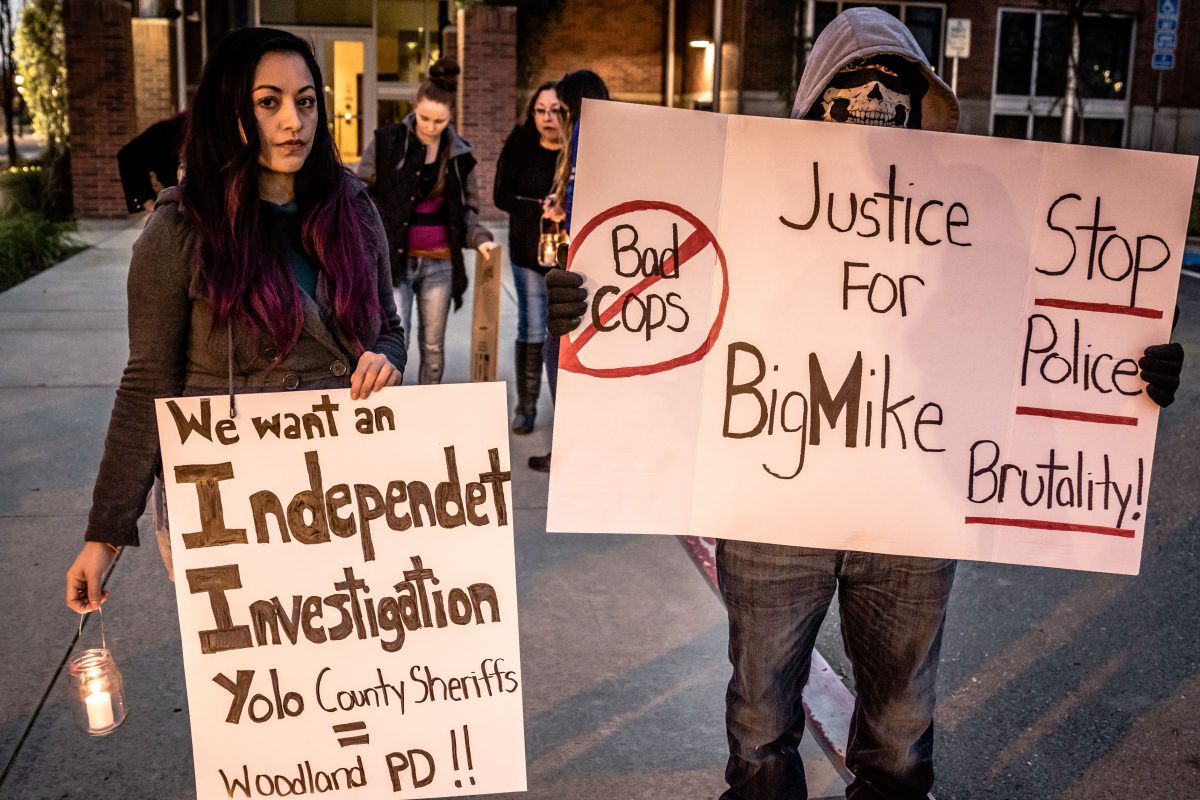 Following the release of that report, long-time Sacramento civil rights Attorney Stewart Katz, who specializes in police use-of-force cases, said he was surprised by the vagueness of the report and told the Vanguard there is nothing in this report that will convince him not to proceed with a federal civil rights lawsuit.

Mr. Katz has followed through on that assessment, filing a Government Claim for Damages with the City of Woodland and the Yolo County Sheriff’s Office.  A government claim is the necessary precursor to a lawsuit once the entity, as they generally do, denies liability.

In the claim against Yolo County, Mr. Katz writes, “Michael Anthony Barrera was killed (February 8, 2017) by law enforcement, including, it is believed, officers from the Yolo County’s Sheriff’s Office.  Decedent was experiencing a mental health emergency at the time and not presenting a credible threat to the officers or anyone else. The officers used unreasonable force, including a taser, causing his death.”

It continues, “The County is vicariously liable for the conduct of its employee deputies and is responsible for the inadequate training and supervision, which was also a cause of decedent’s death. Their involvement is evidenced by Yolo County Sheriff’s Office Report #17-0355 and Woodland Police Department Report #17-0708.”

Unlike Davis, Woodland doesn’t have an independent investigator, but the city released a statement in February that they would turn the initial investigation over to an independent party for review.

Finally, on Monday of last week, the Vanguard covered the press conference held by John Burris on behalf of Nandi Cain.

The case of Mr. Cain is interesting, as video shows the man apparently lawfully crossing the street, when he was stopped by Sac PD Officer Anthony Figueroa, who then took the bait and got into a physical confrontation and can be seen pounding on Mr. Cain in the street.

The department, in a rare move, publicly condemned the actions of its officer a day after the incident.  “The actions of the involved Sacramento police officer are disturbing and (do) not appear to be reasonable based upon the circumstances,” the department said April 11.

John Burris, along with his legal team, announced that they had filed a federal lawsuit against the City of Sacramento as well as Officer Anthony Figueroa.  “Mr. Cain’s federal civil rights were violated when he was viciously assaulted by Officer Figueroa on April 10.  He was assaulted in such a way that belies decency and commonsense.  He was battered almost to a point of submission on a fact pattern that did not in any way justify that level of force.”

The Nandi Cain incident is just the latest in a string of black eyes for the department.  Last year, officers shot and killed Dazion Flenaugh, but the department cleared the officers of wrongdoing there despite video showing one of the officers calling the mentally ill man a “freak” and suggesting a citizen beat him with a baseball bat.

The case of Joseph Mann in Sacramento also saw the officers cleared, even as they were caught on audio talking about running the man over.  The department settled that case in February for $800,000.

Sacramento Black Lives Matter issued a statement last week, “Thursday, officers who triggered a mental health crisis, released, and then hunted down Dazion Flenaugh, got a medal with an award ceremony for killing Dazion.

“They literally got rewarded for killing a Black man that didn’t have a home, and was suffering a mental health crisis that they induced,” the statement read.  “Who does this to families mourning their loved ones, fighting for their loved one?  Our police department is blatantly rewarding their police for taking our lives!”

Four Sacramento Black Lives Matter “rapid response” demonstrators were arrested about 9:30 p.m. Friday night after occupying Sacramento City Hall for about six  hours. They were arrested for protesting about the Sacramento police officers who were given medals for killing Mr. Flenaugh.

Sacramento Bee columnist Marcos Breton wrote, “In such a vacuum of leadership, bad things can happen – and they have. The recent beating of a young African American man by an inexperienced officer on the ridiculous pretext of enforcing a jaywalking ticket is the latest self-inflicted wound by a department that should be better than this.”

He continued, “There are several reasons why the Sacramento Police Department is mired in a crisis of confidence. There is only one solution to end the crisis: Sacramento needs to hire a new chief from the outside to come in and lead its officers. It would be best if that new chief had no prior connections to Sac PD at all – no longstanding friendships, no previously established perceptions, no sacred cows or hit lists.”

While Mr. Breton looks to Sacramento-specific solutions, it is clear that there is a need for a more systemic look.

Departments across the country are changing everything, from their use-of-force policies to employing body cameras.

But what happened in Davis illustrates the need for more changes.  First of all, Davis has employed a body camera policy whereby the public is not entitled to see the video.  That means, in the case of the Picnic Day incident – the officers had cameras and they didn’t appear to – we would still have to rely on shaky cell phone images rather than being able to evaluate for ourselves.

Second, as mentioned previously, there have to be questions about when and how the officers should have used force here.  We did not see on video the precipitating events – however, the officers, coming in as they were said to have done, may have escalated rather than de-escalated the situation.

Third, did the participants realize they were dealing with police officers?  There are times for undercover officers, but, in broad daylight at Picnic Day, it seems like a time for no ambiguity.

Finally, we are concerned with the situation regarding the police auditor.  Last week, Chief Darren Pytel said, “I am not opposed to oversight” which could include civilian review, but it does have to be in compliance with “complicated laws.”

He is correct, but what is clear is we need to revisit the entire system to make sure that whoever is the next police auditor has access to the files and tools he or she needs to oversee the police department.

Meanwhile, at the state level local Assemblymember Kevin McCarty has introduced legislation that would require the Attorney General’s office to investigate all officer-involved shooting deaths – that is a good start on the state level, but his legislation has been introduced previously and never gotten to a vote.

There is more work to do, as the local incidents demonstrate.

One thought on “Commentary: Local Incidents Punctuate the Need for Police Oversight and Reform”