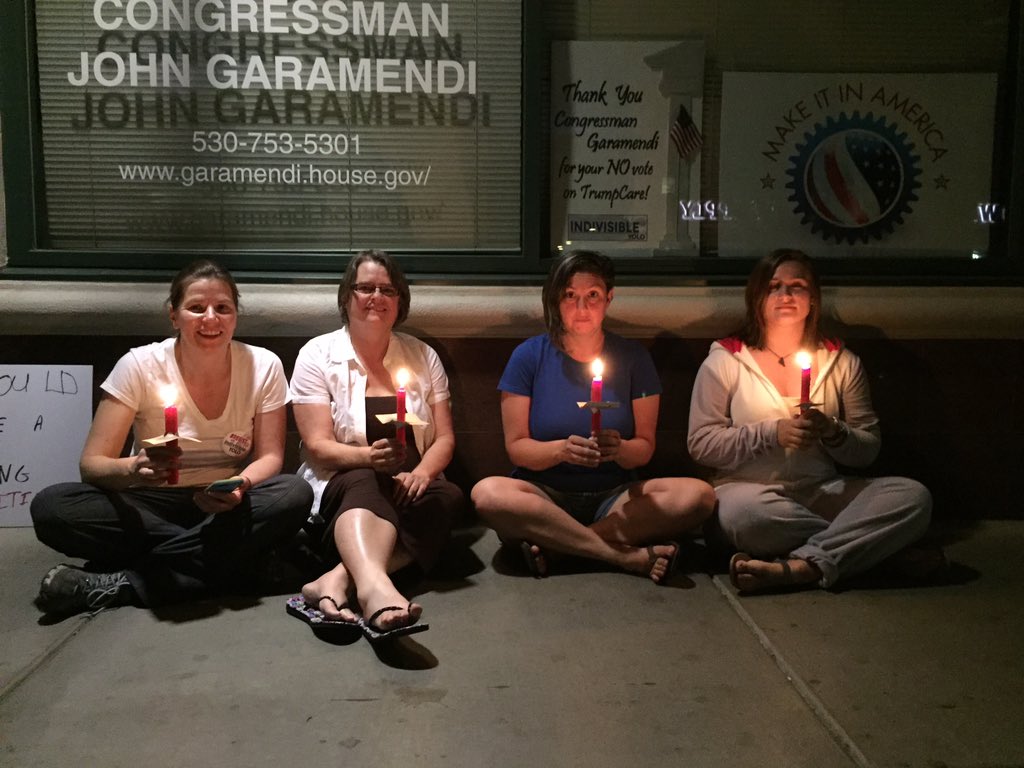 This statement was issued on Thursday morning prior to the repeal of the ACA:

On Wednesday afternoon, Indivisible Yolo received word that the House of Representatives would be voting on the disastrous AHCA bill on Thursday, May 4th. In response, IY rapidly organized an all night vigil outside Representative John Garamendi’s Davis office to support him and to defend the Affordable Care Act.

Rep. Garamendi, a staunch supporter of the ACA, has been steadfast in his opposition to the AHCA. “Garamendi is our voice in Congress and it seemed right that we would gather there to show support for his “No” vote, and to demonstrate to the rest of the country the depth of our concern for the devastating consequences this bill would have,” said Indivisible Yolo member Rachel Beck.

Members started to gather along the G St sidewalk just outside of Rep. Garamendi’s Davis office at 8pm Wednesday evening. More than twenty people participated in the vigil, and many who were not able to attend sent support, including a San Francisco resident who heard about the vigil on twitter and sent pizza, and the CA-04 residents and Indivisible members who tweeted from their vigil outside Rep. McClintock’s offices.

Passersby were overwhelmingly supportive and appreciative of the vigil, many sharing their own healthcare stories. One man happening upon the vigil shared that his diagnosis of leukemia at the age of 4 had prevented him from obtaining health insurance, until the Affordable Care Act required insurance companies to provide coverage for people with pre-existing conditions. His story, along with other video statements, scripture readings, and photos from the vigil, can be found in the IndivisibleYolo Twitter feed and Indivisible Yolo Facebook page.

“This bill is atrocious. It is cruel. I simply cannot believe that something this bad could pass the House of Representatives, but it has.

“This bill will strip 24 million people of their health insurance. It is a crushing age tax for Americans of 50-64 years of age, and will force them to pay up to five times as much as what a 30-year-old would pay for the same coverage. It will destabilize funding for Medicare, taking $75 billion out of the trust fund, and blow a $10 billion annual hole in MediCal. It will practically eliminate the guarantee of coverage for pre-existing conditions, which could affect over 300,000 people in my district. But it will provide a massive, $600 billion tax cut to America’s richest. It is an outright assault on the poor and the sick, and a huge transfer of wealth to the rich. Even worse, the Republican majority rushed to a vote on it without giving the Congressional Budget Office a chance to tell us just how bad it is.

“I served for eight years as the Insurance Commissioner of California. I know exactly what insurance companies will do under policies that gives them free rein, and that’s what this bill does. The amendments that were put on this bill at the last second do nothing to reduce the devastation it will impose on America’s most vulnerable. It is a sad day in Congress.”

Governor Edmund G. Brown, Jr., issued the following statement ahead of today’s vote on Trumpcare – the American Health Care Act – in the U.S. House of Representatives:

“This cruel and ill-conceived bill – the so-called American Health Care Act – rushed to a vote with no fiscal analysis, will hurt American families and it’s bad for California. Millions will lose coverage, those with pre-existing conditions will be abandoned and costs will skyrocket.

“Just look at the districts of Representatives David Valadao (R-Hanford), Jeff Denham (R-Turlock) and Steve Knight (R-Lancaster) where 111,000, 109,000 and 76,000 Californians, respectively, are at risk of losing coverage because of this legislation.

“The fig leaf amendments tacked on in the eleventh hour don’t change this massive assault on so many decent and hard-working people. Our California congressional delegation should vote no on this abomination.”

“I believe health care is a right. Today’s House vote takes a dangerous step towards jeopardizing the health security of millions of people in our state and throughout the country.

“As a Member of Congress, I was proud to help expand health coverage and lower costs for hardworking Americans. Every Member of Congress who voted for today’s bill must answer why it is good to take away an American’s access to his or her doctor. Would they do this to themselves or their family?

“As California’s Attorney General, I will use every legal tool at my disposal to safeguard the healthcare the people of our state depend on.”

“Today’s vote on Trumpcare proves that cowardice must be a pre-existing condition. Kevin McCarthy and California Republicans in Congress chose Donald Trump and Paul Ryan over the needs of their own constituents. They should be ashamed and they must be held accountable.

“Republicans voted to take away health coverage for millions of Americans, they are raising premiums on fixed-income seniors, and removing protections for people with pre-existing conditions. Trumpcare also jeopardizes coverage protections that millions of middle-class families receive through employer-based coverage, and it reduces women’s access to lifesaving care by defunding Planned Parenthood and allowing rape and domestic violence to be considered pre-existing conditions – all to give $300 billion to the wealthiest people in the country.

“This is an ugly day in America.”

“It’s been hard to keep track of all the broken promises during the first one hundred days of this Administration. But this one stands out as the most insidious of the lot. The President promised to improve healthcare for all Americans. He promised that every single American would have better, more affordable coverage than they had before. But now that he’s president he’s more concerned about repairing his bruised ego, no matter the cost in human lives or quality of life.

“This proposal is just a tax cut for the wealthiest Americans masquerading around as a healthcare bill. It will completely undermine the vital protections that so many Americans – Democrat, Republican, and Independent alike – rely on. The so-called American Healthcare Act would rip insurance away from millions; make insurance more expensive; hurt people with pre-existing conditions; and hurt women specifically by defunding Planned Parenthood.

“There’s no way around these facts; President Trump and Republicans in Congress know it. That’s why they refused to wait for the facts to get out before their disgraceful vote today. Trump promised something better. He lied.”