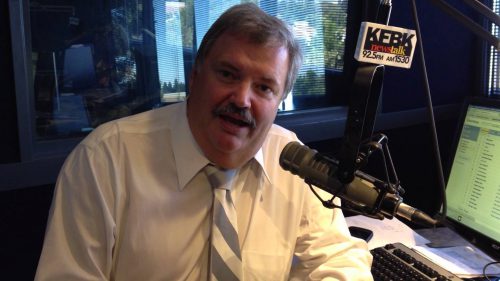 In his radio show on Friday, John McGinness said that our country has done the best at times when “capitalism has been unbridled, unfiltered.”  But then he went on to say, “If you look at certain groups within our broad population, for example, African-Americans in this country did much much much better before the Civil Rights Act.”

He did say that slavery was never defensible, but “prior to the 1960s when the Civil Rights Act came into play and there were efforts specifically undertaken to theoretically prop up one race of people.  African Americans in this country were doing much much better.”

He continued: “Economic growth, intact families, children being raised by both parents, completion of education at least through high school – those statistical data were much much better before the Civil Rights Act.”

I don’t want to get into a point by point debate here, but in 1950, less than 65 percent of blacks graduated from high school – now that number is near 80 percent.

But the accuracy of his specific points aside, 1964 Civil Rights Act was a landmark legislation that outlawed discrimination based on race, color, religion, sex or national orientation.  Among other things it prohibited the unequal application of voter registration requirements, racial segregation in schools, employment and public accommodations.

Is John McGinness really making the argument that black people were better off under legal Jim Crow-style segregation than they were under the post-1964 reforms?  We can debate all sorts of policies used to enforce the Civil Rights Act and things like affirmative action, but to make an argument that the act itself was a bad thing is non-supportable, empirically or otherwise.

This gets to the point we raised last week when it was announced that Mr. McGinness was hired to investigate the Picnic Day incident.

His track record suggests that he has overseen a department with numerous use-of-force complaints, he has opined consistently in favor of police departments in commentary and news interviews, and his comments as a talk show host are not those aligned with Davis community values.

We cited a May 4 radio show where he talked about disproportionate Vehicle Code enforcement in Sacramento – the greater likelihood of being stopped or cited if you are African American.

“That doesn’t tell the whole story,” he explained.  “I don’t see that as empirical data.”

He cited one case of a guy who claimed to have been stopped 30 times in a year on vehicle stops but was only cited two or three times.  He responded, “If you are bringing vehicle code violations to the equation, you should expect that there’s a high degree of probability that you’re going to be stopped.”

He then talked about the Broken Window Theory – the highly controversial theory that by policing low level crimes, you deter larger and more violent crimes.  “Guess what,” he says.  “It seems to have worked.”

Never mind that numerous studies have called this into question, including one from last year that found, “The rate of summonses and arrests for minor quality-of-life crimes like disorderly conduct, public urination and open-container violations had no real impact in driving down felonies over the past six years.”

He cited stats which show that, while only 13 percent of the adult population in Sacramento is black, one-third of traffic stops involve black drivers.  He continued that one in four blacks are stopped, but police have stopped only one out of every 17 white adults annually.

He says that “there are some undeniable factors that present different scenarios in communities based upon poverty, parental influence, education, and at the center of that is often times racial disparity.”  He says that young black people are less likely to have attendance rates and graduates as their white counterparts, “so should it be completely outside the realm of possibility to suggest that there therefore may be different behaviors displayed on the part of young drivers… maybe not because of ethnicity, but reflect disparity because of living conditions, lifestyles, and options with which they’re saddled.”

His views expressed on his show suggest that in the Picnic Day case – which even the Davis Enterprise editorial suggests is less than clear – he is going to side with the police’s account pretty much no matter what.

But leaving that aside, do we as a city wish to employ an individual to investigate an incident involving police and African American youths who has called into question the 1964 City Rights Act?  If we do, this calls into question our very values as a community that says it embraces openness and diversity.  It is a message to people of color, particularly African Americans, that they are second class citizens and not welcome here.

I have received assurances from public officials in this city that the investigation will get fully audited and reviewed by outside and more impartial eyes.  And while I trust that that will happen, I remain perplexed.

Why did Darren Pytel think that hiring the former sheriff, who is expressing views more aligned with Donald Trump and Jeff Sessions than the majority of the Davis population, was a wise course of action?  Did he do it because he thought he would get a more favorable ruling?

There are many qualified retired police officials I would trust to conduct such an investigation – among them former UC Davis Chief Calvin Handy, who for a time actually investigated police complaints for the city of Davis, as well as former Boston homicide detective Ken Williams, whose work on use of force I greatly admire.  Those are just two offhand, there are many more.

Whether we can evidentially get the findings here correct is aside from the fact.  This man should simply not be hired by this city.  And unless the city manager and city council steps in, there will be a crisis of confidence on this side of the divide.

I have seen too many of these police investigations go sideways because of poor process – and Davis hired a police auditor eleven years ago specifically to avoid the kind of perception of a non-impartial investigation that is arising now.

Share:
Tags:Davis PoliceJohn McGinnessPicnic DayRacism
Previous : No Rosy Budget Projections in the Current Model
Next : Monday Morning Thoughts: Are the Students Really Being Treated As Pawns?