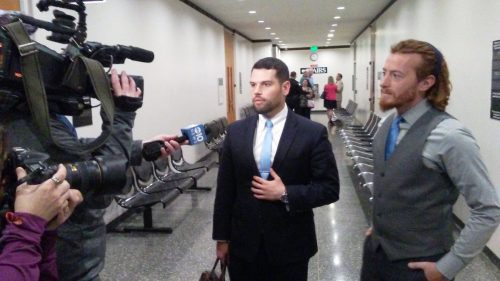 The Sacramento Chapter of the National Lawyers Guild today voiced its opposition to the District Attorney of Sacramento County pursuing further legal proceedings against political activist Sean Thompson, whose felony trial for allegedly assaulting former Sacramento Mayor Kevin Johnson with a coconut cream pie last year was declared a mistrial this past Monday.

The DA’s office will announce whether it will re-try the case at a hearing now set for June 8.

“The jurors in this case have spoken. They could not declare Mr. Thompson guilty of felony or misdemeanor assault or battery after four days of deliberations, and nearly two weeks at trial. NLG Sacramento recommends the District Attorney move on and wisely focus limited resources on much more pressing issues impacting Sacramentans,” said Amreet Sandhu, board president of the NLG in Sacramento.

“Enough taxpayer dollars have been spent in this legal exercise. We need our taxpayer funded judges, court reporters, court clerks, Sheriff deputies and most importantly District Attorneys, who have unbounded discretion regarding which cases to prosecute and which they cannot due to limited county budgets, to do the work they are paid to do rather than litigating a case like Mr. Thompson’s, which was absurdly overcharged,” Ms. Sandhu added.

“Many legal observers noted at the time that when felony charges were lodged against Mr. Thompson that it was overreach, and in fact,  jurors specifically noted that they could not convict Mr. Thompson of a serious felony and voted accordingly, resulting in a hung jury,” said Ms. Sandhu.

Earlier this week, Claire White discussed several procedural errors in the case, including the fact that the jury told the court that they had reached an agreement – all 12 jurors – on the felony Penal Code section 217.1(a), assault on an official, but hung on the lesser included misdemeanor assault charge.

“What that means is that they reached a verdict on Count 1 which is not guilty, but they were unable to communicate that to the judge,” Claire White told the Vanguard.  They kept saying they had a partial verdict.  But the judge never required them to go in and fill out the verdict form.  Instead, “He just declared a mistrial on all counts.”

Because of that, the DA still has the opportunity to retry the felony should they choose.

“We can appeal the decision,” Ms. White explained.  That option is being discussed now.  “There were a number of decisions that were in error, that being one of them.”  They are waiting to see if the DA decides to retry or dismisses in the interest of judgment.

Penal Code section 217.1(a) is actually a wobbler, meaning it could have been charged as either a felony or a misdemeanor.  “When the legislature created this crime, assault on a public official, they necessarily intended that some conduct that meets these standards could or should be charged as misdemeanors.”

She said that “it really blew our minds that the prosecutor, the DA in this case, decided that this conduct was aggravating enough that it warranted a felony.  Particularly in light of the beating that occurred afterwards.”

Claire White pointed out that just one day of testimony with 16 police officers on overtime cost the county in excess of $10,000 to put this trial on.  “An insane amount of resources were used by the county,” she said.

“That they would go through this again speaks to their misaligned priorities of the county in general,” she said.  “That the county would waste its resources to do a second felony trial when they couldn’t convict the first time around – I think that’s silly.”

“We’re ready to fight this again,” she said.  “We’re ready to throw more resources than we did the first time around.”  She said they will not go to trial again without Mr. Thompson having a chance to face his accuser Kevin Johnson, whom they will put under subpoena to testify the next time around.

Share:
Tags:Court WatchKevin JohnsonNLGPie Case
Previous : Analysis: A Look at the MRIC EIR Certification Issue Coming to the Planning Commission
Next : Commentary: Columnist Just Doesn’t Get It on Need for Impartial Investigator