The report concludes, “The average annual shortfall in funding is $7.8 million.”  To put this into perspective, “this amount is roughly equivalent to the current 1% Measure O sales tax, or to a 6.0% utility users tax on power, communications and water/sewer/sanitation services, or to a $270 parcel tax.”

And this is still a low number as the park maintenance cost remains a work in progress.

Here is the chart that shows total unmet needs by year: 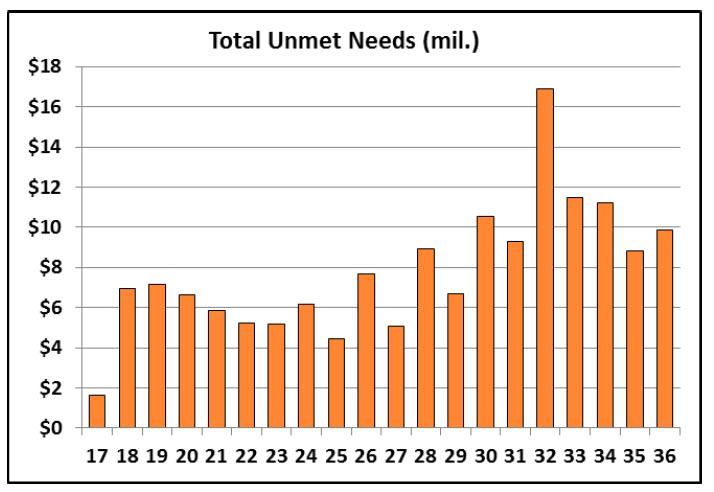 This chart shows the unmet need compared to projected expenses, and to the projected revenues including a range of optimistic to pessimistic revenue growth. 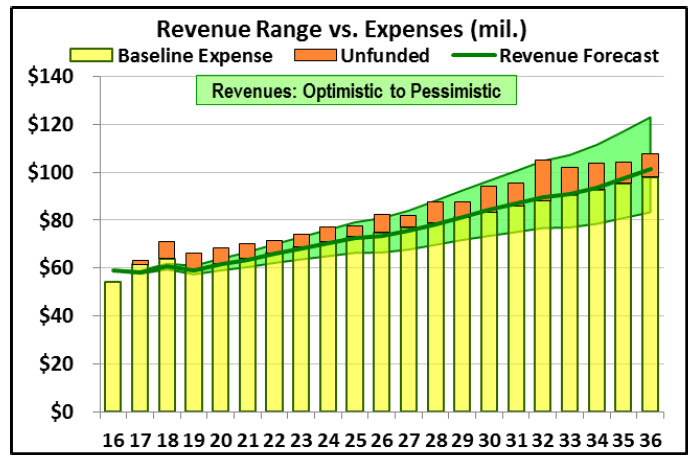 They add, “If revenues are more in the pessimistic range, then not even the projected level of expenses can be sustained – is not reasonable to assume that higher revenue growth will be able to fund these unmet needs.”

Second, “The unfunded portion averages 10% of the General Fund budget. Cutting existing budgets by 10% — a significant amount — to redirect funding to unmet needs, presupposes that the unmet needs are a higher priority than what the City is already doing, which is not likely.”

The source of the city’s budget crunch is not surprising.  Pension costs are a major and ongoing source of trouble for the city.

As staff notes, “[W]e are in the midst of a planned multi-year escalation in employer rates by CalPERS.”  Pensions payments are expected to double in the next six years.

CalPERS (California Public Employees’ Retirement System), as we have reported, has approved a reduction in its discount rate to 7 percent from 7.5 percent and it was previously at 7.75 percent.  Staff notes that “reducing the discount rate results in significant cost increases to employers.”  Moreover, staff writes, “this discount rate reduction to 7.0% will probably not be the last; CalPERS officials have been frank in stating that in February 2018 when this issue is next considered, the CalPERS board may well approve an additional discount rate reduction, which will likely be phased in as well.”

The city projects the discount rate to continue to reduce over time, hitting 6 percent by 2041.  “An ultimate decline to that level may require multiple actions by CalPERS, and may occur over a shorter period of time,” staff warns.

Once again, costs in 2000-01 were under $500,000 when the pension fund was “superfunded.”  Staff projects that payments will peak in about 20 years at $18 million, triple their current level.

The other big portion of this is the infrastructure needs.  In 2016, Nichols Consulting projected a 20-year need of $167 million – or $8.3 million annually.

The chart shows the Street PCI comparing the goal to the result if the streets are untreated.  Currently by the middle of the next decade, the the projected PCI begins to gradually fall to about 60 by FY 35/36. 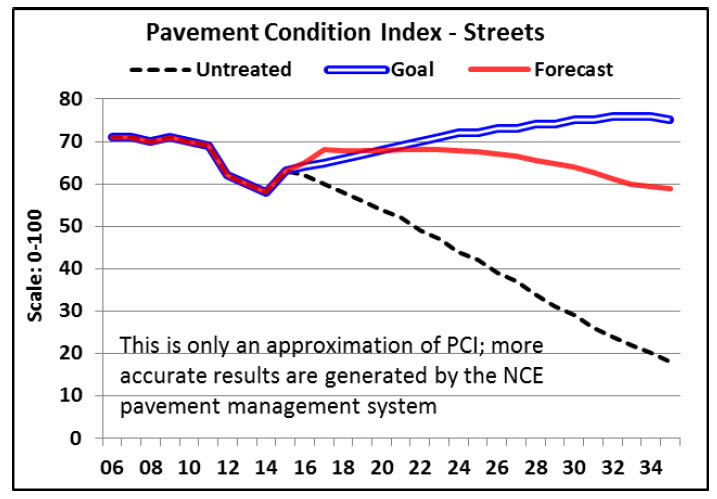 There are also facility costs.  Staff writes, “Kitchell CEM prepared a comprehensive facilities management plan that identified the costs of maintaining and ultimately replacing parks and buildings. They recommended $25 million in maintenance costs over the next 20 years. The forecast projects that 85% of these costs will be met using $1 million in annual General Fund contributions starting FY 18/19.”

As we noted, park maintenance is a work in progress.  Staff writes, “This is a work in progress. Parks and Community Services staff has been updating the Kitchell study to better identify park facility needs. The forecast currently assumes an annual average unfunded need of $555,000 for parks and structures, $100,000 for pool equipment replacement, $175,000 for park irrigation/conservation, $250,000 for wildlife habitat maintenance and $100,000 for urban forestry, for a total of $1.18 million.”

Staff notes, “In addition to infrastructure concerns, the City should endeavor to keep staffing levels per capita relatively constant so that workload increases caused by population growth and other service demands can be adequately addressed. This will avoid diminishing levels of service over time.”

Staff adds, “Currently, most services are provided by City employees, but even if services were contracted for, additional funding will be required over time. The forecast funds one FTE increase a year, although two FTE would be required to hold staffing levels per capita constant over time. Thus, 50% of the $87 million in service increase costs over the next 20 years would be funded.”

City Manager Dirk Brazil summarizes the situation in his transmittal letter to the city council.  “We continue to see stability in our revenue streams, with notable growth in property and sales tax,” he writes.  “Although revenue is currently stable, the City’s expenditure obligations continue to grow. CalPERS announced a change to its pension discount rate over the next three years, effectively increasing the city’s annual pension obligations going forward. While the city continues to fully fund Other Post Employment Benefits (OPEB), also known as retiree medical, those costs will also continue to rise in coming years.”

He continues, “Outside studies show the city needs to commit up to $8.3 million annually toward transportation infrastructure to maintain a suitable pavement criteria index, compared to the $4.4 million proposed for the budget in 2017/18. Finally, the City is in various stages of negotiations with all employee bargaining units, creating some uncertainty related to the 2017/18 budget and beyond.”

22 thoughts on “No Rosy Budget Projections in the Current Model”