The city of Davis is about to embark on redoing its downtown plan and revitalizing retailing.  City Planner Dan Zack will share his experience at 7pm at City Council Chambers.  This is a preview of some of his wide ranging thoughts.  While seats for Thursday event will likely be available, it is suggested RSVP in advance at DFF-VisiontoBricks.Eventbrite.com     For more ideas on downtown redevelopment, go to Zack’s blog at plannerdan.com

Mixed use downtowns were the hearts of our cities for centuries. Early 20th century reformers, emboldened by their successes in zoning dirty industrial uses away from residential areas, decided that commerce was also an unhealthful influence on neighborhoods and began to outlaw the mixing of uses in early zoning ordinances. As the auto age ramped up, commerce often came hand-in-hand cars and traffic, so the urge to separate retail from homes grew stronger. The mixing of retail and residential uses was prohibited in most urban areas for a long time, and it was one of the factors in the long decline of American downtowns.

Jane Jacobs broke with the conventional wisdom and advocated for mixed uses in the 1960s, but it took planners a while to listen. By the 1990s and 2000s urban revitalization professionals realized that mixed use development was something to be embraced. They saw that vibrant downtowns and urban neighborhoods had mixed uses, and that the most fun, active streets were the ones that had shops on the ground floors. Unfortunately, some cities went overboard and required ground floor retail everywhere. Many of the mandated retail spaces sat vacant, because the population of the area just couldn’t support them.

We need a sensible approach to mixed use that reflects realities and limitations of retail, while also maintaining a commitment to vibrant street life. To be successful we need to redefine retail and deploy it in a very strategic way.

A colleague of mine recently pointed out that every project rendering seems to show an Old Navy in it. We are obsessed with getting mall-style retail into our downtowns, and we need to get over it. Successful downtowns aren’t always going to be places where you can do back to school shopping. It’s great when it happens, but it is difficult and rare. Generally, America is over-retailed, and online shopping is shrinking the need for brick-and-mortar shops.

Dining, entertainment, and personal services are areas in which downtowns and other walkable urban neighborhoods can thrive, and malls and the internet typically cannot. We need to expand our definition of retail to include restaurants, bars, coffee houses, nightclubs, salons, theaters, live music venues, and similar uses. The focus should be on businesses that generate and benefit from high levels of foot traffic throughout the day and week. Until somebody comes up with something catchier, I suggest that we call this expanded concept Retail+.

When creating zoning codes for downtowns and walkable neighborhoods, we need to think like mall designers and retailers. We need to pull people through areas strategically based on the science of what motivates people to walk into some shops and not others. Overall, our focus should be on lining sidewalks with active ground floor uses and avoiding dead blank walls.

Here is my suggestion for how planners should code for retail. After struggling for years with ground floor vacancies in Downtown Redwood City, we finally settled on a strategy similar to this, and it worked. We need to think of ground floor uses in terms of three distinct zones:

High Activity Zone: Retail+ uses need to be clustered together in the most visible, accessible, central, and dense part of the neighborhood, which is where they can be most successful. We need to engineer the hustle and bustle that retail+ thrives on and that people love to see on their main streets.

Moderate Activity Zone: Too many urban streets are lined with dead blank walls. These repel pedestrians, hurt property values, and decrease safety. While we can’t support retail everywhere, that doesn’t mean that other areas can be allowed to be lifeless. We still need active frontages in these areas that put eyes on the street, than pull pedestrians through the block, and that generate coming and going activity at the sidewalk.

Flexible Zone: Here we can allow the market to experiment a bit. Retail+ and other uses can be allowed to mix in this zone, and as the heart of the neighborhood gets going, this flexible zone is the ideal place for retail+ to expand into.

Now, here’s a look at how the three zones might look in a hypothetical downtown: 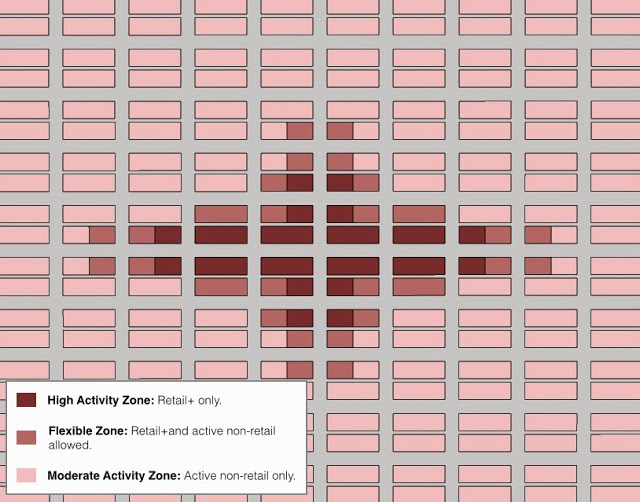 A High Activity Zone should serve a walkable ped shed with a 1/4 to 1/2 mile radius. If your downtown or other urban district is larger than that, you should have a series of High Activity Zones spaced 1/2 to 1 mile apart, each of which serve the surrounding area that is within a 5 to 10 minute walk.

I’ll wrap up this post with some thoughts about entrance frequency. It is sometimes difficult to keep entrances close together, but it really does matter. More entrances means more people are coming and going throughout the day, which means the street feels safer and more interesting. Retail experts say that most people won’t venture past a gap of more than 50 feet or so between stores. When we were preparing the Downtown Redwood City Precise Plan, the consultant and staff team conducted an analysis of the existing entrance frequency in the area. It was pretty enlightening. 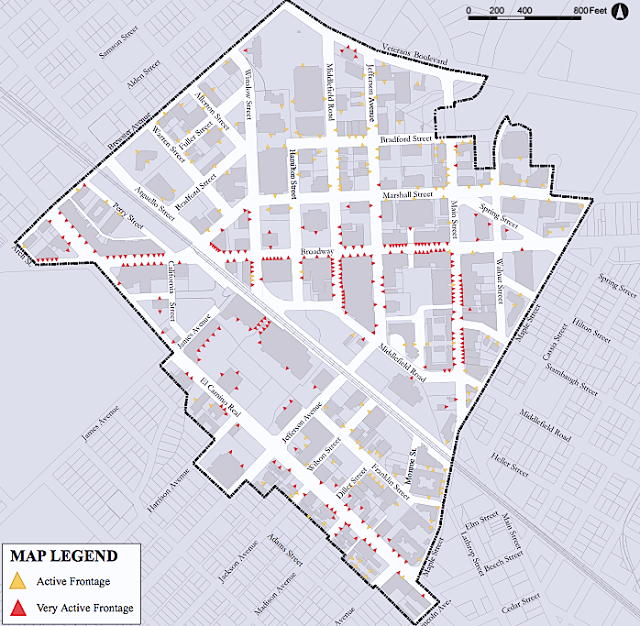 When a cool business comes along that wants to take up 300 feet along the main drag, it can be really difficult to say no. However, it is essential to work with them and get them wrapped with liner shops. The neighborhood, and the cool new business in question, will all be more successful in the long run if you can get this right.

A balanced approach to retail is critical to downtown and walkable neighborhood success. I hope this post and our experiences in Redwood City help to stimulate new thinking on the subject, and I look forward to continuing to learn from other cities who are making headway on creating vibrant urban retail and streetlife.